Here and there, as I shoot some plates, I'll be supplementing them with the same scene shot on both film and digital to allow for an interesting comparison between the blue sensitive media of the plates, the panchromatic, ortho, or color media of the film, and one or more settings on a digital camera that may mimic or differ from that of the non-digital media.

Following are three takes of another scene in Baltimore.  Today's trip makes a stop at the Union Soldiers and Sailors Monument, and was taken the day after last week's shot along Linden Avenue.  Unlike the previous day, this Sunday emerged vivid and sunny, with remnants of the snow of the evening before still lingering.  The 109 year old monument has stood at this spot since 1959, after a relocation from nearby Druid Hill Park necessitated by highway construction.  The site near the Wyman Park Dell works well for this monument, and it has since seen its surroundings changed in ways more befitting it, as the southbound lanes of nearby Charles Street that used to curve into 29th Street encroached more upon this monument than they do today.  The change in traffic pattern has made this site more pleasant and relaxing as a result, and its a periodic stopping point for me to do for some quick photographic wanderings.

With a few hours to burn as a loved one was at a medical appointment, I elected to make the stop past this monument to do my "triple take" as it glimmered resplendent in the noon day sun.  My plate camera was a 6.5 x 9 Zeh Zeca which has been something of a guinea pig among my plate cameras.  It came to me in a bulk auction sporting a basic lens mounted on a worn out shutter that was salvaged from a Univex TLR.  I'd tried a couple of "transplant" lenses upon this camera before electing to give the Meyer Gorlitz Trioplan 10.5cm f/4.5 from my Balda Pontina an indefinite home upon this platform. Supplementing this was the same rediscovered Yashica 35MC stocked with Eastman Double-X film that was featured on last week's entry, and the same Nikon J1 that I'd recently snapped up.  I fired off shots of the bright scene using all three cameras, with only the Zeca tripod mounted to accommodate the slow speed of the dry plates. 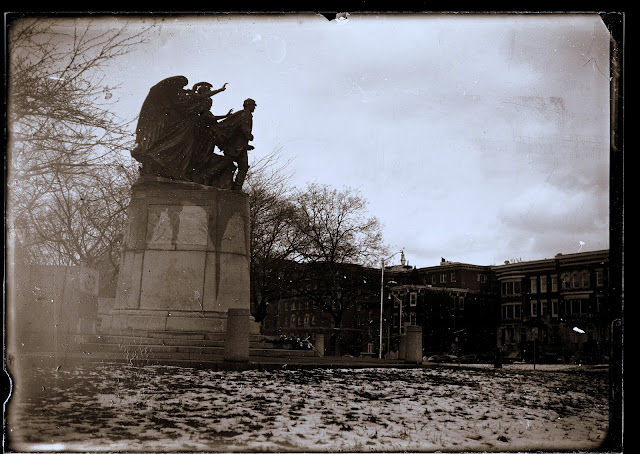 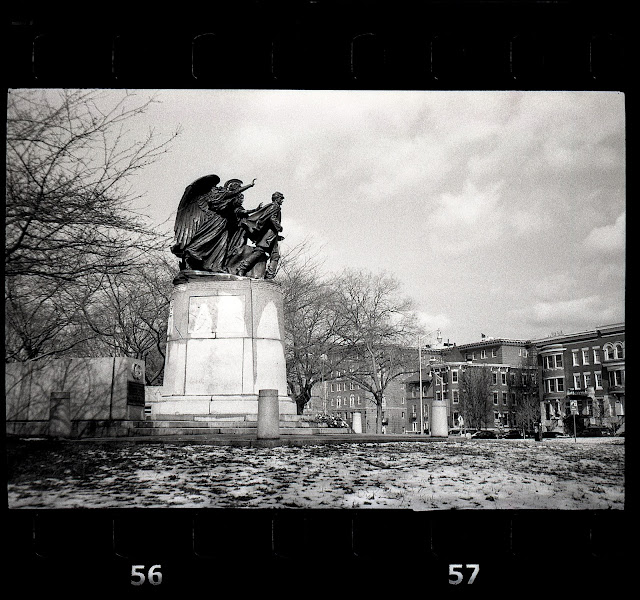 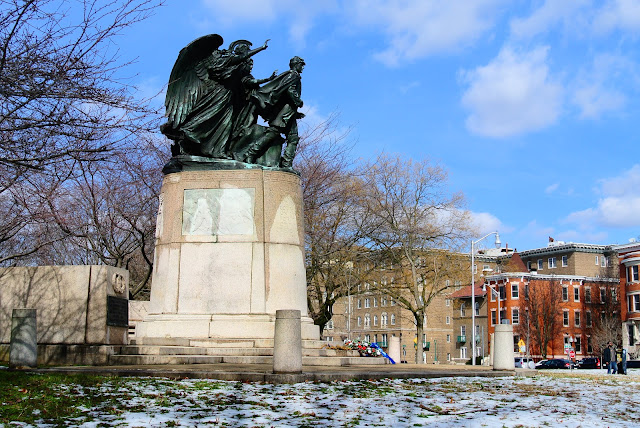 Unlike last week's entry in which the presence of color detracted from the image, the first thing I notice is that I actually can't help but favor it here, which actually came as something of a surprise to me.  It's also apparent to me that the plate version of the image is flawed.  I didn't give it enough exposure (at least for scanning), so the details of the monument are rendered indistinct.  As well, a bit of a light leak is evident across the left side.  These flaws unfortunately leave the plate exposure as the least liked of the three in my eye.  Yet again, the Yashica delivered some wonderful results on the Double-X film stock, albeit with some softness around the corners.  It is just a really nice rendering to me.  However, the color version on the J1 just seems to give off something pleasing to me that the monochrome versions lack, and which just seems to give it the slightest edge in my book.

Though all three cameras did a commendable job, the medal count after this second round is:
Plates: 1 Gold, 1 Silver, 1 Bronze
Film: 1 Gold, 2 Silver
Digital: 1 Gold, 2 Bronze
at 09:00