One of the defining characteristics of a photographic image is "film speed," an attribute, since carried forward to the digital world, to describe the sensitivity of a film or digital sensor to light.  Higher "ISO" speeds of a film or sensor setting allow for faster shutter speeds and narrower apertures to freeze action and increase depth of field to better guarantee focus.

Most digital cameras now START at ISO 200 on the low end, and many promote usability at ISO ratings of 25600 or higher.  This is quite a change from even the recent past of both film and digital photography, where ISO 100 was generally considered "baseline" with ratings of ISO 800 or 1600 considered to be the extreme high end.  It is now typical for a digital camera user to routinely shoot in ISO400 or ISO800 in broad daylight.

The film is a repackaged product of the Film Photography Project, using Kodak stock 2254 low speed duplicating film packaged into 35mm cassettes.  Though the original film is not typically intended for camera use, there is certainly nothing prohibiting its use in the world at large, and the availability of it in 35mm rolls allows one to use it creatively.

What purposes might one use such a super slow color negative film?  A few things come to mind. First, use of really slow film allows for shooting in full sun at wide open apertures, particularly when shooting older film cameras whose fastest shutter speeds are typically in the range of 1/250 to 1/1000. An f/2 lens can be shot at about 1/100 of a second wide open, allowing daylight photos taken with minimal depth of field and enabling one to see the lens' bokeh characteristics.

As well, one can also stop the lens down to smaller apertures like f/16 in daylight or overcast and take exposures of several seconds to deliberately blur subjects, or to make them vanish almost entirely, leaving only a transparent smear.  It's all part of the fun of photography, and something I wanted to try, so I did, and here are my results. 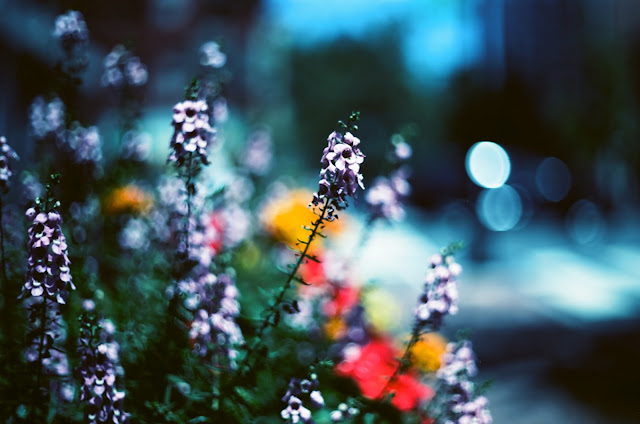 One use of such a slow speed film: taking shots under full sun wide open to get the most use of aperture.  Here, a Schneider lens with a wide open aperture of f/1.9 provides very shallow depth of field in this view.

Beautiful and a Bit Bizarre: The Exakta VX

A little while back, I finally gave 35mm another try, by reactivating a Praktica FX3.  The experience was interesting to say the least, and while I wasn't over the moon about dealing with some of the ways of the old camera, I was certainly open to seeing what else might be a usable option that would allow me to fire off a few more frames and be able to experiment with some 35mm film options that are not available in 120.

Around this same time, I began peeking about a Facebook group of Vintage Camera Collectors, when a particular camera, endeared by a number of people there, caught my eye. Reportedly built like a tank and glimmering in a mix of aluminum, chrome, and black leather, it was an SLR camera that carried with it a timeless beauty, predating the decades of austere machines that would copy its basic premise and leave us with endless sterile designs. Like the Praktica, it was known for having a few quirks, but many of its users loved theirs, and I was determined to join their ranks.

And thus I set about acquiring one of these marvels.  Meet the Exakta VX: 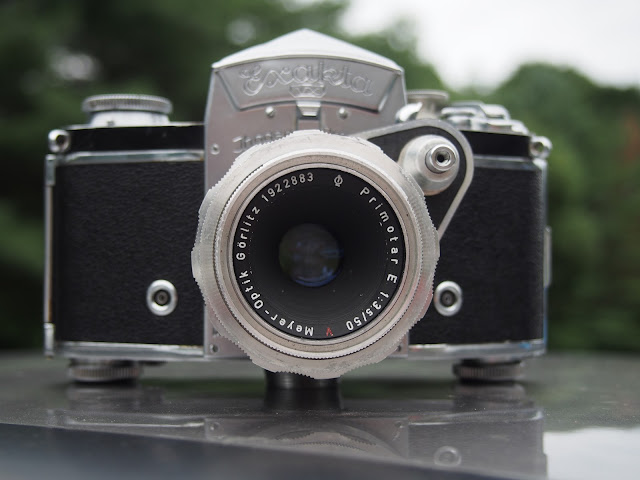 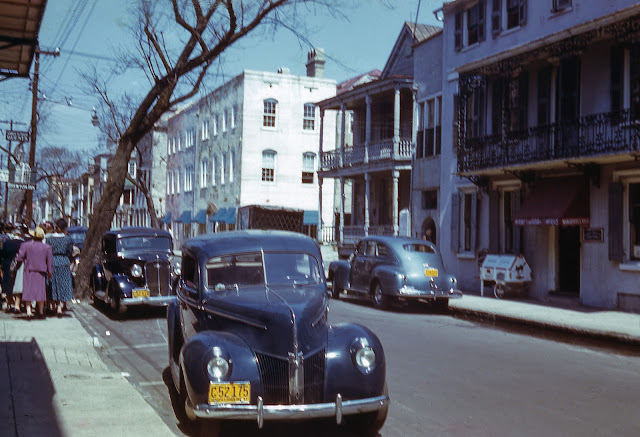 The gum had hardly set on the roll of Rollei Retro 80S that I had finished in the Seagull for the Film Fun Folio #10 feature, when I elected I wanted to feed the Seagull another roll of black and white.  Impressed with some of the dramatic skies I had gotten from Fomapan 200, I wanted to try to put this film to use once again to try to maximize this tendency, and here are the results.

1 - Ellicott City, MD - f/3.5 1/300 - I started the winding process too soon in the Seagull, so the first exposure was not aligned with film, losing this one in the process. 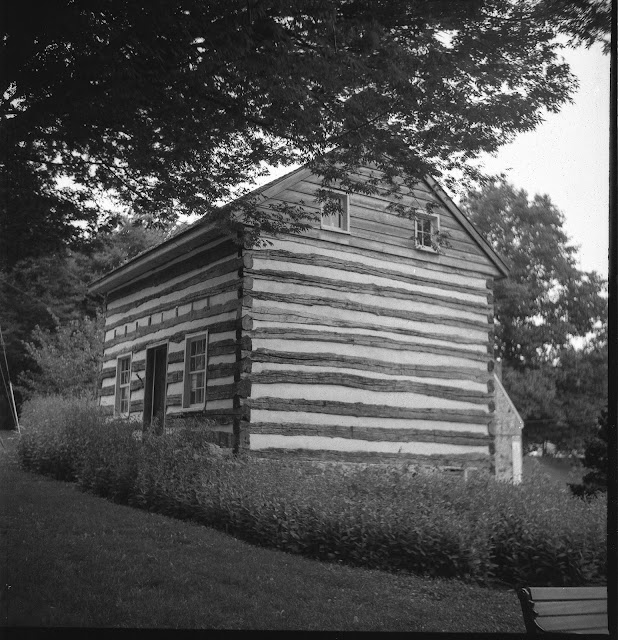 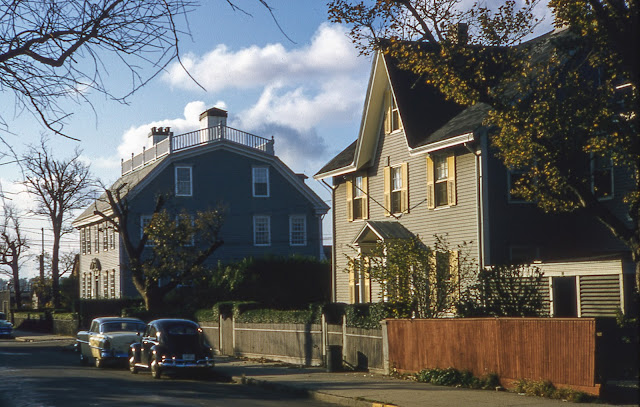 What: Afternoon Shadows
Read more »
at 08:00 No comments: 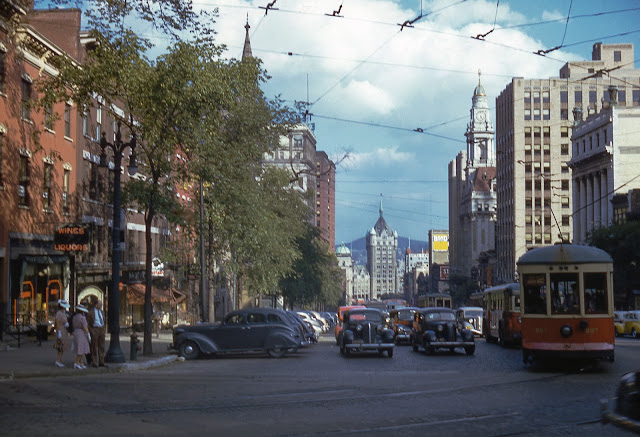 On my (now not too) recent trip westward to Oregon, I made it a point that I would ensure that I would aim to have one scene that I would shoot with every color film camera at my disposal at the time.  As it was, I wound up holding off using my last shot on two of these cameras to ensure that I could perform such an experiment.

Finally, on the afternoon of June 20, at a stop called Corbett's View, overlooking the Columbia River Gorge, I took the opportunity to snap away to get results that I could compare.  The samples, already featured in several of the Film Folio features, are shown below 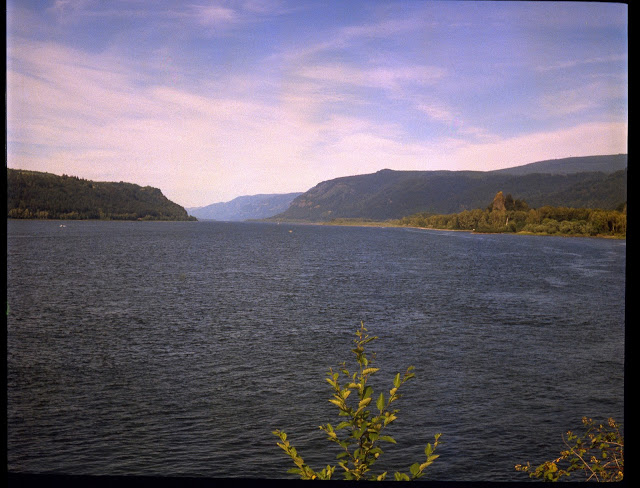 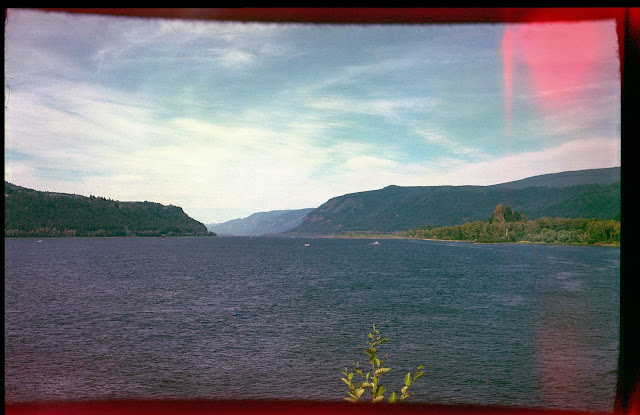 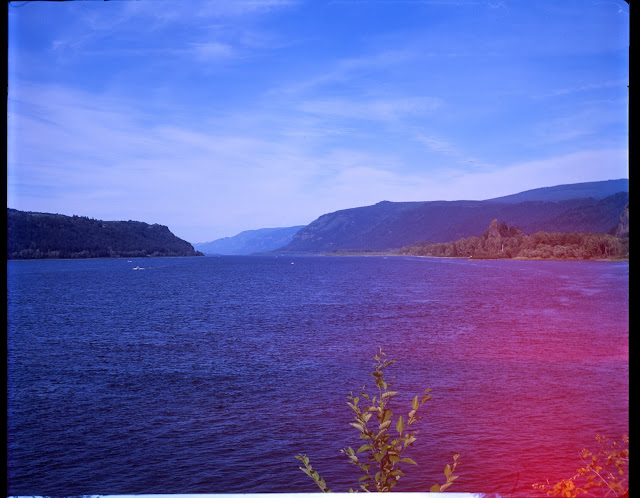 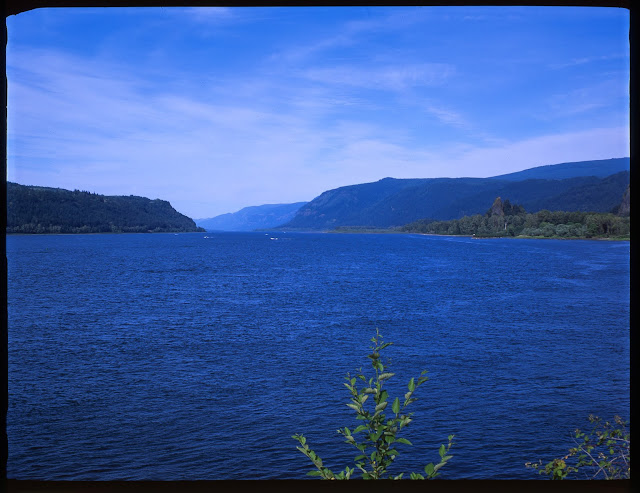 Overall, light leaks aside, there is a lot of differences in how this same scene was rendered on four different cameras and films.  I thought I'd have a clear "winner" in the batch, but I can't say that I do.  Nor can I say that one of these completely fails in its rendering.  It is a very interesting example of how the same scene can be given a remarkably differing appearance based largely on the film.

And as we head into colder weather, I'm certainly glad to have these vestiges of a trip west in warmer temperatures! 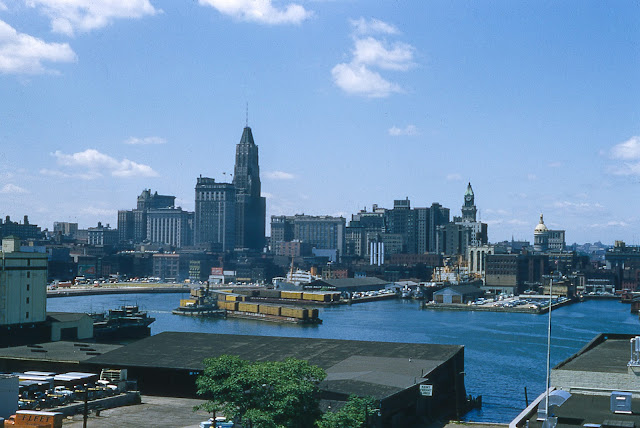 Velvia is a truly lovely medium with which to work, as it yields intensely saturated colors and excellent grain for landscapes and scenics.  However, it does not come at a particularly cheap price.  Thus, when armed with just a single roll of the stuff and a number of potential hosts, it is not always easy to pick a camera in which to shoot it.  However, as my Oregon trip was in its final day, I had to make just such a decision.  Since I'd just run a roll of Velvia 50 through the Lisette and was optimistic about the results, I elected to stay the course and give the Trioplan lens another chance to team up with Velvia and provide some outstanding color images.  Besides, shooting images on the 645 format allows for twice as many shots as with the 6x9 cameras, an important consideration when keeping within a budget. 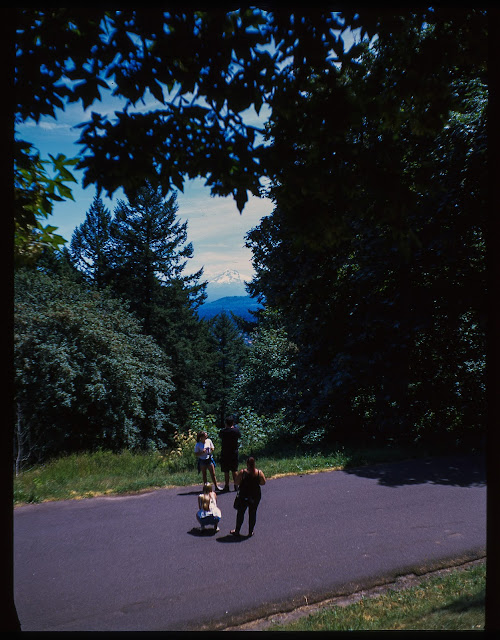 1 - Portland, OR - f/9 1/50 - A bit of atmospheric haze made capturing distant Mount Hood something of a challenge, one that Velvia was up for, and in managed to put just enough contrast in the scene to make the peak discernible in the distance.