Roughly three years ago, I elected to jump aboard a Kickstarter "crowdfunding" effort for the first time, namely one to rescue invaluable film production equipment to enable the resumption of photographic film production in Italy, with an expected reward to me of snapping up a few rolls of E6 transparency film for my financial support.

Yesterday, I had my first chance to sample some of the wares of the down-scaled film production plant in Italy.

Though not the 120 format color transparency film I'd initially expected to be using as a "thank you gift" for my support, I was thrilled nonetheless to have the opportunity to shoot Ferrania's first public product since their small core of workers reinitiated their coating lines roughly six months ago.  This was my chance to shoot Ferrania P30.

P30 is based upon a classic cinema film formula used by legends such as Federico Fellini.  It purports to be "silver-rich" emulsion that can yield a classic cinematic look rich in tonality and contrast to deliver stunning images with strong black tones often absent from many contemporary emulsions. As a Kickstarter backer, I was able to pick up 5 rolls of the film at a modest discount on a pre-sale promotion.

Order fulfillment was nothing of the likes of Amazon's "Next Day Shipping" but this was to be expected, given the small staff of Ferrania still had a number of production and distribution challenges to iron out as they worked through the allotment of orders in this "Alpha" batch, which sold out in a matter of a couple of weeks.  And while waiting for this much anticipated film sometimes seemed to take an eternity, I was quite pleased to see the arrival of the box with my 5 rolls of Ferrania P30 enclosed.

I was also a bit panicked. With 5 rolls of scarce film and numerous cameras to select from in which to shoot this film, I was a bit overburdened with the task of choosing which cameras would be best to conduct my own bit of "testing" on this classic emulsion.

However, being ever a bit quirky with my ways, I couldn't resist the urge to do something a bit "unique" with some of my P30.  I was also interested in seeing some results from this film without having to blow through an entire 36-exposure roll before seeing the first shot.  I elected to "split" the first roll between two cameras, and took the rather unconventional option of spooling it onto 127 backing, for use in my Agfa Cadet A-8 camera.

Yes, while others were using their limited allotment of this film in their finest machinery worth hundreds if not thousands of dollars, I was snapping off my first sample shots of this coveted film in a $10 box camera.

Truth be told, it wasn't a bad idea.  Not only would I get a chance to run through the exposure and development process, while acquiring a few "lessons learned" prior to the full completion of the first roll, I'd have a chance to use one of my favorite cameras for "sprocket scans" and get some novel 35mm x 65mm exposures. Besides, the use of a 127 camera for Ferrania film had plenty of precedent, with Ferrania having produced both cameras and film in this format in their heyday.

After going through the respooling process, firing off 8 shots on the film stock was a piece of cake. Though the mid-Atlantic was in the midst of a mid-Summer heat wave, my lunch hour in the Nation's Capital was one of sunny conditions.  I elected to shoot 6 of the first shots at lunch and save two for a detour on the way home, as intermittently cloudy skies and afternoon thunderstorms moved through the region.  My hope was to get some variance in the lighting conditions for this initial roll, given that this basic camera lacks even a diaphragm setting to stop the lens down to adjust exposure.

Developing the P30, I elected to start this first roll by trying HC-110 in a freshly mixed 1:63 dilution for 12 minutes with 15 seconds of gentle agitation every 2 minutes.  This process is somewhat contrary to Ferrania's recommendations for developing this film, in which they recommend a less dilute formula with near continuous agitation that is more consistent with cinema type development processes.  I noted that the acetate film stock was a bit thick and stiff and as a result, slightly challenging to get going on my steel development rolls.  Unlike many other films that leave a color cast in the developing solution after development, the developer poured out with a neutral cast.

The negatives that emerged after the final bath of Photo-flo seemed to be well exposed and had adequate contrast, a relief given the lack of exposure control available to me as I took the inaugural images.  The film dried to a fairly flat result that whose somewhat thick stock was easily loaded into my full width scanning tool.

The scans from this first batch however, are missing the desired snap that I've observed in some of the other results posted online, but still offered a good starting point to learn more about this film and its character, as well as to strategize some changes possible as I shoot and develop more of this film. Having these images as my first set have certainly given me a chance to think of how to better hone future shots on this film to get a more desired outcome.

My first shot on Ferrania P30.  Looking past the sharpness missing from nearly every part of the frame, I'm a bit more disappointed to see a lack of deep black tones in the shrubbery.

As American as the Fourth of July: The Kodak Instamatic 704 and 804

"You know, we once made stuff here."

It's a common refrain still prevalent among older Americans, and is something that can be particularly difficult for a larger percentage of our population to relate.  I tend to consider myself as one who can occasionally forget the significance that the U.S. once held in the manufacturing world as I type away today on my Chinese made computer, uploading some digital photos taken on a camera made in the Philippines, embellished with a Japanese made lens, and adding scans of film shots done on an Indonesian made scanner.

Yes, the United States once had a robust manufacturing sector, which certainly extended to the world of photography, with names like Kodak, Argus, Detrola, Revere, Falcon, Ansco, Polaroid, Bolsey, Universal, and others all competing head to head in a crowded marketplace for the photographer's dollar.

So what was the most American camera model of all-time?  Some might say the ubiquitous Argus C3, a classic example of a well built camera that remained nearly unchanged for a production run spanning 3 decades.  Others could opine for any of the Polaroid Land Camera models as being stellar examples of American ingenuity.  Still others might pick a wild card like the Bolsey B2 as a classic example of an immigrant landing in this country and setting forth to accomplish his dreams in a new country.  And for the curious, there is certainly the story of the Univex cameras resulting from a pair of capitalists putting their minds and resources together in the midst of the Great Depression.

My answer for the most "American" camera of all time uses much more simplistic logic. There is no holiday more American than Independence Day, often simply known as the "Fourth of July."  So is there a camera out there that is as American as July 4th?!? I'm not sure there could exist a camera as American as Independence Day as this one... 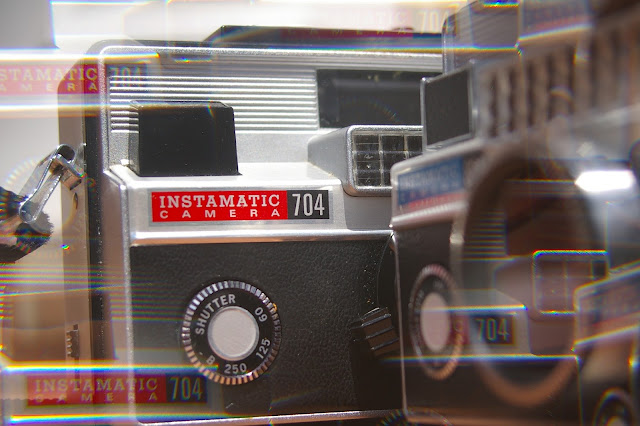 All this camera needs is some deep blue leather on the front and some white stars and it would be the ultimate "American" camera.

The Kodak Instamatic 704, along with its upmarket sibling: the 804, represent some of the finest American camera craftsmanship out there.  These sturdy 126 format cameras, produced between 1965 and 1969 are a particularly endearing pair of photo taking partners with complementary red and blue emblems that truly portray a patriotic air to them.