It's 2018 - Picture your typical consumer taking snapshot photos today on both their every day outings and special moments. In the vast majority of cases, their tool of choice is a smartphone, and the typical post-photo tendency is often to look at the screen of the phone to see how the image came out, should it need to be taken again.

Now let's dial the clock back a bit shall we?  Nine years to be exact to 2009.  The Smartphone is certainly present, but its still largely in its infancy, while the more common flip phones are often used for taking rudimentary digital snap shots in a pinch.  However, a more established tool of choice is the digital consumer camera, often offering up a healthy zoom and an inflated megapixel count.  These are typically the tag along of many a consumer who wants to be able to take photos that may be worthy of printing.  And, just as today, the typical post-photo tendency is often to look at the screen on the back of the camera to see how the image came out, should it need to be taken again.

Now let's dial the clock back just ONE more time. Going back another nine years brings us to the year 2000. The consumer smartphone is little more than a dream in its designer's mind, while the digital consumer camera prevalent in 2009 is largely in its own infancy, with 2 or 3 megapixel sensors offering up paltry image quality hardly suitable for keepsake printing or enlarging.  In this era, just 18 years removed from our present landscape, film is still king, offered readily across a range of retail outlets. Minilabs are found in nearly every shopping center and general big box store, and the majority of the photos taken by your every day consumers are done on a variety of compact film cameras.

However, unlike 2009 and 2018, the typical post-photo tendency is NOT to look at the screen on the back of the camera to see how the image came out since no such screen existed, leaving the consumer to wait until the film was developed to see how an image came out.

But for one very odd exception... 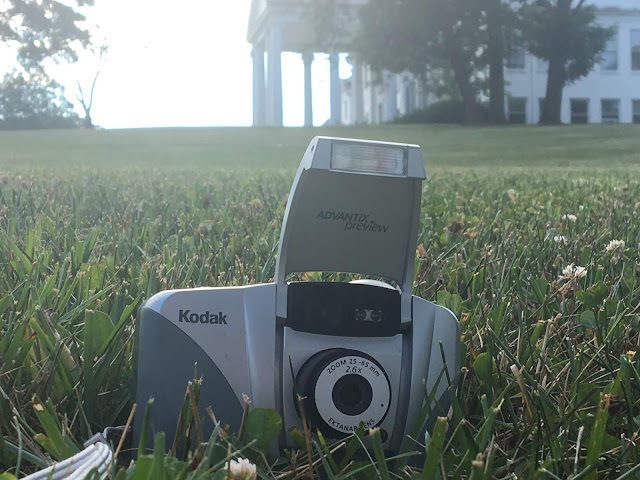 From the front, the Advantix Preview looks largely in line with many similar compact cameras of the era, offering a modest zoom on a rather slow lens primarily for taking snapshots.

Released in the year 2000, the Kodak Advantix Preview can be described as many things: a digital camera that wasn't, a bizarre bridge of two worlds, or a poorly executed hybrid concept for which demand never really existed.  For a handful of us film-happy dreamers, it can be considered as a foundation for a future which could have conceivably existed, but which never came to be.