A (somewhat less than) Super Ikonta

All told, I'd had a lucky streak when it came to picking up cameras from ebay.  I had picked up a very capable TLR in the Yashica 12, as well as over half a dozen medium format folding cameras.  While I had encountered a few letdowns along the way, I came away from each initial test roll of a new camera with usable photos as well as some valuable insights on what situations for each camera would be useful.

In early December, I stumbled across a very attractive auction listing for a very good looking Zeiss Super Ikonta, for an opening bid of just under $100.  Since these typically sell for upwards of 3 to 4 times this amount, I handily placed it in my watch list for revisiting.  By the afternoon of the auction's closing date, there were no bites at all on this camera, and a good part of that was likely due to the listing calling this simply an "IZEISS COMPUR CAMERA."  Thus, it didn't appear in search results for "Zeiss" or "Ikonta."  I figured I was worth an early Christmas present to myself, so I bid, and managed to win it for just over $120,  a decent score considering its value.

This Zeiss was the "premium" version of my other Ikonta cameras in that it had a coupled rangefinder to assist in focusing, thus giving it the "Super" moniker.  Further, it had a Tessar f/3.5 lens that was the high end counterpart to the less sophisticated Novar on my other 6x9 format Ikonta 521/2.

The camera's seller was apparently a widow selling off her husband's camera collection, and offered little description in the way of the functionality of the so there was certainly some risk involved regarding the functionality of this classic Zeiss, and as such, it was being sold strictly "as is" with no guarantee of functionality.  Regardless, it looked to be in excellent shape, so it seemed that if nothing else, it was at least worth what I had paid for it. 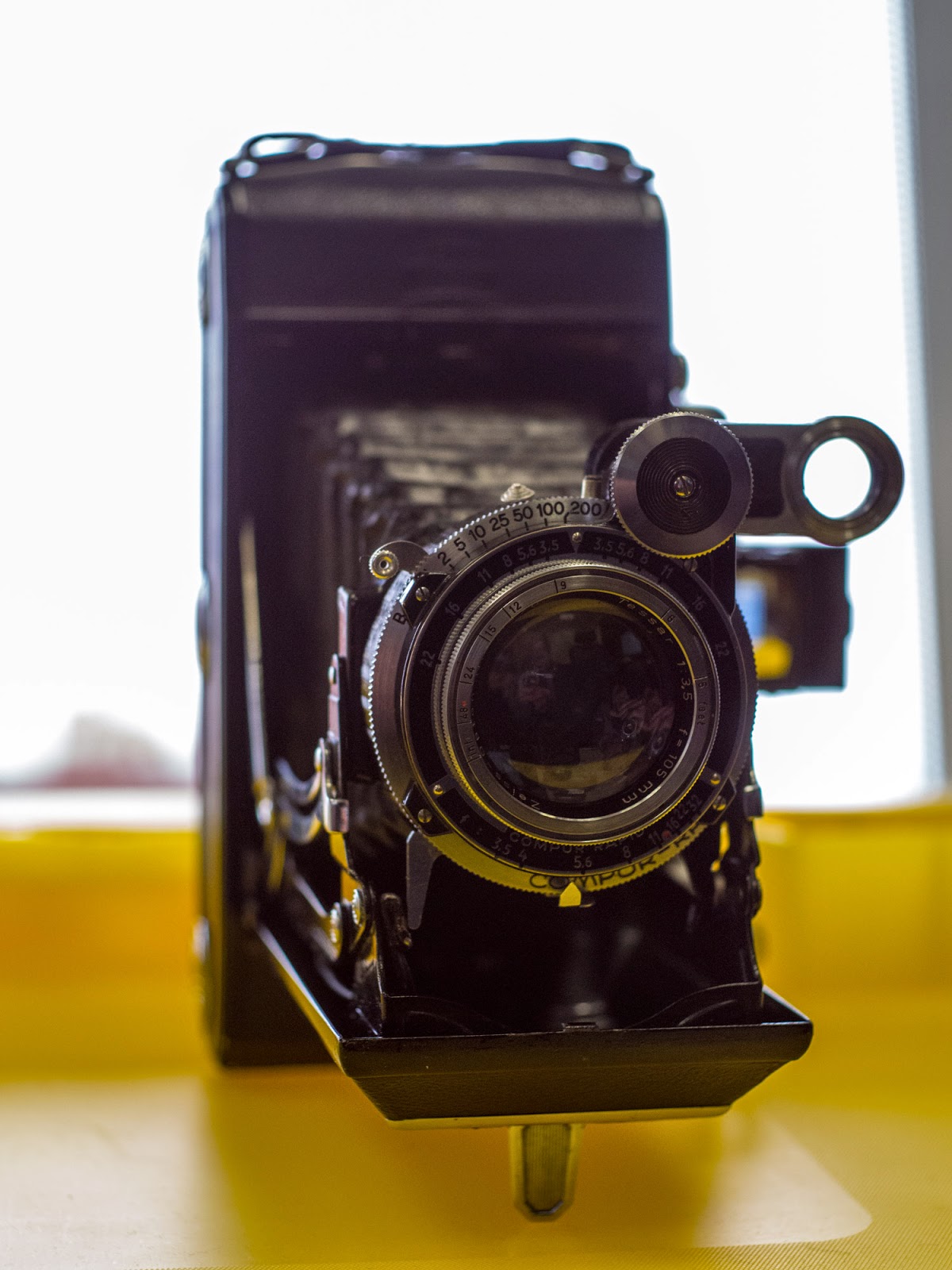 The Super Ikonta 531/2 appears quite similar to the 521/2, with the most pronounced difference being the elaborate rangefinder mechanism that the user swings into place after unfolding.  To focus, the user looks through the porthole in the back of the camera, seen below, then composes the image using the Albada style flip up finder. 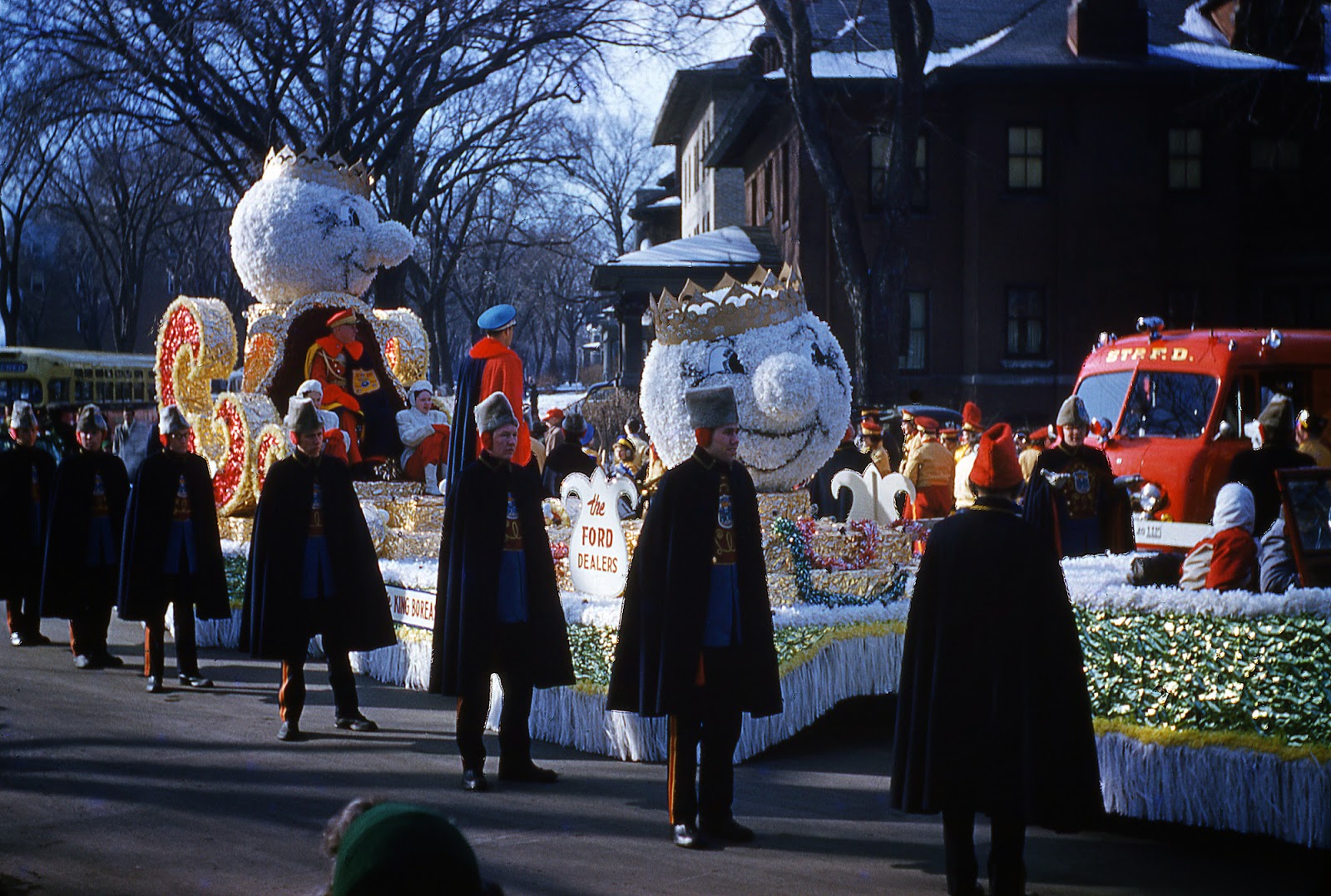 Exposure: Film Notes on the Go!

If there is one place where the world of digital photography reigns supreme, it would certainly be information.

One need only peek into the Exif data in one's RAW or JPEG files to discover loads of information on the accompanying images, including, but not limted to the date taken and the camera used, as well as the ISO setting, aperture, and shutter speed.

Those last two bits of information can be extraordinarily handy, particularly when putting a new camera through its paces to see what it is capable of.  Aperture is perhaps the most important facet to know, as it gives you a good starting point of knowing the capabilities of a lens regarding peak sharpness, depth of field, and bokeh characteristics.  It is an invaluable piece of data to know when looking at a finished image, so that the photographer can optionally use similar (or different) settings to achieve their desired look in the finished image.

Film however, gives no such information with its image, unless you are using one of the few models with an optional "data back" to etch the information onto the film, or record it internally.  All of my film cameras I currently use come from at least two generations ago, and function without batteries, so there is no such luxury to be had.  It is thus up to me to try to remember what my settings were on a particular image, or I can write it down.  And I am trying to do more of the latter approach given that I'm pretty awful at doing the former approach, save for a few memorable experiments such as time exposures or shots taken with the aperture at its widest.

The question quickly becomes how best to do this.  One can carry a small pad and elect to jot down exposure notes or other bits of information if they are so inclined, but I personally find I need a little more coerced and simplified structure to prod me into improving my exposure note taking.  I'd explored the online marketplace expecting there may be some sort of app to track exposure notes readily, but I came up empty handed.  Besides, in reality, if it is too much trouble to jot down a little bit of info on paper, firing up an app every time I take a photo would certainly not be any more convenient.  Thus, I determined it was up to me to figure out an "analog" solution that was convenient and easy to use, and I elected to try a pair of formats to determine what works best for me. 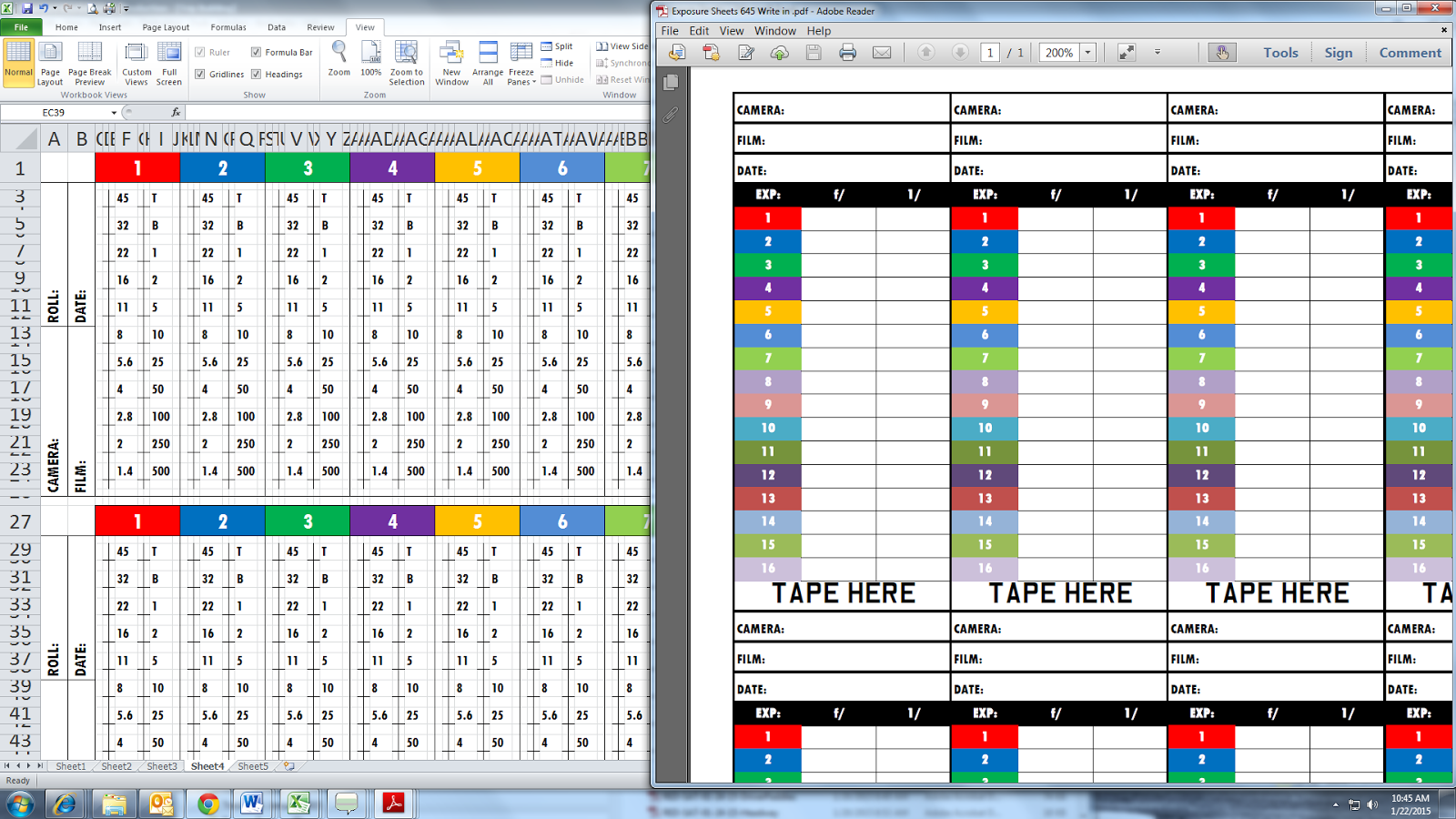 Resourceful use of an MS Office Suite Application helped me create two very different styles of sheets to take with me on the go and assist in recording exposure information. 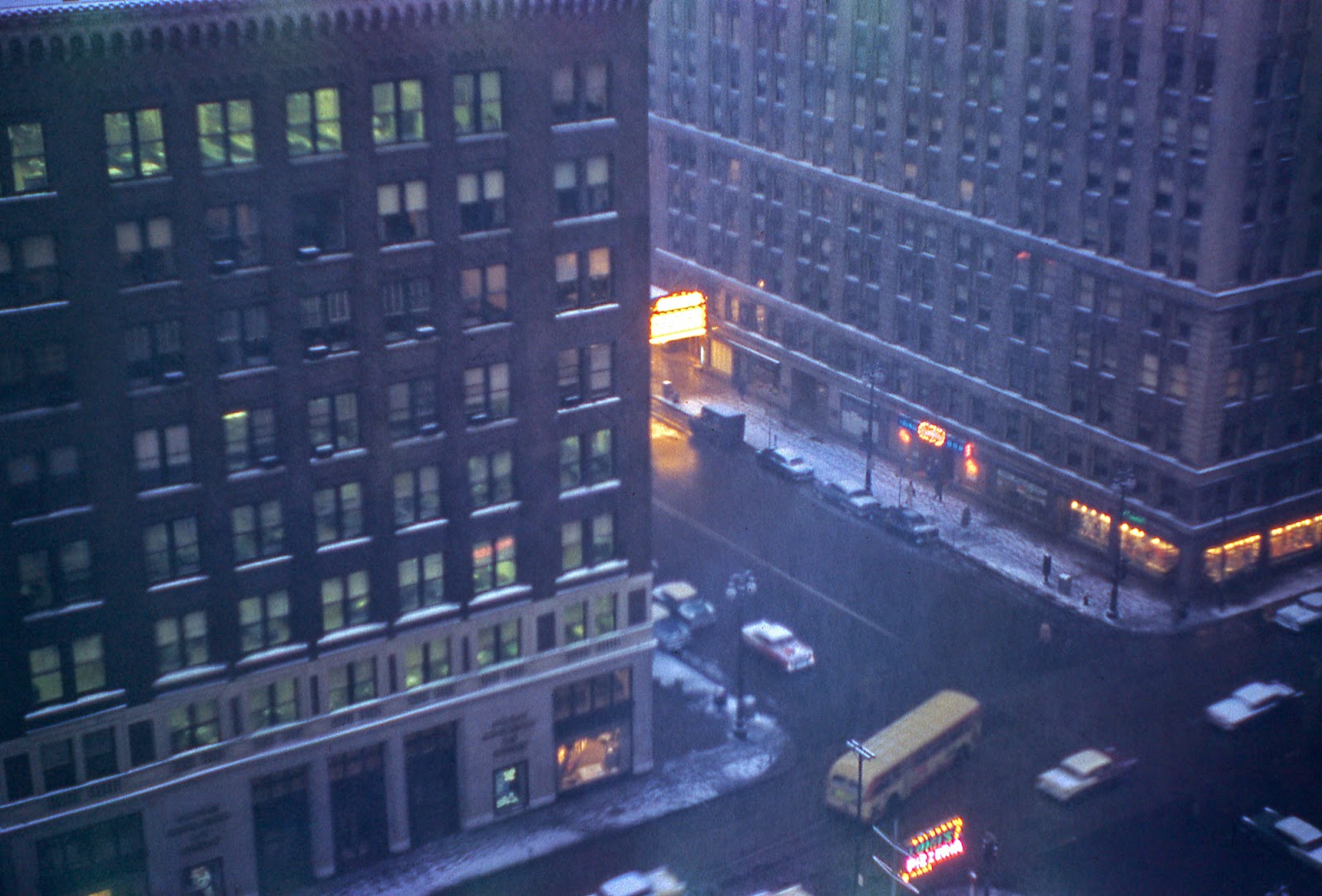 What: Overhead view of a snowy business district.
Read more »
at 08:00 No comments:

Sometimes there are plenty of reasons why you shouldn't make a certain purchase, but inevitably, one key feature leads you to pull the trigger.

Consider this.  I had begun to feel like I was hitting a saturation point as far as medium format folding cameras are concerned.  I had a few 6x9 folders that I liked as well as a very capable pocket 6x4.5 folder for which I invested in servicing to make it fully functional again.  I never really considered myself interested in getting a 6x6 folder since I already had a pair of TLR cameras for that format, and I wasn't the biggest fan of the 6x6 square format in the first place.

Then I spotted it: a fairly pedestrian looking folding camera with one very appealing feature, a comparatively fast Schneider f/2.9 lens.  Add to this that it was willing to come home with me for only $25.  I chided myself for being such easy click bait for a bit, but ultimately elected to take the chance on this one.  It wasn't the prettiest camera I'd seen, but I knew too well that my adoration of the look of the Hapo 10 had led me down a road of disappointment.

After pulling the trigger, the question then became "just what did I buy?" 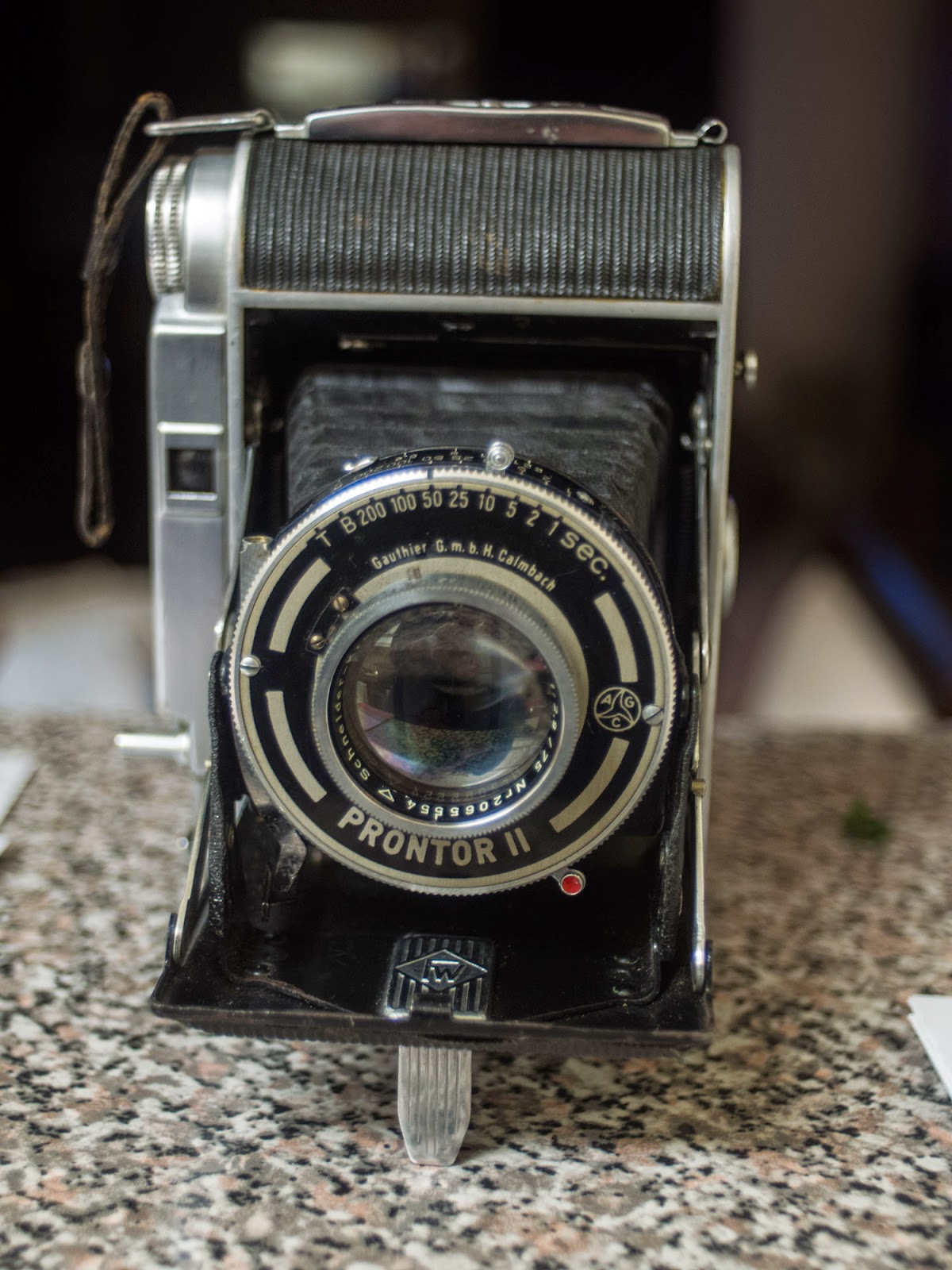 The mysterious camera with markings but no name. 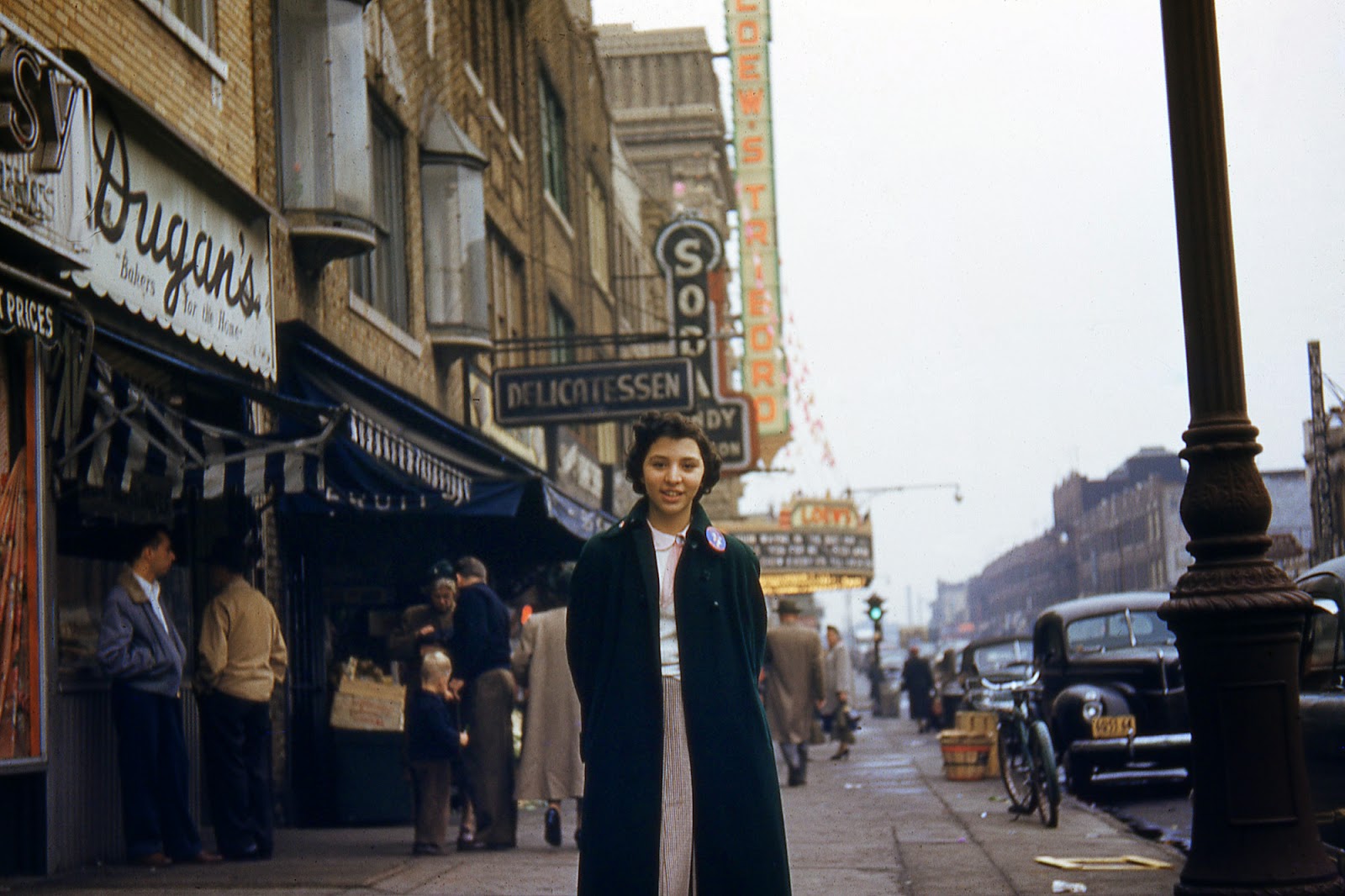 What: Young Lady in the Shopping District.
Read more »
at 08:00 No comments: If there was one thing that would get people to use color film from the 1940's to the 1960's, it would definitely be a parade.  In several months of collecting vintage slides, I have encountered numerous parade photos that have been featured on the Classic Kodachrome features, with more to come. These are interesting not only for their inclusion of people of the era, but also for the backdrops that were otherwise ignored as photo worthy during this era.

A few months ago, I spotted an auction for a number of boxes of Kodachrome slides of one of the most famous parades, the Tournament of Roses Parade held in Pasadena, California, and now in its 126th year.  I placed the opening bid of $15.00 and expected an outbid, but it never happened.  I won the lot, and was now the owner of a fascinating slice of history.  And so today, as the parade marches on, it seemed like the appropriate time to spotlight a nice selection of these shots.

The photos were taken by Walter G. Linz of Santa Ana, California, and cover the 1950, 1951, 1952, and 1963 parades.  While Mr. Linz stayed in the same general spot for each parade, he at least chose unique spots each year, helping not only to vary up the backdrop in these images, but also make it easier to determine which year each was taken.  The Kodachrome stock on which these were taken had buckled a little bit in the mounts as well as exhibited a bit of blistering, but fortunately the use of the Digital ICE technology in the scanner made their importation a rather easy process.  All that was required was a bit of contrast enhancement, tone curve adjustment, and a tweak or two to vibrance.

So sit back and enjoy four years of the Rose Parade, all of which are at least 50 years old, with some being 65 years young!

Our images begin at the very advent of the iconic 1950's, at a location east of the main business district of Pasadena.  The address of Johnson Motor Parts reads 2097, putting this near the intersection of Colorado Boulevard and Craig Avenue.  The area looks nothing like this today. 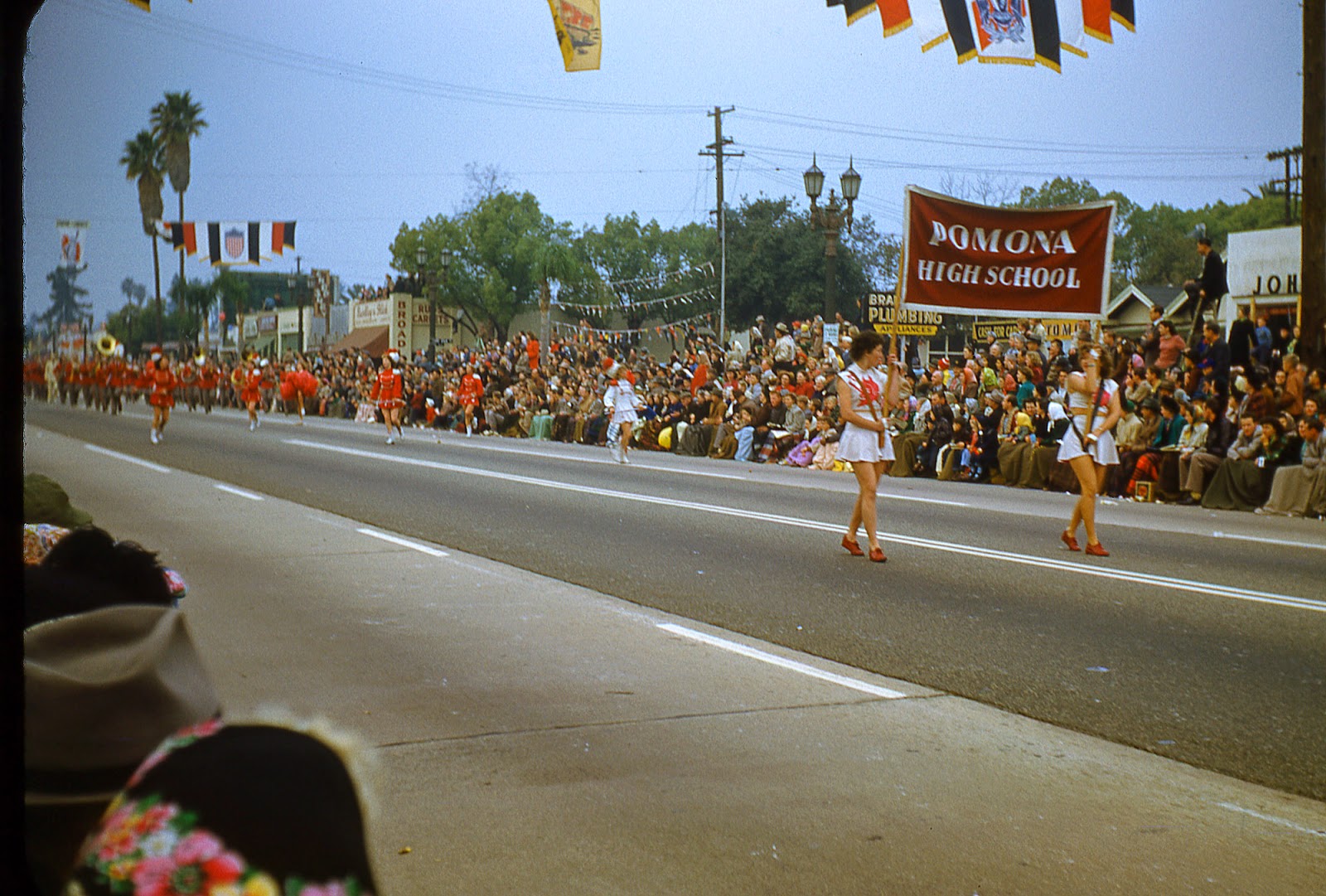