Challenging one's comfort zone admittedly is a good thing.  As big of a fan of HC-110 as I am, I did have to wonder what else was out there in black and white developers that might work well to give me.  As my supply of the syrup was winding down, I began to explore what other options might be out there, and was wondering what I might find to vary my stable of developers.

The desire to try a new developer actually goes a bit beyond simple caprice as I imply.  As much as I love HC-110 as a general purpose developer, I wanted to see what I might be able to find that might be a lower contrast developer, particularly for use on microfilm as well as Ferrania P30, both of which tended to have higher contrast in HC-110.  I'd seen some results of P30 in the Metol based Beutler formula, which really looked promising, and was about to pull the trigger on the needed powders when, on perusing the wide array of options from Photographer's Formulary, elected that TFX-2 was the perfect choice.  Similar in makeup to the Beutler formula, but in a 2 part liquid formula that could be used as a one-shot developer, TFX-2 also had some at least one follower who was using it as a stand developing solution!  It was just like taking my existing practices and just changing the ingredients!

Rather than jump directly into microfilm developing with TFX-2, I elected to do my first tries of stand developing of this developer using a couple of rolls of Ilford's Pan F+ film, a 50 speed emulsion known for being a bit heavy on contrast.  Using 12.5ml of both solution A and B in the 400ml tank for a 30 minute stand, I was quite curious to see what I'd get.  My first roll was a roll of 120 shot in a newly acquired Zeiss Ikonta 515/2, and my second roll was a cut down roll of 127 taken in my newly beloved Zeh Goldi.

My results show a mix of promise and concern.  Some are simply wonderful, while I find there are a few challenges that can result when using this developer, at least on the somewhat temperamental Pan F film... 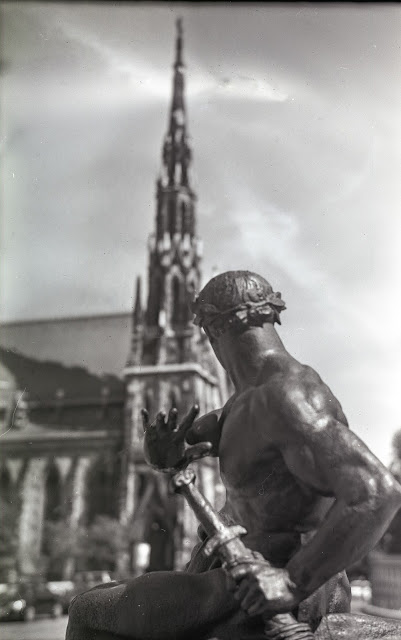 From the Zeiss folder, I'm instantly impressed by the first frame developed in TFX-2.  Though the sky shows some rather odd developer artifacts around the steeple, the tonality in the statue is nothing short of wonderful to me.
Read more »
at 10:00 No comments: 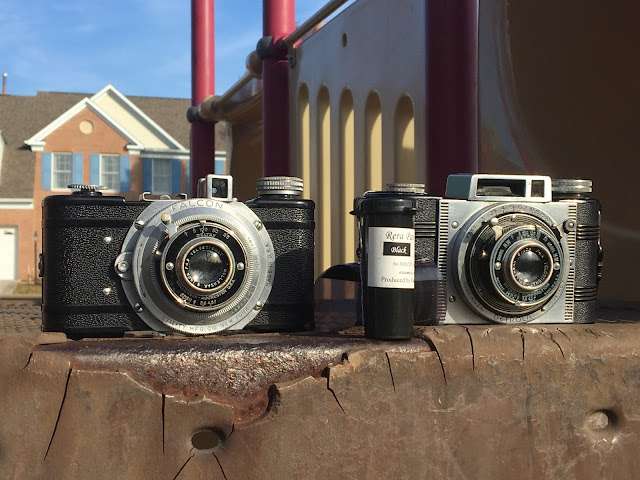 The two Seniors noshed on some Japanese fare, while recalling the days when their format wasn't at all obscure!

Similarities: It's as if someone built the shell of this camera for both makers to utilize in putting their own finishing touches and features on their version, as they are that similar.  Both are Art Deco era American Viewfinder collapsible 127 cameras whose design is rich in Art Deco lettering and design work, and as it so happens, both have tended to have a particular dislike of "homemade" 127 film, from previous experience.  Both also have Wollensak 2 inch Velostigmat lenses that have unit focusing instead of front element focusing.

If you have read more than a few of my posts, you'll soon note that I'm a bit of a sucker for what are often known as "obsolete" formats.  After successfully cutting down 120 film to feed old 828 format cameras, my attention later turned to 127 format models, and I began to expand my film cutting adventures to this format as well.  However, I discovered some 127 cameras weren't the most enthusiastic about using this custom slit film, often slipping in the film advance, or simply having many issues with film plane flatness.