Dutch Date - Part 1: The Nikon N75 and the Maxxum HTSi 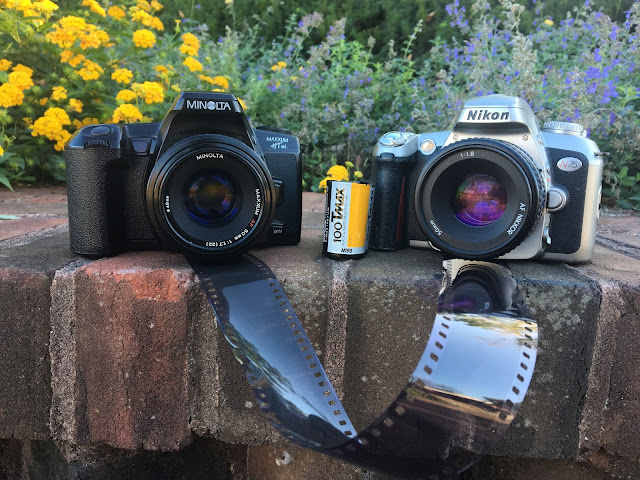 The two Japanese millennials sat and reminisced on their youth as they partook in a shared roll of a newer American classic: Kodak's TMAX 100.

Similarities: Both are "mid-entry level" SLR cameras dating from the last 10 years of film's dominance that are largely overlooked today by film enthusiasts, who instead opt for higher end models of the era.  Both were acquired as an extra of a multi-camera lot, and happened to function perfectly.

Differences: The models come from different makers, and have different button locations for some similar functions.  The Minolta allows for manual setting of ISO speeds and has a faster top shutter speed of 1/4000 second.  The Nikon has five illuminated focus points that can be easily selected using a pad on the back of the camera.


In a world of camera collecting and shooting, you're bound to acquire a few extras you'd never intended to snap up.  Typically, these come in the form of an extra camera body bundled in with a multi camera lot that contains something else of interest.  All too often, these extra pieces are either something broken, something that you already have, or something that is just not terribly interesting.

Of the last of those classifications, there is often room for a slight change of heart, one that happens when you pick up that camera, load it with batteries (if it requires them), and fire off a few test shots, only to realize "You know what?!?  I don't hate this!"

In most cases, I'm a terrible "Collector."

Though I may pick up vintage film cameras to a large degree, there have been few if any genres at which I've collected the entire set.  I don't need to have every Univex AF folding model.  Nor am I pressed to have the all black variant of the Pentax ME Super as well as the "SE" edition with diagonal split prism to round out my arsenal of that model.  And I'm never about to try to collect every lens offered for even the most meager SLR camera models.

But yet, I took an odd departure from my historical tendencies to snap up an example of each in one of the most endearing camera series that I've happened across this year... 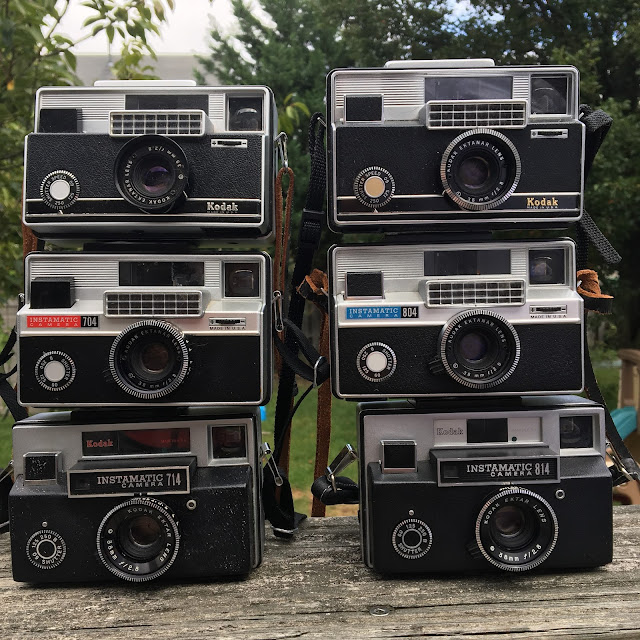 
The Kodak Instamatic 700 and 800 series stood at the top spot of the American-made Kodak 126 cameras, and embody a remarkable sense of quirk and flair packaged in a durable housing with a surprisingly usable feature set.

Looking to shoot film on a budget?  How about this "All You Can Eat Buffet" deal of the film world! For the cost of about 2 rolls of film, you are supplied with enough film to make about 20 or more rolls of film! This film has a nice slow speed and fine grain to allow you to open the lens up on most cameras in full sun, and it comes free of perforations, making an ideal candidate to stock 828 cameras with film!

So what's the downside?  Well, there's lots of contrast that needs to be tamed in order to get an image with a more pictorial feel.  And the lack of sprockets that makes this a great 828 film also makes it very difficult to use in 35mm cameras, with some models needing some degree of modification, with some other cameras entirely unable to use the stock.

This bargain film stock is microfilm, a long established medium of Archivists for the preservation of print media. Though never manufactured for pictorial use, this fine grained stock can be adapted for use in 828 and many 35mm cameras with a few caveats.

The most inhibiting of these caveats is the lack of perforations (sprockets) in most microfilm stocks.  This is film that was designed to be fed through a viewer with direct wheel contact, rather than fed through a camera with sprocket gearing and teeth.  This works fine in an 828 camera, but will slip when fed through manual advance 35mm cameras.  Many of the more modern 35mm film cameras with auto advance use an IR sensor that counts the film sprockets in 35mm stock as it advances.  With non-perforated microfilm, these cameras have no sprockets to count, and will simply give up and return the film to the 35mm cassette after attempting to load it.

For manual advance cameras that use a toothed wheel to pull film onto the take up spool, an improvised solution is to apply a layer or two of painters tape to the this wheel to increase adhesion and avoid the slippage that would otherwise result.  Within two minutes of trying this with a Ricoh KR30SP that I have, I had a camera that readily accepted the Microfilm stock.

Two 35mm cameras that will accept microfilm without any modification are the Canon 10S and the original Voigtlander Vito.  Both of these use a contact wheel that lacks teeth to advance film onto the take up spool.

So this all established, what are the rest of the challenges to using this medium?  The first would be supply.  Microfilm isn't typically found in the same places that those of us shooting conventional film pick up our supply.  Neither B&H nor Freestyle sells it, but it can typically be found on eBay.  If lucky, one can find single (100 foot long) roll sales for under $20.  It may take some patience and scouring, but it is out there.

Somewhat less challenging is the process of preparing a length of microfilm for use in a camera.  With 35mm, this involves taking a reusable cartridge, and either loading it with a length of film in the dark, or using a daylight bulk film loader.  Either method should work, but I used the former method, limiting the length of film to about an 18 shot roll.

I also loaded some 828 rolls by simply doing the same process above, but instead interleaving it with 828 backing paper (that the film was taped to on its beginning side) as I wound it onto an 828 spool. It wasn't long before I had three rolls of film ready to use in a variety of cameras.

Shooting this film involves some additional challenges.  I found that rating the Kodak Imagelink 1461 film at about ISO 20 seemed to give the best results.

I knew I would encounter the potential for a lot of contrast when developing, and elected to scale back my typical stand development time (using Kodak's HC-110 developer at a 1:99 dilution) from 30 minutes to only 16 minutes.  This resulted in some pretty thin negatives, but these scanned with no issues whatsoever.

Below are some samples from my first three rolls of microfilm - the "All You can Eat Buffet" of the photographic world. 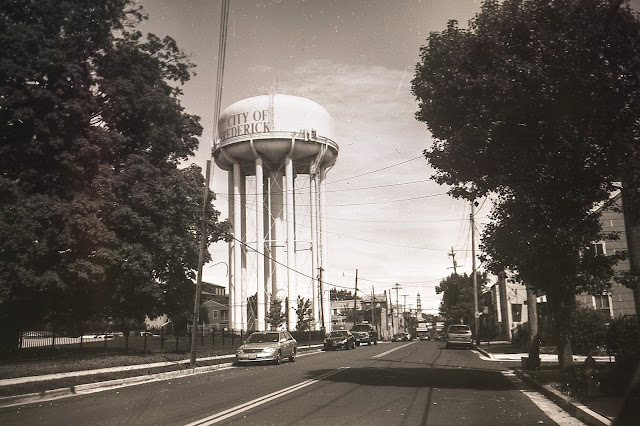 On a very sunny day, I ran a short roll of Microfilm through a Bantam f/8 828 camera.  This wound up working perfectly with the slow shutter of the camera, and delivered some particularly good images given the very limited capabilities of this basic camera. Contrast is a bit high still, but not in an overwhelming way.