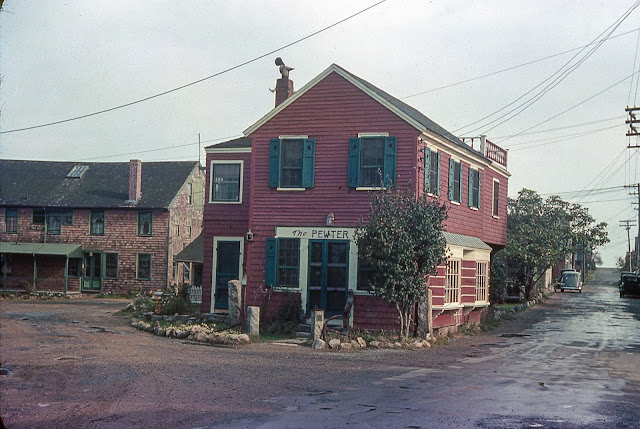 A few film photographers had asked me, "Why don't you give 35mm a try?"  And I had been repeatedly shelving the idea.

Perhaps I just needed a gateway to something other than 120.

After a period of some fairly cheap camera acquisitions, and a feeling of overwhelming contentedness with the 120 format, I'd begun a new period of complacency.  I'd felt that my stable of oddball medium format film equipment was pretty much more than I'd ever need, and really didn't feel the need to expand upon it any further by acquiring any more cameras of any format.  As well, I didn't see where most of the offerings in 35mm allowed me anything new in the way of shooting experience that I did not already have either in 120 or in digital. However, I was open to the idea of trying 35mm if I were to find a very affordable camera that offered something interesting in its shooting experience.

Interestingly enough, I found such a camera, and it was right in the curio cabinet in my living room.

Say "Hello" to the Praktica FX3: 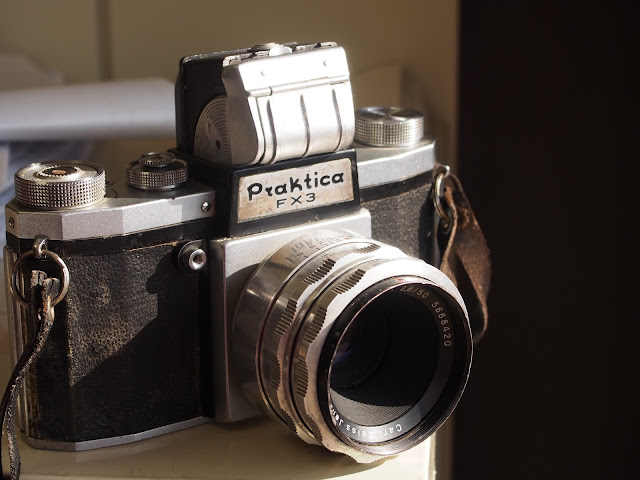 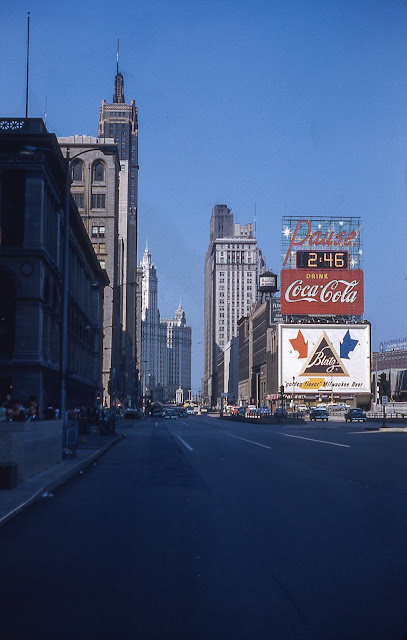 What: A moment in Time

You never know where you might get a tip about photography.  It can come in the most unexpected of places.  Somewhere above the badlands of South Dakota, a lady sitting next to me on a Portland bound Alaska Airlines flight took notice as I began to fill out the header information on the "Exposure Note Sheets" attached to some of my folding cameras, and began to tell me of an analog photography store in the far northeastern section of Portland called "Blue Moon Camera and Machine."  Intrigued, I checked out their website and found that they actually had a film in stock that I'd been curious to try, but had always seen as being out of stock at online outlets, or only available in a 5-pack: Rollei Retro 80S.  The film is a bit of a pricey one compared to other B/W film stocks, including even Rollei RPX25, but the curiosity to have a chance to try this film won out, and I made my way past this fascinating store during my stay in the Portland area to pick up a roll.  It was not until I got back east that I actually elected to use this film, opting to try it on the very camera that got me hooked back into film photography, the Seagull 4A-103. Not only did I think that the film would work well with the Seagull's tendency for softness at the frame edges, but I was admittedly missing the TLR shooting experience.

1 - f/5.6 1/300 - Okay, I now know not to trust the Seagull with the position of the START band on this type of film, as this exposure didn't even make it onto the film itself, but the backing paper in advance of the film. I don't even recall of what I took a photo. 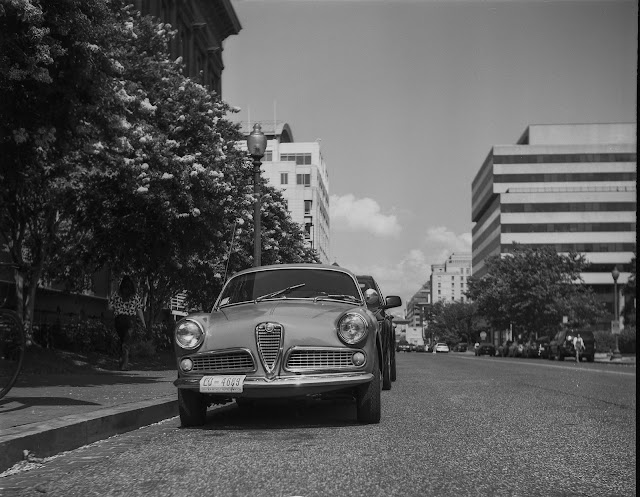 2 - Washington, DC - f/5.6 1/300 - When I saw even just the negative for this first shot, I was amazed at the lack of grain and sharpness.  I'm just as impressed after scanning.  This Rollei film is off to a great start!

I had certainly enjoyed the experiences of creating images of a more panoramic nature by adapting 12o film to cameras using obsolete film formats.  I dove into this realm by first using 120 film in a 116 format camera, and later followed it up by shooting a few rolls through an ancient 122 format camera.  The results from the latter, while encouraging, also gave me some room for improvement.  If I was really going to get some favorable results from this camera, it seemed imperative that I shoot at f/16 or greater.  Since shooting stopped down so far in all lighting situations would be tough using slower films such as Velvia 50, it seemed only practical to use a faster speed film.  However, I'd been underwhelmed at the color rendition of this camera on negative film, and wanted to use slide film to test this theory.  This resulted in me having to use one of just two rolls I had left of a renowned but discontinued film: Fuji's Provia 400X.