Here and there, as I shoot some plates, I'll be supplementing them with the same scene shot on both film and digital to allow for an interesting comparison between the blue sensitive media of the plates, the panchromatic, ortho, or color media of the film, and one or more settings on a digital camera that may mimic or differ from that of the non-digital media.

Following are three takes of another scene in Baltimore, this time on a fascinating remnant of Linden Avenue, once a pretty vital arterial street that was almost entirely swallowed up to redevelopment beginning in the mid-1950's.  The 1700 block has managed to survive, complete with streetcar tracks that have been dormant since 1955.  Since the block is punctuated with an island in the middle, the east side of the street acts as auto parking, and the streetcar track remnants abruptly end, the vintage photo possibilities are somewhat limited in composition, but with careful cropping, an image of nostalgic nature is entirely possible with this scene.

As a wet snow began to fall, I stopped past this favorite haunt one Saturday afternoon with three cameras in tow.  Instead of using a "proper" plate camera for plates, I was using the Kodak Bantam f/4.5 that I'd inherited from my father, with a pre-seated J. Lane "35mm" size plate as a recording medium.  Supplementing this was my newly rediscovered Yashica Electro 35MC stocked with Eastman Double-X film, and the Nikon J1 that I'd recently snapped up.  I fired off close focus shots of the scene using all three cameras, with the Bantam tripod mounted to accommodate the slow speed of the dry plates. 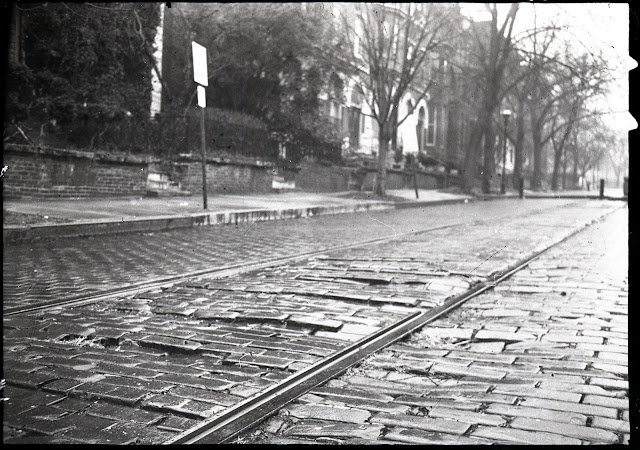 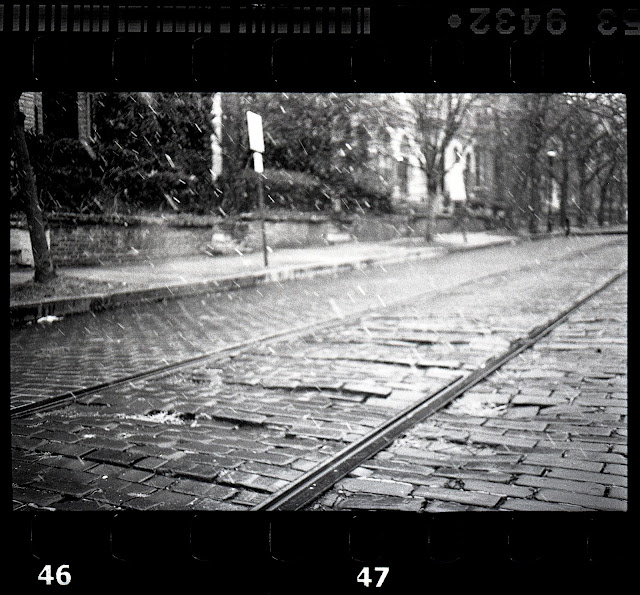 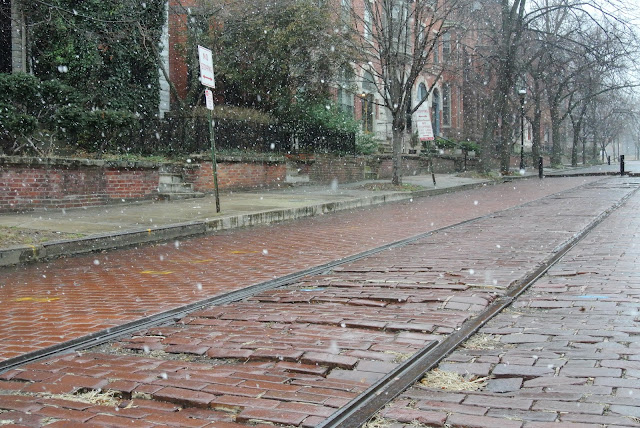 Looking at the three images, the first thing that is evident to me is that the presence of color actually detracts a bit compared to the black and white images.  I can also see where the shots taken on the J1 and Bantam are identical in composition, but the Yashica is shifted a bit.  As much as I like the result on the plate, I actually admit to liking the Yashica's rendering on the Double-X film the most of all.  Unlike the other two photos where it can be seen that the trolley tracks are punctuated by the mid-block "island," the tracks in the film version actually seem to blend or vanish into the backdrop.  The shutter speed of this version seems to perfectly show the frenetic falling of the snow, unlike the other versions where the snowfall either disappears or appears placid and calming.  The extra snap of contrast in the Yashica version just ices the cake for me, combined with the most significant fall off in focus in the distant elements.

So in this case, the film version takes the gold, the plate takes silver, and the digital version again gets bronze.