Film Hacking: Not Your Typical Polaroid

A number of months ago, I snapped a photo on Fuji FP-100C Instant Peel Apart Film, and was particularly pleased with the results that I obtained. 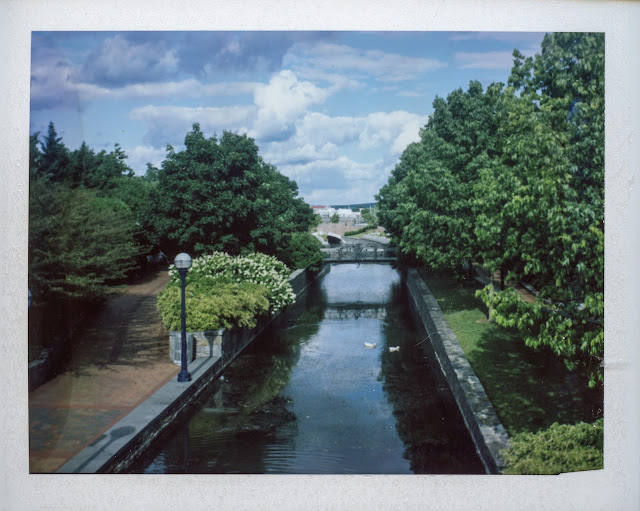 Would you care to guess which camera model shot the photo?

Might it be the Polaroid 100?  The original article, that I have recently acquired?

Perhaps it is the Polaroid 360, a well equipped model complete with Zeiss finder, that I've also recently picked up?

There's also the possibility of the responsible camera being the 440 model, that I recently was less than elated with.

It could also be the Colorpack II model, the first peel apart Polaroid model I tried, which became an unexpected favorite to me.

Or might I have found a way to finally adapt my otherwise obsolete J66 model that uses roll film to be able to use pack film instead?

Well, none of these answers are correct, though the last one is the closest to being correct. Here is the camera that shot the above photo... 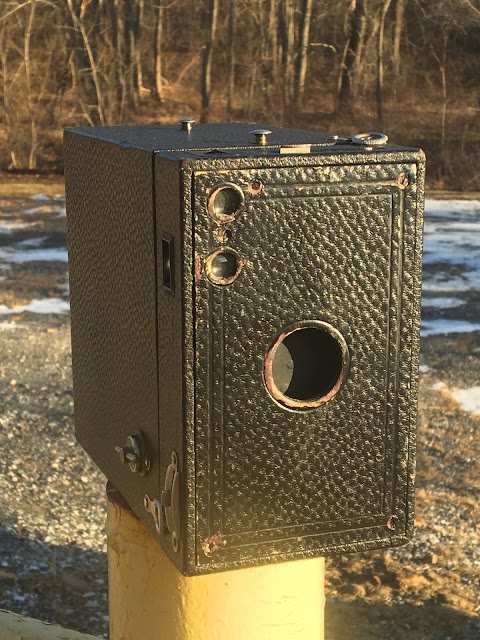 But then there was the matter of film, which had been discontinued in 1961.  Typically I'd do as I'd done on some other cameras using discontinued film formats, and either find a roll of the film on ebay and after first use, recycle the backing paper with 120 film stock taped on.

However, the 130 format film that I was spotting wasn't exactly cheap.  It was actually costlier than the camera itself, so I improvised and taped a pair of 120 backing papers together to create a 2 7/8" wide backing with handwritten numbers.  This was something that worked only so well given the challenges of keeping the papers parallel and slack free.  I then took a roll of Orwo NP15 in 120 format and taped it upon this impromptu backing paper, and tried some test shots.

A pair of shots of 120 Orwo NP-15 film placed onto a homemade 130 backing showed me not only that this film had encountered a hard life before I got it, but also that the Kodak 2C Brownie is a decent camera!

The results were dreary (and certainly aged in appearance) to say the least, but this was more due to the extreme fogging present in the 1980's Orwo film stock.  Looking at the details of the photos that I could make out, I was actually pretty impressed with the details evident from the simple lens.   I certainly wanted to try this camera again, but before grafting another roll of 120 stock onto my homemade 130 backing, my curiosity got the best of me.

I had previously loaded up the aforementioned Polaroid 360 with a fresh pack of Fuji FP-100C, and upon taking the first shot, experienced a jam in the camera that simply would not clear.  Apparently this is a common issue due to the pressure of this camera's electronic timer mechanism.  The issue typically occurs with the first 2 or 3 shots in a pack before clearing up.  As I cleared the jammed exposure from the film pack in the dark, a light bulb went off.  Fortunately that light bulb was in my head so it did not fog the film.

Taking the jammed exposure and examining it, I was able to see that with a bit of maneuvering, it fit PERFECTLY in the film area of the Kodak 2C.  Since I wanted to clear a few more exposures from the FP-100C film pack to be able to use it readily in the Polaroid 360, I elected to pull another shot from the pack and carefully lay it with the negative facing the lens of the 2C.  I then lightly placed a cut piece of black card stock over the whole arrangement (to both block light from the red window on the back of the camera and to help keep the film negative flat. I then reassembled the camera.  All of this was done IN DARKNESS. 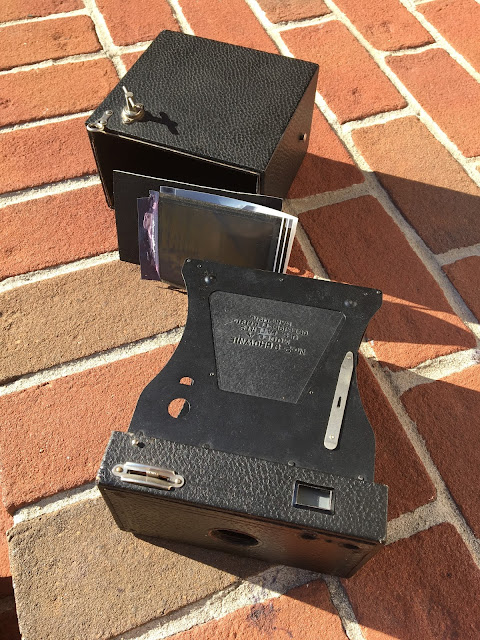 A cross section of how one shoots a piece of pack film in a Kodak 2C Brownie.  The camera's dimensions fit perfectly around the carefully folded piece of unexposed pack film, negative facing toward the lens.

With the lights now able to be turned on, I headed out and found a sunny scene to test my experiment,.  Following the exposure, I came home and went back to my dark room.  With the lights out, I carefully disassembled the camera and removed the film, taking care to then realign the packet so that the exposed negative could be pulled through my Colorpack II camera and transfer the image from the negative to the paper.

The results are what you see at the top of the page.  I was elated with the results, being a vast improvement from my ill fated first roll from the Orwo film.  I actually found myself dipping into the film pack a few more times to recreate this experiment, some samples of which are seen below.  While I hit a few technical stumbles on the way, particularly with getting good film pulls through the spreader bars of the Colorpack camera, I was still quite pleased with what was coming forth through the lens of the old Kodak Brownie 2C. 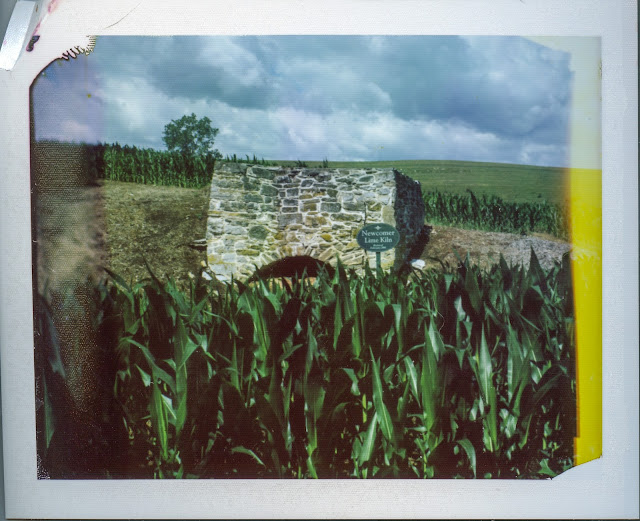 One challenge of going out for a drive in new territory with one sheet of film in your camera that you can't swap out until returning home is finding the ideal chance to use it. A trip west through Boonsboro revealed this old lime kiln that seemed as good a photo op as any.  Note the crimp in the paper at left top indicating an issue with the pull, as well as a blur and light leak on either side of the center. 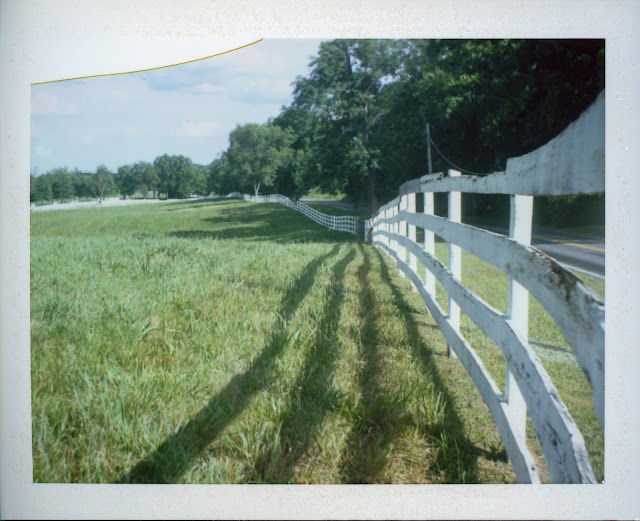 Exposure controls on the Brownie 2C are pretty basic, but are there, but you must remember to use them!  On a separate day from the photo above, I drove for a while and finally elected to snap this farm scene, hastily stopping on the shoulder and hustling up a hill for the quick snap, only to realize AFTER I fired the shutter that I hadn't used the aperture setting I wanted on this bright day.  Despite some over exposure, the result still looks nice!

Just as 130 film vanished over 50 years, time is running scarce to use fresh FP-100C in a Kodak 2C, given its discontinuance by Fuji.  And while this sort of experimentation isn't for everyone, for the film hackers out there like myself who enjoy getting recorded images from long dormant lenses, this little improvisation works amazingly well for the time being. And what to do for the longer term?!?  Well there is always Instax Wide! 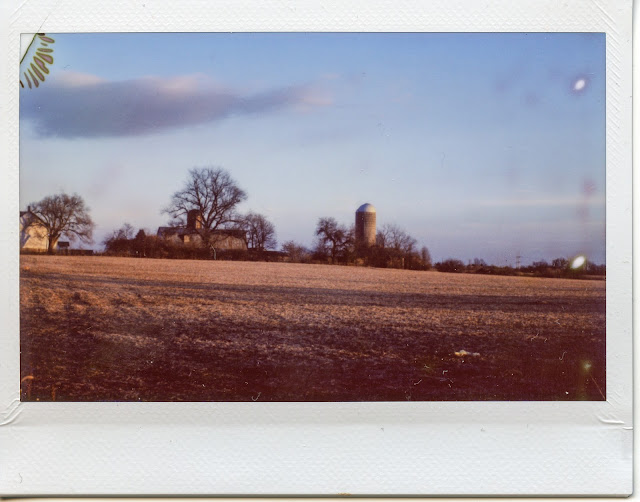 A pair of exposures in the Kodak Brownie 2C using Instax Wide film.  Using polarizing filters and the diaphragm to tame the Instax film speed, I was able to get some promising results that got my curious mind wandering again.  In the shot below, I used the "Close Up Lens #1" over the lens of the Brownie, just as I did with 120 film a few weeks ago, to create a close focused image through the box camera. 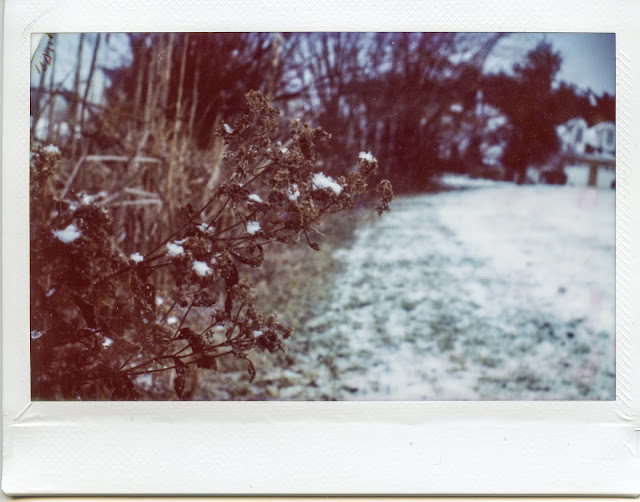 This experiment served to me as a really great example of a win-win.  Not only was I able to bring new life into this 130 film format camera to see that it was capable of quite a lot more than anyone might expect, but it also opened my eyes into doing more experimental things with different instant film media, eventually resulting in my own fun little breakthrough only days later that will be shared shortly!  Stay tuned!