There's just no other way of putting it.  One would think that after several less than successful tries of trying to use Fuji FP-100C pack film in a handsome but otherwise obsolete Polaroid J66 camera, I'd simply toss in the towel and be content to hand this camera over to my wife to strictly be a display item for the house.

"Not I" said the rabbit.

If nothing else, my increasingly frustrating experiments with this forlorn folder proved one thing: that film placed into its chambers was exposed in proper focus.  The main issue with the pack film was the film speed combined with an apparent reciprocity failure that left repeated exposures of the same scene to have little effect on the exposure.  After 14 repeated exposures of a sunny scene that still came out dark, it was apparent that 100 speed film was ill fitted for a camera whose design called for the use of 3000 speed film.

It was this thought that dawned upon me one bitter morning as I began to embark on a few different "Instaxperiments" as I like to call them. I'd managed to make Instax Wide film work properly in a Kodak Brownie 2C, but had to do some work to throttle down the higher speed Instax film.  As I had a decent supply of this medium, I figured I'd give the J66 one last try, and carefully placed a single sheet of Instax wide (puffy side to the front) into the film chamber under the veil of darkness.

With bright sunny skies in seeming contrast to the frigid temps, I set out on an errand, and in the midst of it, made a quick stop Downtown to attempt this last ditch effort to salvage a decent image from the J66.  I set the focus to the "portrait" setting, found a close subject well bathed in sunlight, opened the aperture fully by using the lighten-darken dial fully to lighten, and fired away.  Scurrying home and returning to my fully darkened room, I then removed the film from the camera and gently fit it into an empty Instax film cartridge, inserting it into an Instax 210 camera I picked up a while back with a faulty lens but working film ejector, and fired away to see how the J66 fared.

Expecting little after all of the previous trials and tribulations with this camera, I approached this last ditch try with almost no fanfare or anticipation, so I was pretty much speechless to see this image develop before my eyes! 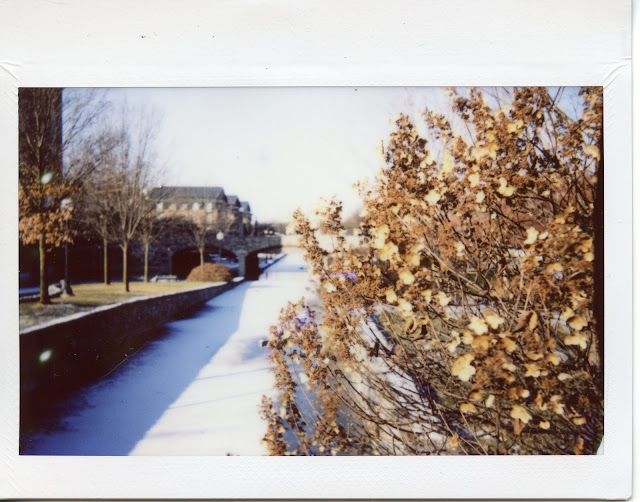 My first try at using Instax Wide in the Polaroid J66 was actually a last ditch try to see if I could salvage an image from this camera.  I was in utter shock to see this develop before my eyes.


It would appear I had managed to find the perfect medium for the J66.  While all of my previous tries with the 100 speed FP-100C had resulted in varying severity of underexposure, the Instax Wide film actually had the slightest bit of overexposure!  The results were remarkably pleasing, and shooting of this camera "wide open" under full sun managed to give some unexpectedly nice separation of foreground subject and blurred backdrop.  There was certainly some room for improvement but this was a far better first try than that using the pack film. 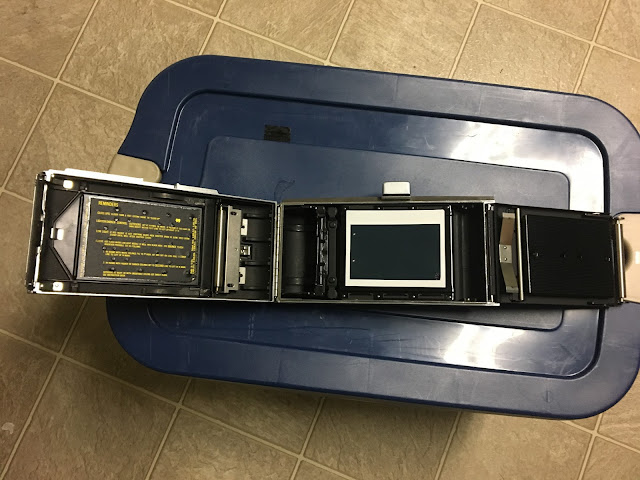 As seen above, the unfolded J66 not only dwarfs the shot of Instax Wide film it holds, but also the storage container upon which it sat to snap this illustrative photo.  Ideally, the film should be upside down with the "print" side facing away from the lens.  After some trial and error, I discovered that I actually needed to stop the lens down (turning the dial towards darken) a bit in bright sun, so that the aperture opening looked like the photo below. 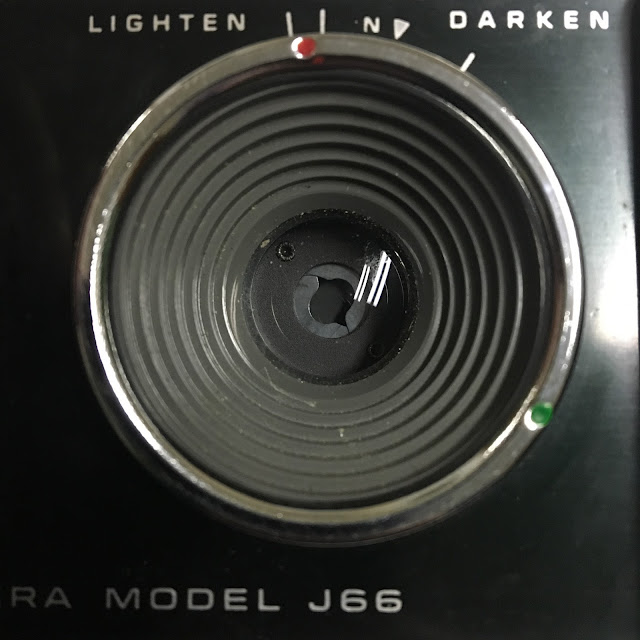 Within a few weeks, I had slipped another sheet of Instax Wide film into the J66, and included it on a photo trek to Antietam National Battlefield.  With cloud cover increasing, I was barely able to fire off an exposure under only slightly muted sun, again electing to try to nail the focus of the "portrait" setting.  And nail it I did.  The cannon wheels in this image are amazingly well defined, showing the grain of the wood as well as the painting marks, while the distant backdrop is very nicely blurred.  Again, a slight hint of overexposure is evident, but nothing that can't be toned down a bit with a little bit of post-processing.  What shows below is the raw scan of the print. 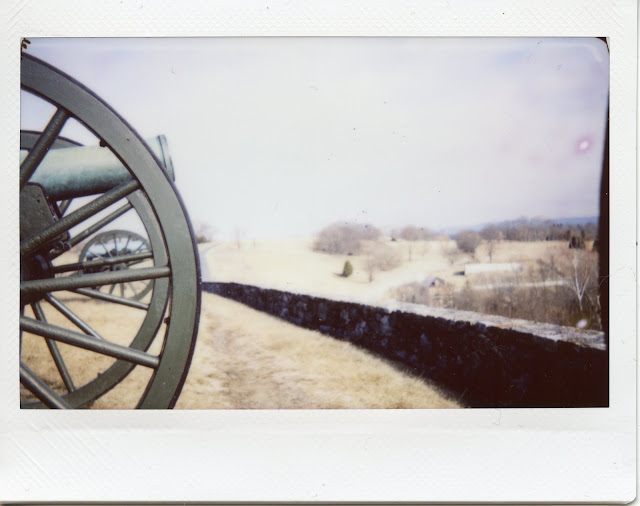 Approached with a tad more confidence, I was able to begin to actually enjoy using the J66, and fired off this image of cannons at Antietam with the countryside behind nicely blurring in the distance.   Initially I had only hoped to get an acceptable image from this camera, but I was actually using it with the idea of getting good results.

Finally, I elected to give the rather expensive medium of "Instax Wide Monochrome" a trial whirl in the J66 given my first two good tries.  With the lessons I'd learned to create some best practices, and with a bright sun overhead, I actually stopped down the lens a little bit to something right around the aperture shown above, and fired away, again with the distance set to "portrait."  On returning home, the J66 delivered me a photo EXACTLY how I'd hoped, and further confirming that this is a camera that I can get decent and consistent results from as long as I stick to a bit of a script. 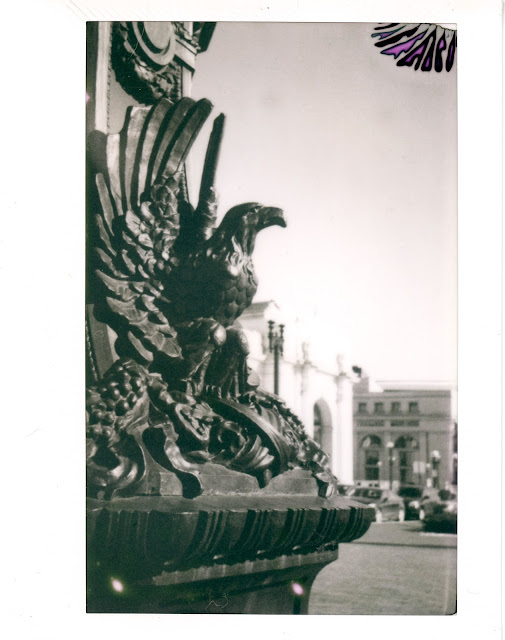 My most recent image from the J66 was this one using the new Instax Wide Monochrome Film.  Though I wish the film had a tad more snap in it, I am quite pleased with how the J66 handled this scene.  The magenta "design" at the one corner is a side effect of how my worn Instax 210 "processor camera" performs.

All told, the preceding experiment is approached largely as a novelty, though it carries with it a far more profound feeling of satisfaction than simply loading a common 35mm SLR with readily available film and firing away on Program or Aperture priority, due in large part to the degree of involvement that this requires, in carefully extracting and positioning the "sheet" of film in the camera, taking the shot (using some trial and error to get a feel for the settings), and then carefully redepositing the exposed film into the Instax cartridge for development.

As well, the feeling of being able to record an image, and a decent one at that, through the lens of a camera that has laid dormant for decades carries with it a unique air of satisfaction as well.  And while not quite "instant" in the nature in which it was intended, the ability to do this on a one-shot basis without the need to invest the costs for an entire roll of film and developing is actually a nice bonus.

And interestingly, I'd expected that even if my first try of Instax Wide film in the J66 were successful, I'd have claimed victory in my pursuit of a decent image from its lens and resigned it to the shelf as an example of a working but impractical camera.  But as can be seen here, I've actually chosen to lug this lumbering beast of a camera back out at least a few more times, and actually enjoy the experience of taking a photo through it.

Even with the fast 800 speed Instax film, the J66 seems very much a fair weather friend, seeming to work best in "cloudy-bright" conditions to "full sun."  I've yet to attempt a multiple exposure flurry similar to those I tried with FP100C under less optimal lighting conditions, or even an attempt at a truly deliberate traditional multiple exposure, but there's time for all that.  For now though, the J66 has gone from "Near Zero to Hero" in my book.
at 08:00