Not too long ago, I featured a post spotlighting my use of an 828 Bantam camera, for which film hasn't been commercially available for 30 years, with the exception of respooled rolls of Tri-X using 35mm stock that is distributed by Film for Classics for sale at some film retailers.

But let's say you have a Kodak Bantam or other similar 828 format camera and want to use a stock other than Tri-X, or you want to use the format as it was originally intended, in 28x40mm fashion without sprocket holes being evident. Or perhaps you would just like to save money!

The good news is that any film that is available in 120 format can be used in your 828 camera.  It involves a little bit of effort, but it can be done reasonably cheaply and without a lot for much in the way of specialized tool setups.  Even better, if you follow all the steps shown below, you will actually get the equivalent of TWO rolls of 828 film every time you do this, as the resulting roll of film will readily take 16 exposures, rather than the native 8 of the original format!

Here's what you will need to get started: 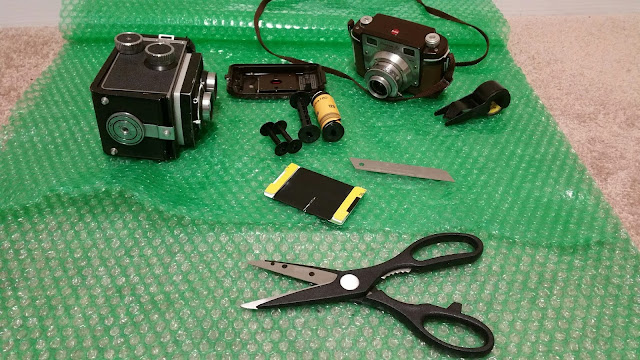 The only fabrication required is the creation of a guide that will be a low tech contraption that both holds the utility knife in place for cutting of the film at the proper location as well as feeding the film through parallel to the blade.  To guide the film, I cut a few slide mounts (using newer ones with rounded edges) and glued them to the card exactly 66mm apart to avoid any play in the film's path as it travels through.  I then cut a slit in the card so that the blade could be seated in this slit, 36mm from one far edge, and 30mm from the closer edge. I covered the resulting pathway in electrical tape to try to reduce static as the film passed through. 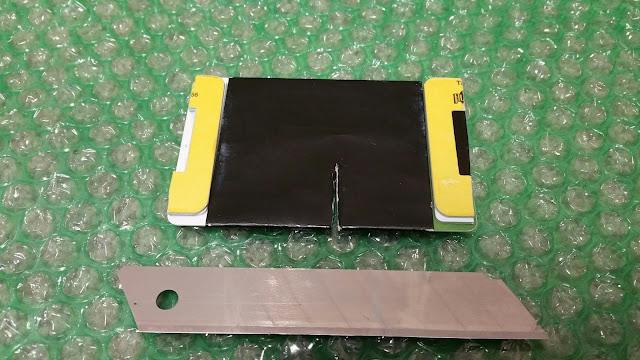 This shows the simple contraption that results, with the guide resting on the back of the opened camera, and the blade positioned perpendicularly and facing the supply side to create an even shear as it meets the approaching film.  Positioning the guide in the proper orientation (with the wider section of film cut on the right side in the direction of travel) will result in a roll of film that allows you to use the 120 film's backing paper numbers for 645 format to easily wind the 828 film from one exposure to the next. 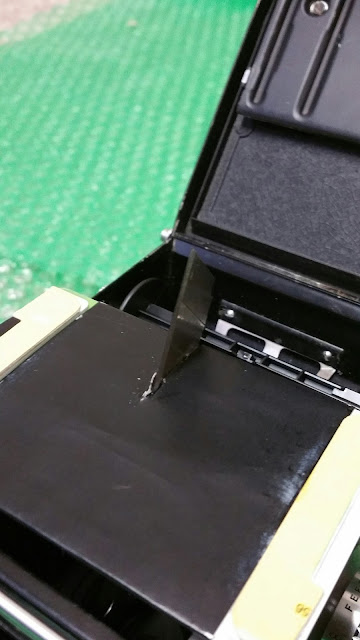 It's almost showtime, but there is just a little more to do.  Open your 120 film and connect the leader to the take up spool, then put both spools in the camera with the door open, leaving an ample amount of slack to carefully work around the blade, then gradually tighten the slack, using the point of the utility blade to carefully pierce the backing paper to where it will properly seat in the guide, when all the slack is taken out. 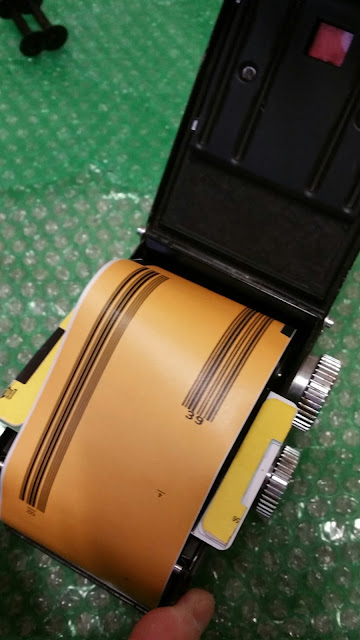 Pull out enough slack in the supply roll to be able to go around the cutting contraption, 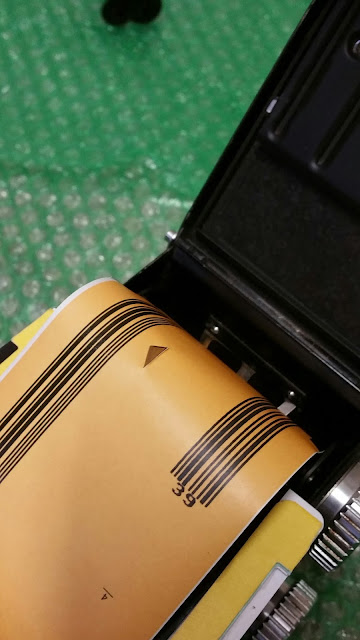 Slowly wind the film until the blade pierces the paper. 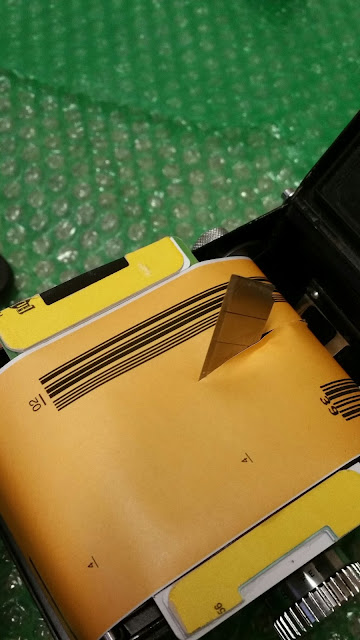 Then wind the film until all the slack is taken up, and the paper sits securely between the guides.  You're lined up.  It's time to cut some film!

IT'S TIME TO TURN THE LIGHTS OUT! Unless of course you are using a changing bag, through I really don't know if working in the confines of a changing bag with a sharp blade is a really smart idea.

Begin winding your roll through the OPEN camera, using caution and care to feel that the paper is still properly seated securely between the guides.  As you crank, you will soon be cutting both film and paper to the correct width.  If your blade is sharp, you very well won't know just when you are suddenly cutting the film.  Wind the film completely through the open camera. 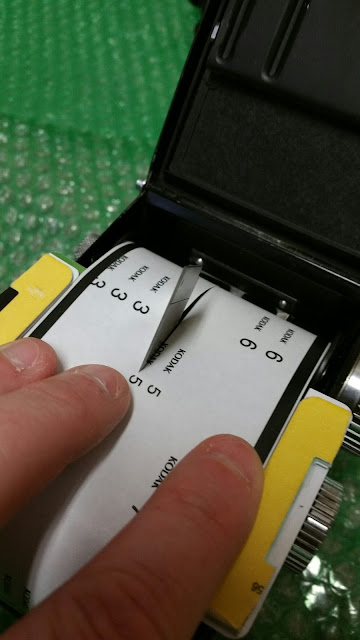 In the dark, you will be carefully holding the film against the guide as you wind it through with the other hand.  Use particular caution around the utility knife blade. 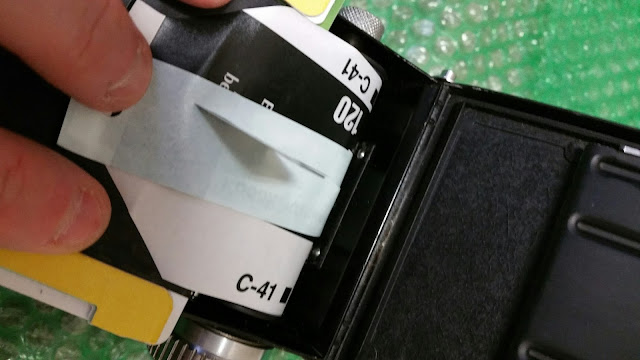 Even as you feel the film trail off and the resistance get lighter, continue to wind all the way through to the end, including any attached tabs.  Trust me, this makes it easier to discard the unused portion of film.

On your take up spool, you will now have a slit roll of 120 film.  The smaller section will be discarded (unless you are really resourceful and want to use this segment for a miniature film format camera) and the wider section will form the basis of your 828 film roll. Carefully use the end of the paper to ease the entire split roll of film from the take up chamber of the camera, and make sure to hold the portion you plan to keep snugly against the roll.  Begin to peel away the discarded part of the film to leave only the usable portion of the film on the 120 roll. 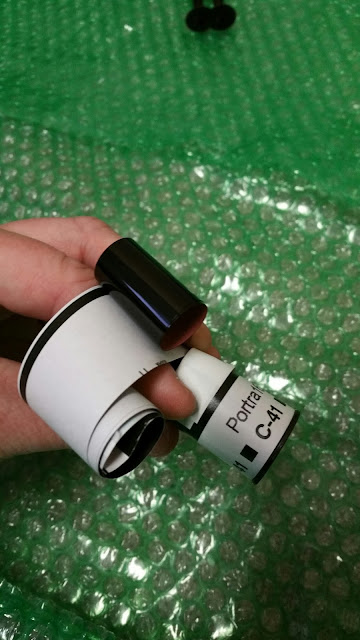 Above, I am holding what will be my 828 roll of film on the spool as I uncurl the discard.  Eventually you come to the start of your cut again, and you will have to tear the remaining paper downward, leaving some on the spool.  No worries, as this gets discarded later anyway. 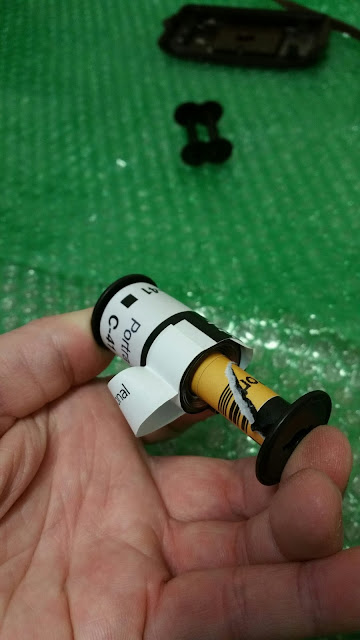 Now it's time to start really forming your 828 roll of film.  Begin unrolling the usable part of the spool until you detect actual film rather than paper.  This will be the end of your actual film, but you will need some backing paper in addition to this.  Cut the paper backing about 6" beyond the end of the film, about the length of your fingers extended from your thumb, as seen below. 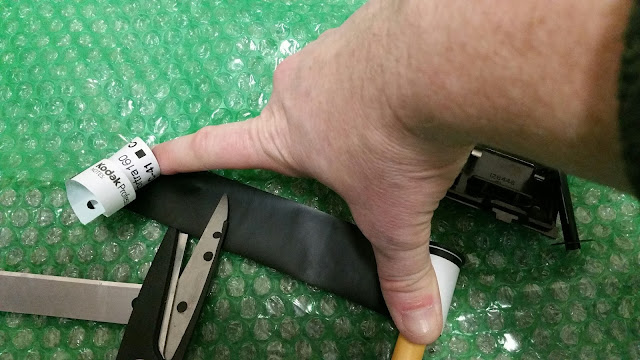 Now, it is time to grab a piece of electrical tape, and secure the backing paper to one of the 828 spools.  This will wind up being the supply spool for the film.  Getting this started can be the trickiest part of the process, but just take your time.  Guide the backing paper so that it sits between the two flanges on the 828 spindle, and carefully tape it to both the spindle as well as itself.  If it makes it easier, you may want to consider putting the tape on the spool at the onset. 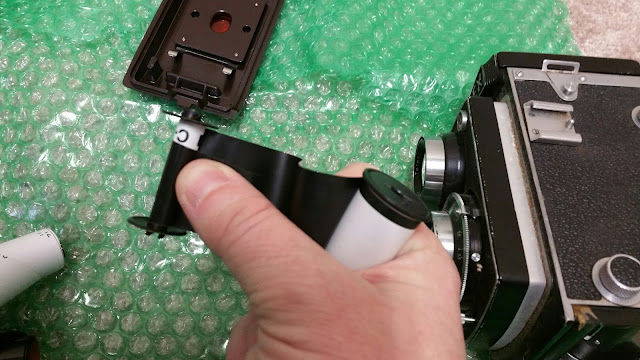 Now comes the actual hand rolling.  Slowly begin to feed the film from the 120 spool to the 828 spool.  After a few turns, you may feel the film.  Be careful to ensure that the film is staying inside the paper as you wind it so as to avoid fingerprints.  I tend to find the winding process easier if I keep the film on the 120 spool tightly secured.  And given that I am using twice the number of shots as the typical 828 roll of film, it is imperative to wind the film on the 828 spool TIGHTLY! You may notice some difference in the slack between the paper and film.  Don't worry; when you get to the last of the film, you can always peel off the tape that secures the film and paper, and reattach it to remove the disparity in slack. 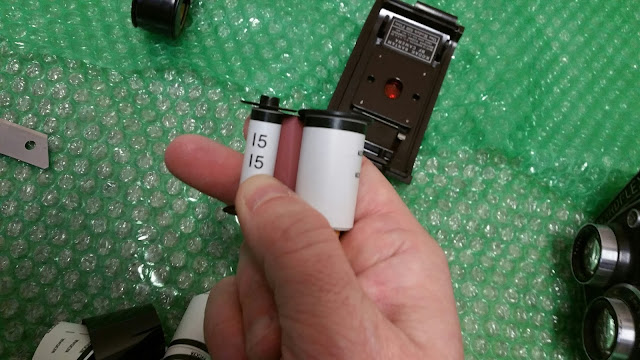 Once you have reached the end (or what will wind up to be the start) of the film, you will cut about a 6" leader of backing paper that will attach to the 828 take up spool in the camera, as seen here. 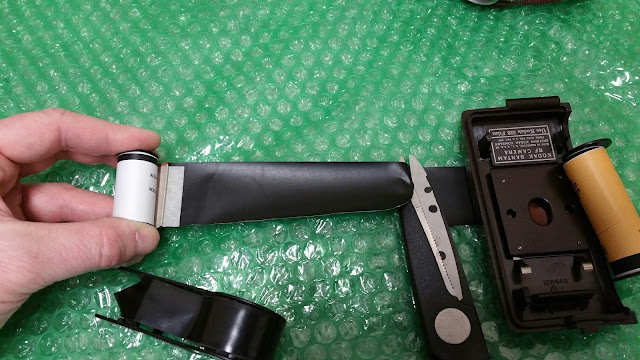 Voila! You have just created a super length roll of 828 film! Depending on the type of film stock used, your roll may barely be contained by the spool flanges, or it may be a little bit chubbier.  As such, it is not recommended to have this roll out in plain light so as to avoid light leaks onto your handiwork.  If you want to turn the lights on to reorient you, slip the roll into an opaque BLACK film canister, or at least hold it tightly in your fist in a pants pocket. 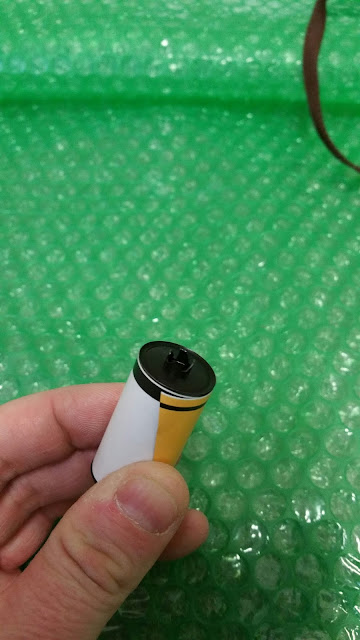 Let's get this roll into the camera! With the lights out, start by putting the supply roll into the film chamber, and slowly pulling it outward, with the backing paper facing you. 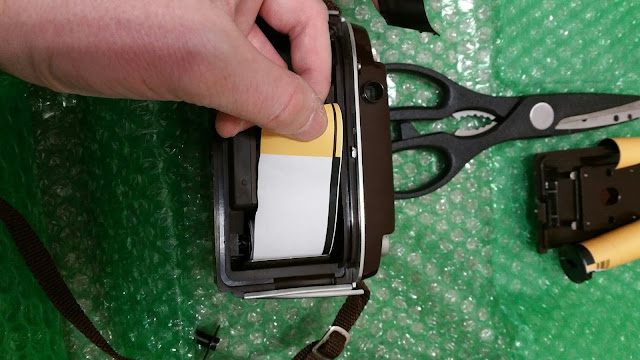 Make sure you have your other 828 spool as well as another piece of electrical tape handy.  Secure the paper to the spool and move to place the spool into the take up end of the camera. 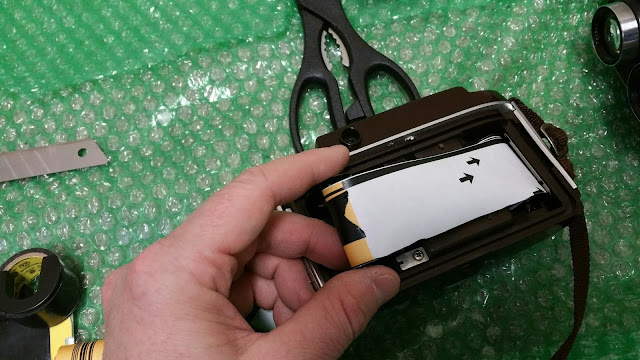 Once both spools are in place, turn the take up knob slowly and feel to ensure that the paper is being taken up by the supply spool, as well as to take up some of the slack.  Many 828 cameras have a catch in the take up spool that will require a button to be depressed as the film is wound.  On this model, it's the little silver latch near the viewfinder. 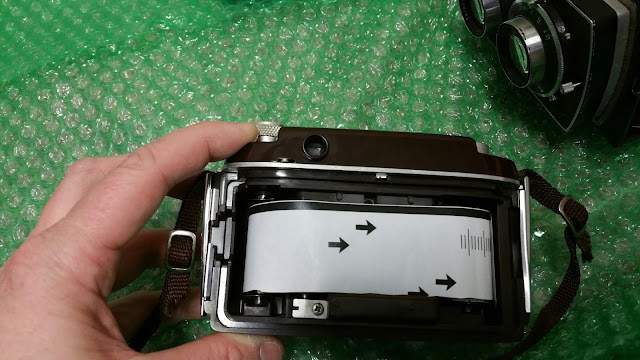 It is now time to close the camera, and once you do, you can turn the lights on again!  Now, wind the film, looking at the rear window until you see frame #1.  The numbers for 645 are all set to align with the 828 window, albeit in the upper part of this window. 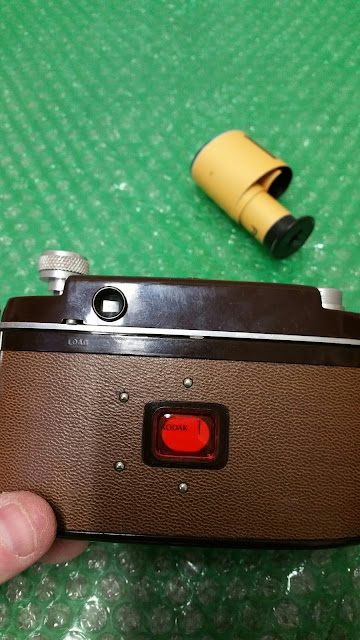 Here is the real fun: taking photos on a hand rolled film that you created! Enjoy the fun of shooting your 828 camera!

But wait, there are a few things to be mindful of as you near the end of the roll.  If you used a thicker film base, you may experience more winding resistance around frame #14.  Don't panic, just don't force the camera, and you should make it to frame #16.  Conversely, you may experience no resistance at all through frame #16.  In either case, once you hit frame #16 and take your last shot, it's a good idea to just stop winding the film forward, and when you are ready to unload the film, head back to your completely dark room. 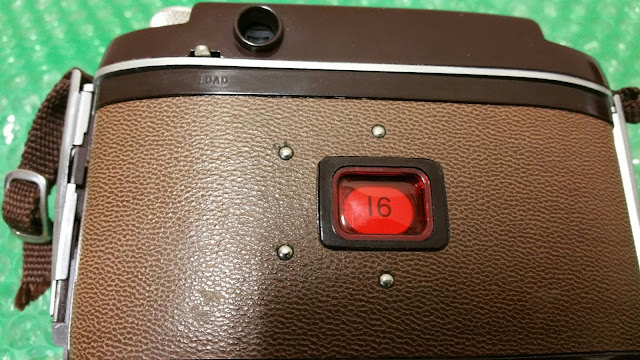 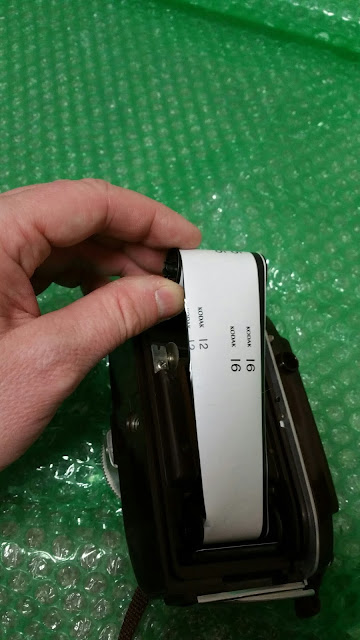 Place the exposed film into an opaque black film canister, and secure the lid on top. 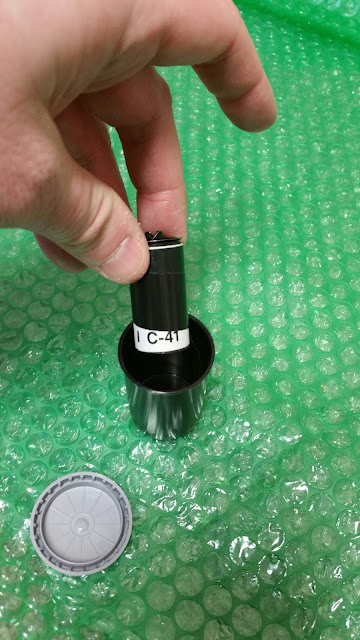 Hooray, your 828 roll of film has been exposed and is now ready for processing! If you are sending it off, affix a note asking the technician to open the canister only in darkness, and denote what type of film you are enclosing and how you want to process it. 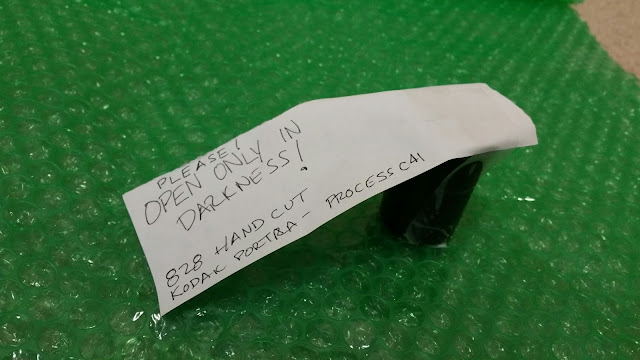 And where do you send a roll of 828 film to be processed?  Dwayne's photo will process 828, but this processing is in an automated tank designed for machine cut 35mm stock.  Despite your best efforts, you roll is likely to have a bit of variance in the cut edge, particularly in the first few turns after the location where the first bit of film is taped to the backing paper. Therefore, I would recommend a lab that does dip and dunk.  Two mail order labs that I have used with absolute success are:

While this process is obviously easier in the light than in the darkness, it gets easier with each time you do it.  I tend to think this method to be easier than trying to seam together 35mm film with an 828 or cut down 120 backing paper, but admit I haven't attempted this yet. Also, It may help to do a dry run in the light with a discard roll of film.

I had a little time to create a more rigid base for cutting 828 that fits right into the opening of the TLR.  And it will also allow me to do some resurrection on another discontinued format as well!  Stay tuned! 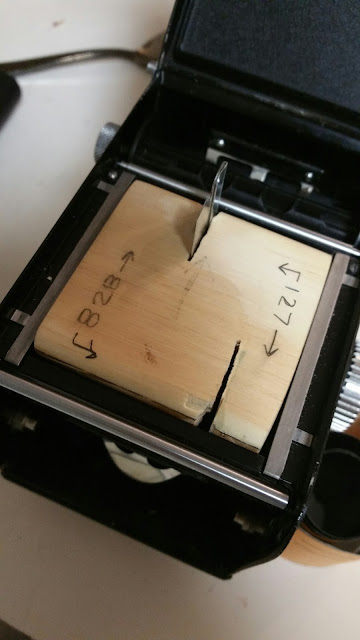