My love affair with my Autographic 1A had seemed to have plateaued.  Once envisioned as a cheap (only $7.19) camera that would enable me to shoot occasional "supersized" landscape photos on 120 film, my actual results, initially promising, were getting progressively worse, and after another set of washed out results in Film Fun Folio #19, I had begun to question whether I needed to simply relegate this elegant old camera to a shelf display.  Besides, if I wanted large transparencies, the smaller 1A paled in comparison to the 3A to provide such goodies.

But being the master of last chances that I am, I gave the venerable old Autographic one last grace period to prove to me that it could find value as an active member of my collection. This was helped no doubt by a lucky lowball bid that landed me a roll of long expired Verichrome Pan film in the 1A's native 116 film format.  And with this, I figured, it was time to do one more "Autographic Experiment"

Though I had heard of good results from using long expired Verichrome Pan, the truth was that results could still be hit and miss, largely in relation to how well the film had been stored.  This roll expired in the mid-1970's: not a "Spring Chicken" but not as ancient as some rolls that people were shooting with success.  I loaded up the Autographic and began to flesh out ideas for shooting subjects.  I was not about to simply fire off these 8 shots on just anything.  Rather, I would try to bias my subjects to those of a historical nature, and potentially see if this old film would give me some successful tries of "Nostalgraphy."

I had been discovering the wealth of Civil War era history near where I live, so it seemed this camera and film would eventually get an assignment to capture some battlefield sites.  For now though, with a loaded camera and an itchy shutter finger, I set my sights on a lady.  I had a lunch date, and her name was "Aggie."

The "Black Aggie" statue is the subject of a decades old legend involving a curse.  An unauthorized copy of a similar figure called "grief," this statue once adorned a cemetery plot in Druid Ridge Cemetery outside of my hometown of Baltimore, MD.  The origin of this supposed curse vary, and its effects include stories of women made infertile, a man losing his arm, and night time visitors reporting Aggie's deep set eyes glowing in the darkness.  The monument was removed from its site in 1967.

I had recently been reminded of this legend, and had just discovered that Aggie had been relocated to a courtyard just a 20 minute walk from my work.  So off I went to memorialize this legend on film, using a camera that wasn't much younger than the memorial itself. Unfortunately, the lighting in the courtyard on a lightly overcast day was pretty drab for the ISO 50 at which I was rating the film, so the nominal shutter speeds available of 1/25 and 1/50 were a stretch.  In addition, I'd neglected to bring a tripod this day, so I had to do some particular improvisation on the fly, letting my Olympus Pen digital double as a prop as I tried to frame Aggie in the dim "Brilliant Finder."  I fired off a pair of shots and expected to use the rest on some of the Civil War sites in Central Maryland in the coming weeks. 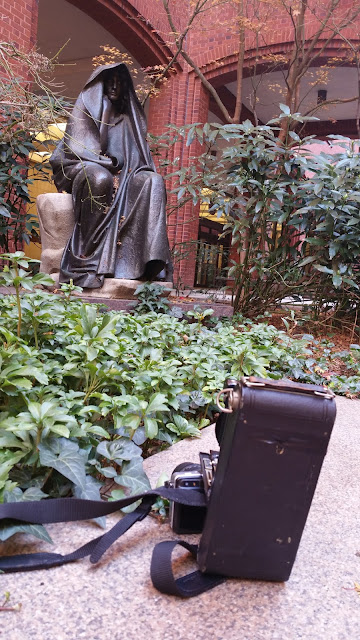 But after this, something went oddly wrong.  I pulled up to the Gambrill House on the Monocacy National Battlefield one afternoon in late December, tripod in one hand and 1A in the other.  But this camera, which had been essentially free of any mechanical issues previously, refused to unfold! The guide at the bottom of the lens board would simply not budge to work its way onto the rail of the flip out board, leaving the lens firmly back in the body.  After nearly 20 minutes of trying nearly everything to coerce the camera into unfolding (as well as a liberal amount of swearing), I resigned to walking away from the scene, with exposure #3 of the roll of Verichrome Pan still waiting for its chance to be properly exposed.

Could it be that my camera had gotten cursed by Black Aggie? I was beginning to believe in the legends!

At times in the next week or so, I would resume attempts to unfold the camera, now sitting in my home office.  Each time, these attempts would be met with the same futile result. Finally, as I neared my wits end with the matter, and even contemplated buying another 1A just so I could finish this experiment, I gave it one last try, defying common sense by pulling the lens board appreciably forward at the top as I pulled the entire board towards the front. Inexplicably, the guide slid right into the rail, and I once again had a functional Autographic camera.

Fortunately, the last 6 exposures of this roll of 116 film were shot without any further incident, consisting of some shots around Antietam National Battlefield as well as some others in Downtown Washington, DC.  I had hoped for more shots of the former, but a blisteringly cold day combined with the lack of safe access to pinpointed spots led me to shelve these ideas, particularly since framing in the measly viewfinder was so challenging. By late January, I now had a completed roll of 116 film ready for sending off.  Fortunately, Dwayne's Photo still offers 116 processing, so I could send this roll off at a modest cost, rather than having to go through a more specialized processing service. 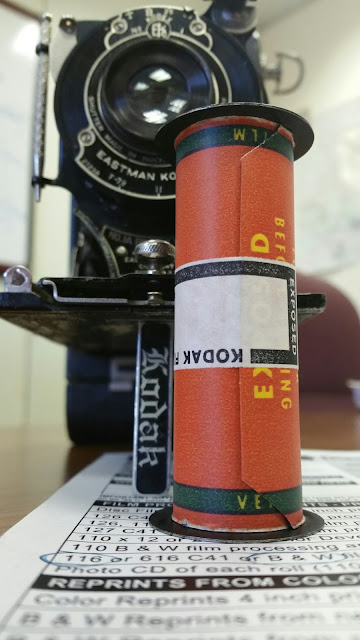 And despite spending money on the film as well as money on the processing and postage, I was approaching this from a perspective of "Hope for the best but expect the worst." The worry wart in me expected the film to be unusable, or the focus of the camera to have gone askew in my attempts to open the camera after the Aggie visit. Given the rarity of use of the long-discontinued 116 format in today's world, I didn't expect my results back in a hurry, but just a week after sending off the film, I got the shipment notification from Dwayne's.  The anticipation was hitting a fever pitch, and when the envelope arrived, I was admittedly surprised at its thickness. Could it be that I got results from every exposure?

The results were far better than my most optimistic expectations.  Not only did the camera and film yield negatives, but they were generally well exposed, decently composed, and showing proper focus! The tonality of the prints from this "stale" film was lovely, and complemented the historic subject nature of the images with nothing short of a stunning effect to me.  This crusty old Autographic and its long soured film had me astonished at what I was looking in the print envelope! 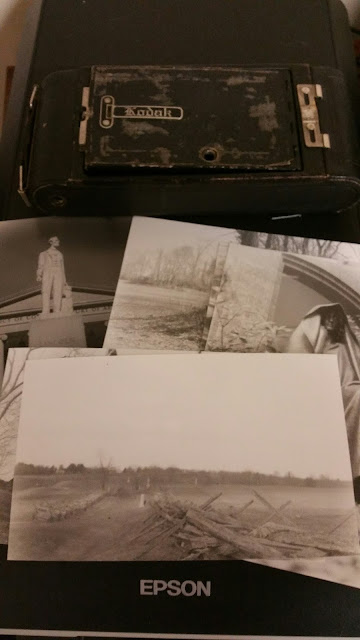 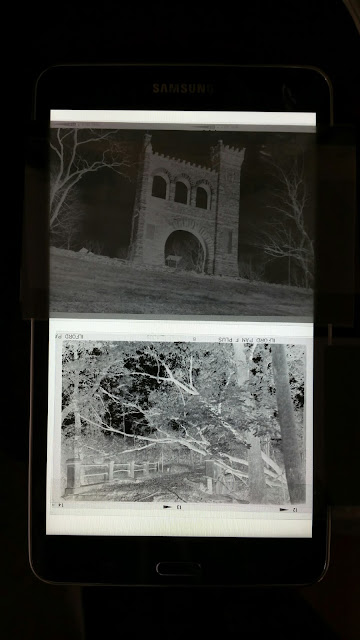 One interesting comparison can be seen in these photos, that show one of the returned 116 negatives, over a previously shot 6x9 120 negative.  The size of the 116 negative slightly exceeds the width of this tablet, while the 120 negative fits neatly.  Note also the amount of density in the Verichrome negative as compared the shot taken on contemporary negative. There is a significant amount of base fog in the 116 film, resulting in a tendency towards lighter toned images, as can be seen in the "negative view" below. 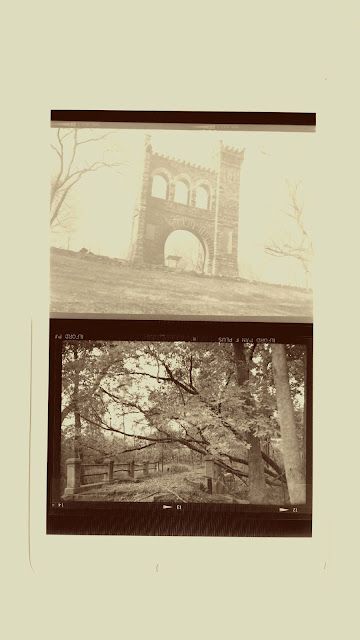 Exasperating viewfinder (and historic curse effects) aside, the experience of shooting the 1A on film specifically designed for it was quite a treat compared to my previous improvisations using 120 film. It was great to simply look in the viewing window to know how far to wind the film rather than guessing and counting turns of the advance wheel.  Similarly, at the conclusion of my shots, I could simply wind the film fully from the supply spool to the take up spool rather than opening the 1A in the dark to carefully back the 120 film onto its supply spool, only to forward wind the film an additional time through a true 120 camera.  These simple things helped make the photographic part of the process a lot less involved, leaving me more attention to focus on the aesthetics of the image rather than a work around.  And given the results, I honestly can't wait to give this another go with some more expired Verichrome Pan, and am actively scouting for more film to use in this camera.  I'm inspired! And the 1A has been salvaged as a shooter instead of a shelf queen! 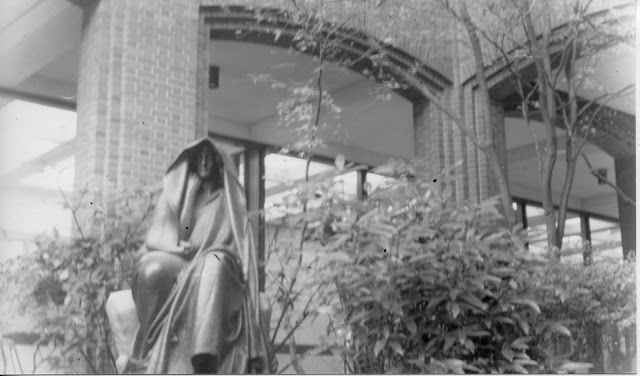 Seems like the first pancake of the batch never turns out, and this simply affirms that.  Bad framing and motion blur are the trademarks of this shot. 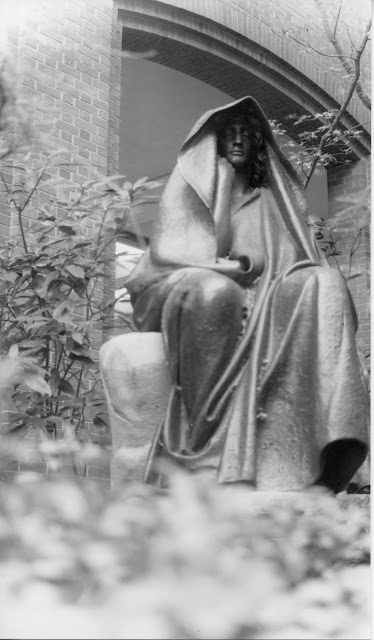 This is much improved by the second shot, the framing of which can be seen at the photo at top.  Focus is right where it should be on the Black Aggie monument, even if the odd setup picks up some distraction in the foreground. 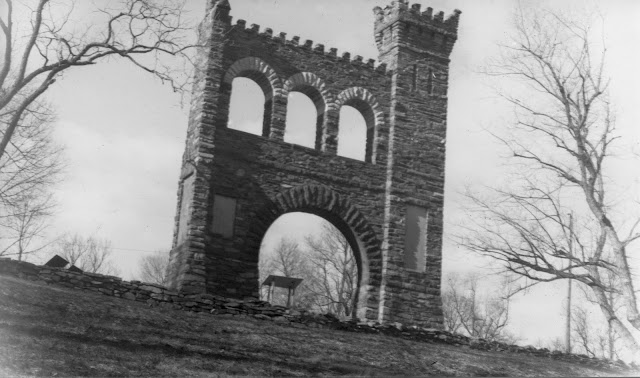 By the third shot at Gathland State Park, I'm seeing results that are pretty much exactly as I had hoped.  The aged Verichrome and the 1A combine to give a nice "light vignetting" at the corners, while overall feel of the photos in the harsh winter landscape make them look contemporary to the camera itself. 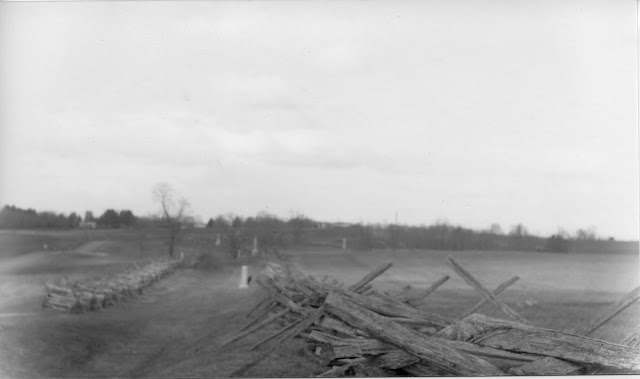 This one was jaw dropping for me, despite very little in the photo being in some semblance of focus. Taken along the "Bloody Road" in Antietam, the shallow depth of field leaving a blurry backdrop and dreamy effects of the expired film create a very evocative image for me that almost appears like it was taken in the 19th Century rather than the 21st.  I only wish that I had framed it more towards the ground to bring more of the in-focus fence timbers into the scene, but it was about 12 degrees outside. 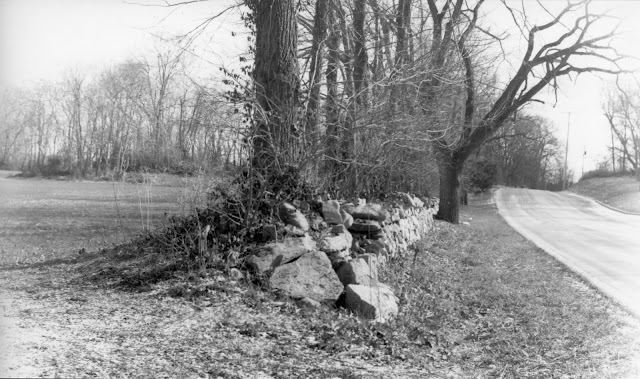 Lappans Road is graced for much of its distance by a number of small stone walls, as seen here.  The Autographic properly focused on this wall and the accompanying trees while muting the (albeit wide) road to remove all modern pavement markings, and appear as a road would appear in the early part of the 20th century. 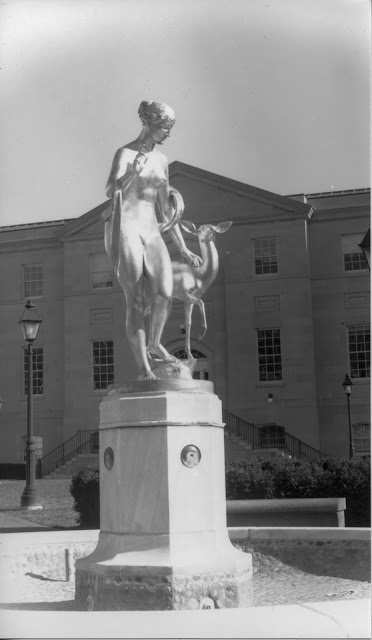 An image of a fountain in Washington DC came out sharply focused and pretty well composed on yet another bitter cold day.  Here, a smaller aperture was used, resulting in more depth of field. 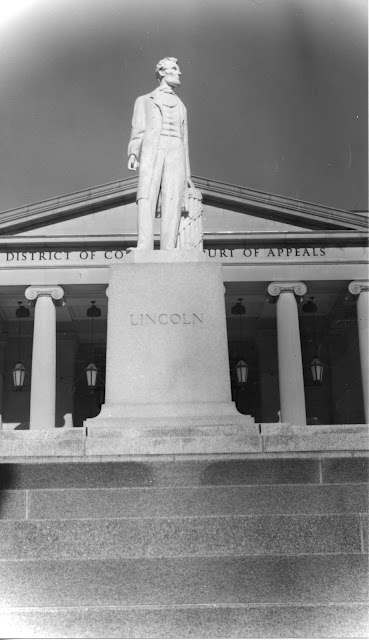 The vignetting begins to become more apparent as the roll nears its end.  Still, the tonality of the Verichrome Pan film remains very impressive.  It seems I am getting much more sure footed as to the framing of shots on the tiny and awkward finder, even if Lincoln is a bit crooked. 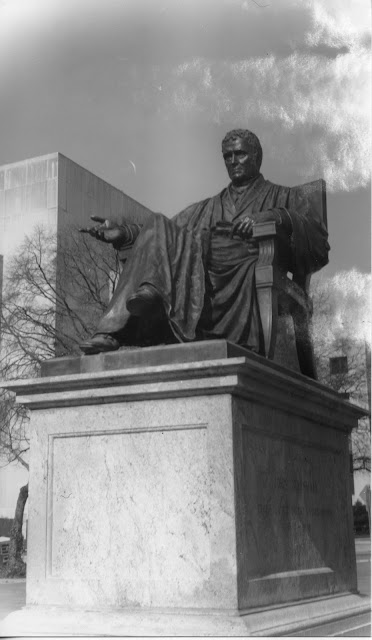 By the final shot, a dark stain appears on the negative's one side, resulting in an appearance of oddly shaped clouds on this image of a John Marshall memorial that were not there.  Aside from that, the image is well exposed, and seems quite well focused!
at 08:00