Trying to Get Instant Kicks: The Polaroid J66

Stubbornness is considered an inherited trait, and is one to which I can readily admit having. I show it at work and in my family life, but my stubbornness is pervasive enough to affect my hobby as well. Where most sane people in the hobby of film photography would not bother with trying to get an image from a piece of equipment that is functionally obsolete, I push forward with a "Can-Do" spirit that is admittedly a bit over the top at times...

To the point where I have to wonder when I should stop beating a dead horse.

The tale begins in the height of my Polaroid pack film enthusiasm.  Still psyched to have a new toy to play with in the form of the Colorpack II, while preparing to purchase yet another in the form of the Polaroid 440 from Strawberry Fields, I'm somewhat intrigued by the sight of another interesting Polaroid camera sitting before me pleading me to add it to my collection.  It's called the Polaroid J66. 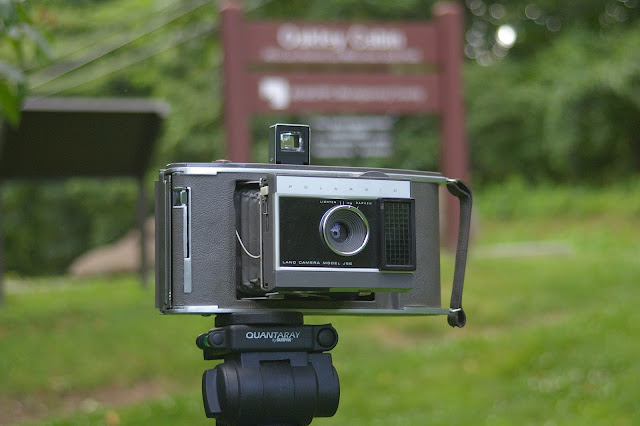 Knowing nothing whatsoever about this camera, with just 15 minutes on the meter outside, and my youngest son sitting on my neck as I sweat in the small store trying to keep him from breaking any of the multitude of interesting items, I take a quick look online, and without finding much in the way of information, elect to just simply toss it into my purchase for good measure.


It is only after I get home and do the proper Polaroid research that I should have done initially, that I discover that the the 1961 vintage J66 has long been a camera for which a suitable film has not been made.  Armed with a selenium meter and designed for 3000 speed film, with only a rather non-descript dial to adjust exposure, this model took Polaroid roll film Type 47, discontinued about 25 years ago.  I had a rather interesting looking white elephant on my hands, but one that seemed to at least be functional to some degree.

Ever the curious type, I thought it might be interesting to see what might be possible with this camera. I was able to find articles of converting this camera to use pack film, and another showing how 120 film could be adapted for use in Polaroid roll film cameras, but both possibilities involved a bit more legwork than I wanted to do with this basic camera.  I wondered if there was a way that I could "try" pack film in this camera on a one-off basis.

I wouldn't have to wait long to find out.  Only a few weeks had elapsed when I encountered a film jam in a pack film type camera.  My only recourse was to open the camera in the dark to dislodge the jam.  Once I figured out how the film sheets and their paper were interleaved into the film pack, I elected to sneak one out and see if I could carefully lay it inside of the J66 in the dark, so as to expose the film.  Developing it would then be a matter of reopening the J66 in the dark and properly pulling the whole arrangement though the spreader bars of my empty Color Pack.  It seemed like a low-risk, low-effort, and low-cost way to try to get a final hurrah from this camera that had likely taken its last photo at least 30 years ago.

In darkness, I laid the film into the camera with its bellows extended, and carefully closed it up, taking care not to close it back up for fear of fouling the film plane alignment when reopened.  With kids in tow, I set off on an errand, making a quick stop for a photo at the old Braddock Heights trolley station.  With clouds playing touch and go with the sunshine, I opened the basic aperture of the lens as far as it could go on a lightly overcast scene and fired away, and then hustled back home to see my results. The big trade-off to shooting this camera in this manner is that the "instant" part of the equation goes bye-bye.

Later, I headed back into the dark confines of the basement to extract the exposure, thread it through the Colorpack's spreader bars and see what I had before me... 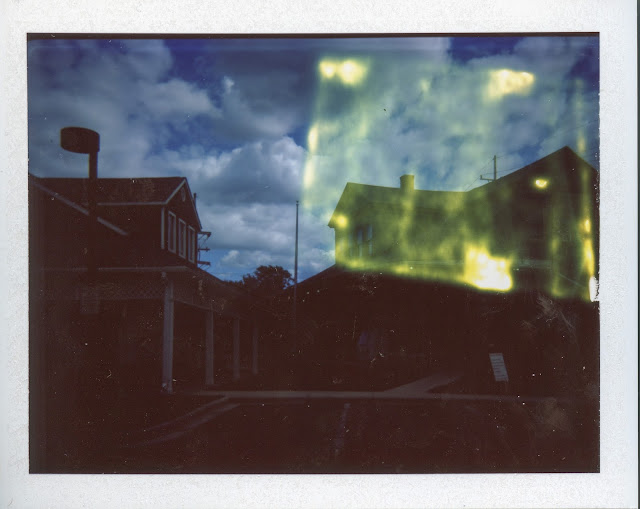 In a nutshell, I had a greatly underexposed photo, AND I made the huge mistake of leaving the numbered pull tab attached to the "packet" as I pulled it through, resulting in the yellow impression on the left side of the frame.  Despite all of these flaws, I felt as though I had accomplished a lot.  I was also surprised by seeing that I actually had a sharp image before me.  It appears as if my attempts to preserve the proper distance between lens and film plane were actually successful.

I could have stopped there, but why?  I had found this experiment fun and innovative, and had some lessons learned that would allow me to perfect my results.  As the same film pack of FP-100C wound down to its last exposures, I thought it would be far more fun and rewarding to get some results from the J66 using some tweaks.

My first thought was obviously to remove the small numbered pull tab to avoid the discoloration patch in the result, but given the decent color in the brightly lit sky on my first try, I figured I simply needed to wait for a very brightly lit day and try another exposure wide open to give this J66 a more fitting result.  A few days later, I got the chance to stop at a nearby pond that was streaming in vast amount of sunshine and confidently fired away to later get this result. 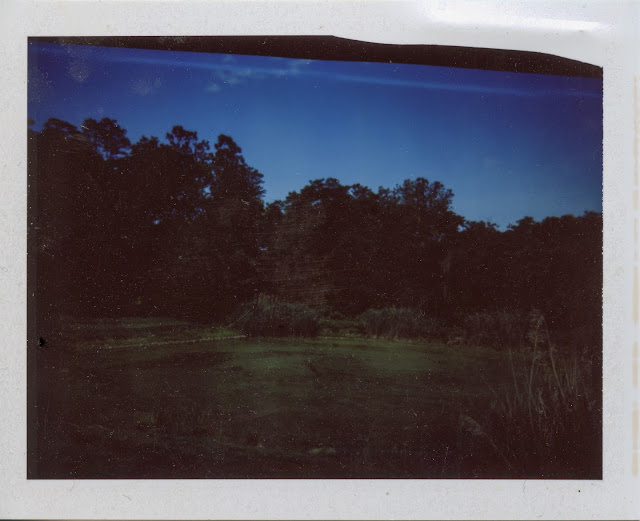 Yet again, this camera delivered very underexposed results.  Either the meter was shortening the shutter speed in the bright light, or there simply wasn't enough speed in the lens to record a suitable image in the brightest of light.  Greatly deterred, I retired to give this whole folly further consideration, before arriving at what seemed to be a epiphany of sorts.

With the piece of pack film in the Polaroid, I could make multiple exposures of the same scene as much as I wanted.  The J66 came conveniently equipped with a tripod socket, so the solution was to outsmart this camera, mount it upon a tripod, and take a number of shots (likely 4) of the same scene repeatedly.  It seemed I had the found the secret formula to successfully yielding a decent image from the J66.

After work one afternoon, I stopped past one of my favorite scenes along my varied commute path, the Oakley Cabin.  Of course, the instant I pulled up to the scene, the sun vanished behind a large ominous cloud, allowing, or rather dictating a 15 minute wait before what I expected would be a successful third try at injecting life into the massive old camera. 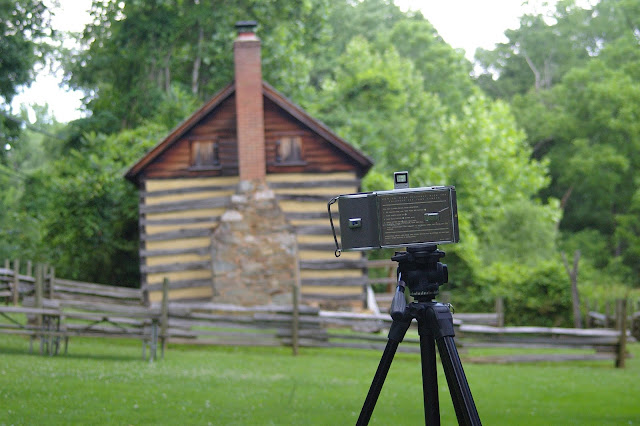 As the cloud finally gave way, I discovered the scene was partially obscured in shadow and stopped down the lens a little bit (to improve sharpness) and fired off 8 exposures of the scene, worried that I was being a bit too generous with my counter-measure, only to get the following result. 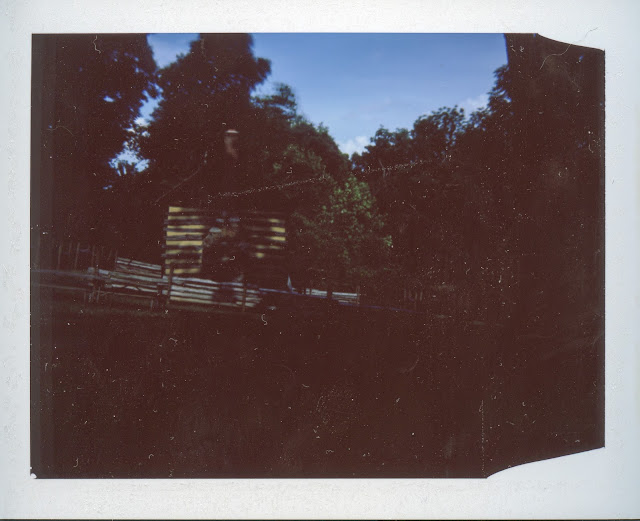 My increasing anxiety in this project becoming more evident in the poor quality of my pulls, I was starting to get daunted.  What was an impromptu $2.50 experiment was now costing a bit more in my time and energy, and still wasn't yielding better results.  If anything, the original "shot in the dark" approach of my first try was the best result of them all, save for my failure to remove the pull tab. The refinements to my technique were yielding me nothing.

As I opened a pack of FP-100 Silk to load into the jam-prone camera that started this mess to begin with, I elected to give it one more try, since removing a sheet would presumably help alleviate the pressure that often causes such jams.  My thought was to improve upon my previous effort by boosting the number of exposures to 12, and ensuring the scene I was shooting had ample sun light, something lacking in the shot of the Oakley Cabin.

Preparing to leave Hagerstown City Park, I quickly attempted to finally get the results I wanted in a scene of the lake well lit in early afternoon summer sun.  I fired off 14 exposures in total, and wondered what I'd see in my results.  Instead of pulling the film through the spreader bars, I fed it through the extraction mechanism of a model with rollers to get the following result. 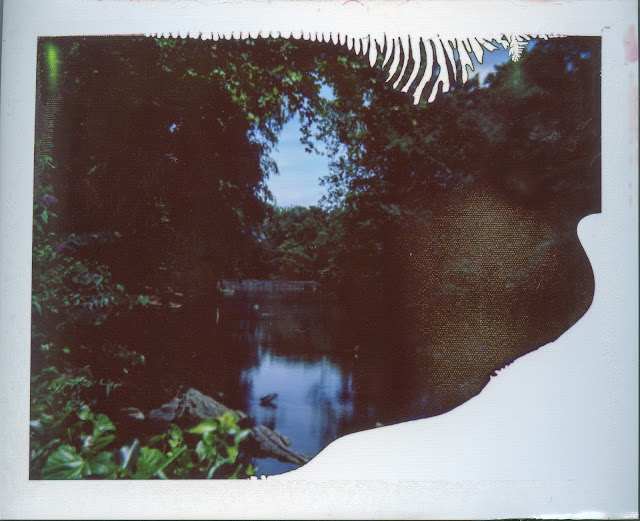 The "pull quality" of this exposure hit a new low, not producing an even rectangle, but rather an awkward shape resembling the state of Ohio.  Exposure wise, there is improvement in the light areas, but still a LOT of darkness in areas that were amply lit.  This could be a typical result for peel-apart film which traditionally struggles with contrasty scenes.

Still, it's a challenge when 14 shots on the same piece of film still shows underexposure in even the brightest parts of the image.  I wondered if some form of reciprocity failure was bedeviling my efforts to burn in the image as the film lost sensitivity to light with each successive exposure.

So after 4 tries of trying to give the J66 the dignity of going out on a good note, I'm taking a break.  Perhaps I'll find the resolve (or stubbornness rather) to continue in this endeavor at some point, but my supply of pack film is rather limited, and its use is perhaps best spent on exposures that will net a better success ratio than this.