Some things take work to get right, be they relationships, recipes, or simply routines.  And while instant gratification can be a wonderful thing, there comes a certain sense of satisfaction in working carefully to improve upon something imperfect to gradually improve upon it.

But getting to that point is not always easy.  It often takes a lot of trial and error, and some careful attention to detail to get things right, or at least close enough.

Which brings me to my latest feature... 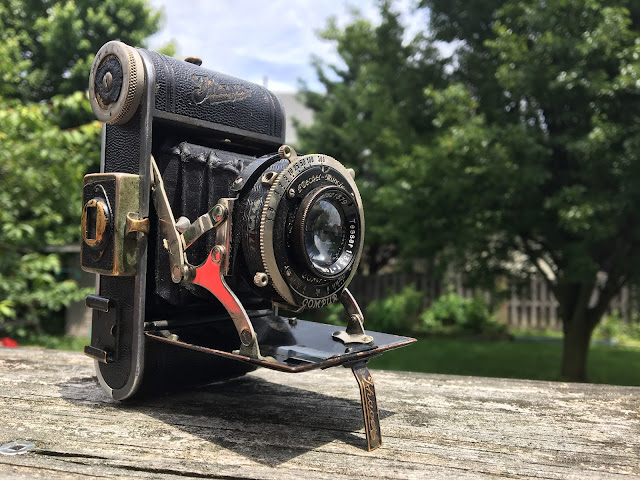 Despite looking rather imposing in this photo, the Auto Ultrix dimensions of roughly 5"x 3" x 1.5"

It had all of the hallmarks of a perfect shooter for me.  Compact and classic in style, yet capably equipped with a Zeiss Tessar lens, this Ihagee Auto Ultrix Westentaschen 2850 (hereafter to be referred to as the "Auto Ultrix" for the sake of brevity) seemed to be my "full frame" 127 format folder that I'd hoped the Agfa Billy Zero would be.  Found through a Craigslist ad, I paid a decent amount more than my typical threshold, but figured that this treat would be worth the investment, as the price was fair.

Advertised with a working shutter, I raced by subway to a neighboring state to pick up this Art Deco gem.  So interested was I to begin shooting with this folding camera that I packed along a roll of film to whirl through its chambers while I still had C-41 solution mixed.  I eagerly looked forward to see if this would actually be the camera that would become a go-to for me when wanting a good medium format image in a form factor that fits in a jeans pocket. 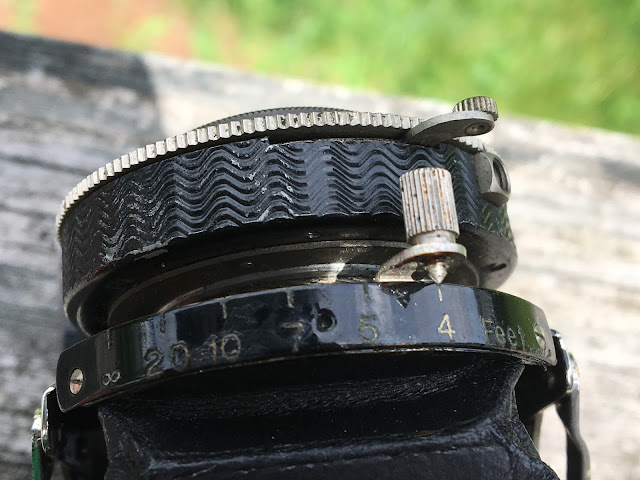 First thing that impressed me about the Ihagee Auto Ultrix was the smooth helical focusing unit, something I'd yet to see in a folding camera of this nature.

Immediately upon reciept, I was quite impressed by the build quality of this none too common camera model.  The most amazing thing was that despite comprising a tiny size, this camera actually had unit focusing via a helical rather than using a simpler front element focusing set up that only moves the front element in and out.  The uncoated Tessar lens looked clean while the shutter seemed pretty accurate across the range of settings.

I snapped off a few photos using my best guesstimation skills in Virginia before heading back to Washington to snap a few shots and then a few more on the commute back through Maryland.  Few 127 cameras likely had their inaugural rolls by a new owner spread across three such jurisdictions, but so enthusiastic was I to have this little Tessar lens powerhouse at my employ that I could not seem to snap away fast enough. 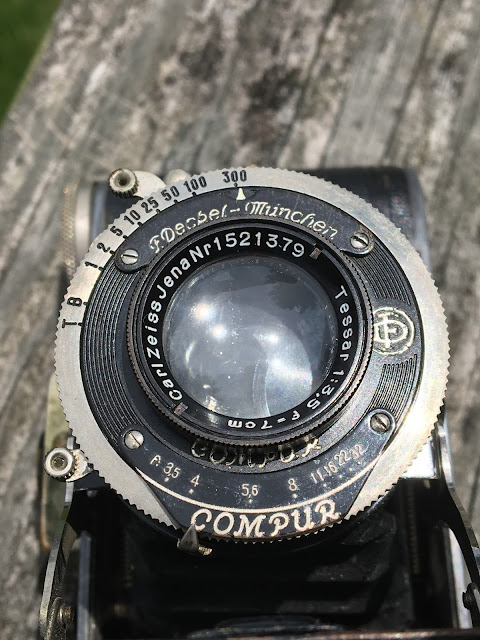 The 70mm Tessar lens is not coated, but is decently fast with a maximum aperture of f/3.5.

But I'd placed too much blind faith in this camera, only to discover results that were regrettably disappointing. Exposures were fine, but....focus, not so much.  My initial boost of enthusiasm had been ill-advised, even if I was being quickly supplied with results to give me ideas to tweak the camera if needed.

The good news was that parts of the image were in focus, and this focus seemed consistent across the frame, but just at the wrong distances.  Taking a matte screen to the film plane with the shutter on B, it appeared as if infinity focus was being achieved at about 18 feet.  My first thought was that the helical was not on the proper screw thread, but something else didn't bode well either.  When I set the focus to the 18 foot mark, which seemed to be about infinity, and the farthest inward the lens should be, the camera would not fold back up properly.  Thus, the lens was properly mounted, but there was something wrong. 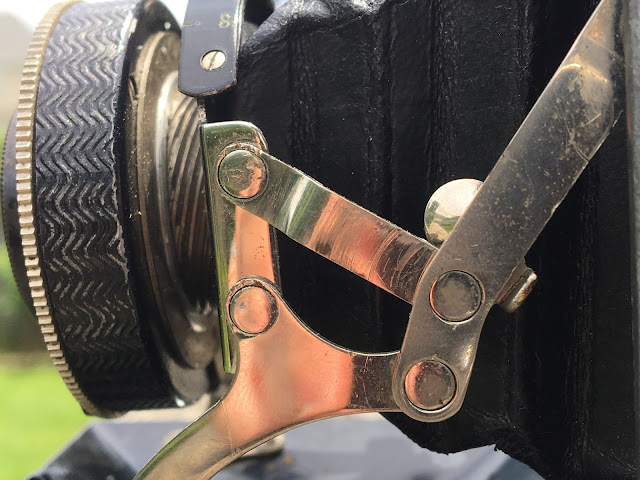 Note the offset between the inner edge of the strut and the catch, leaving the lens pushed out too far.  This was the culprit of my initially disappointing results.

The answer was surprisingly discreet. One of the struts was not fully extending, leaving a discrepancy between the actual focusing distance and those set using the scale focus distance indicator.  The only way to properly align the actual and set focus was to gently coerce the strut into its proper position. The problem is that after years of being "off.," the strut would easily fall right back out of position.

Determining this, I was able to attempt another test roll, this time of expired Agfa Portrait 160 using the most careful of movements to ensure the strut was seated properly.  This seemed to result in success from a focusing distance perspective, but something was terribly off about the film.  It had an odd sort of moire pattern permeating part of each image.  I was pleased with the progress, but still wanted to see something resembling a truly good image from this camera. 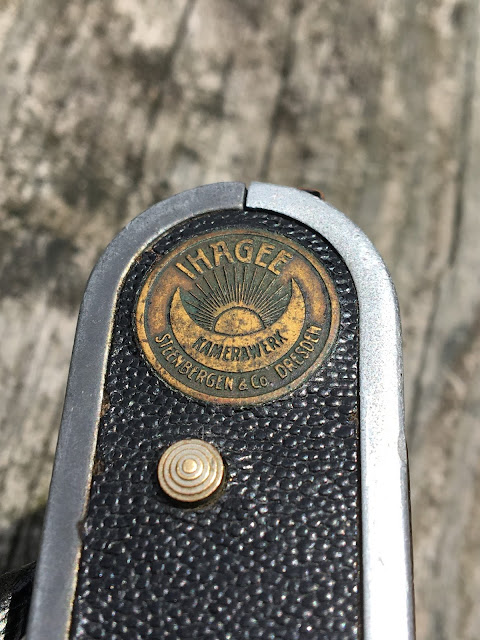 I love artistic details in a camera, and the Ihagee delights with this "rising sun" emblem on the Auto Ultrix.

I was running a bit low on 127 film stock so I thought I'd attempt to spool some 35mm stock to 127 backing and try an easy roll or two through the Auto Ultrix.  Despite my best attempts to remove slack from the film prior to affixing it to the backing paper, the film, curved a bit while passing through the film plane, resulting in images that were sharp near the edges but a blurry mess in the center where the slack was at its worst.    I tried another roll, only to get the same results.

Finally, I elected that it behooved me to run a true roll of 127 Verichrome Pan through the Auto Ultrix, again, taking great care to ensure the struts were properly positioned.  Finally, it seemed that my efforts were being rewarded with well exposed, well focused images.  A little photographic run through of the results of my many attempts with this camera follows below: 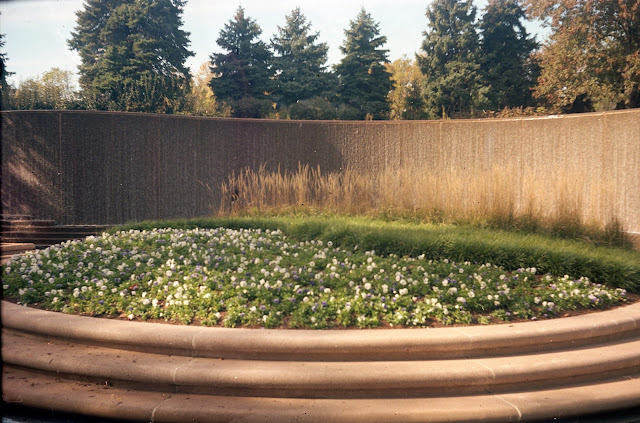 My first shot with this camera was taken in Virginia, and seems to lack the snap I'd associated with a Tessar lens - turns out the image isn't focused as intended. 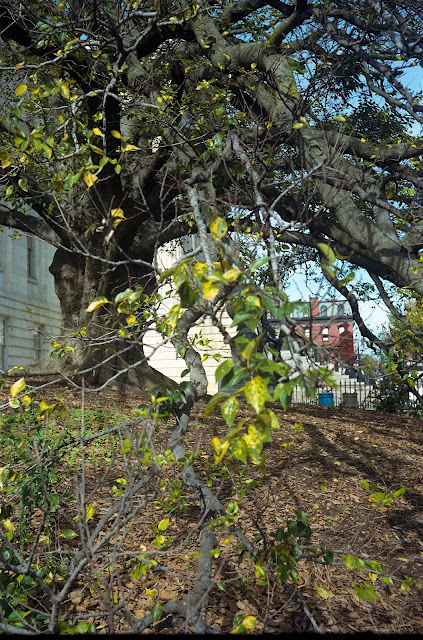 Hey, parts of that DC tree look in good focus.  Only problem is that I had set my focal point as the leaves in the foreground. 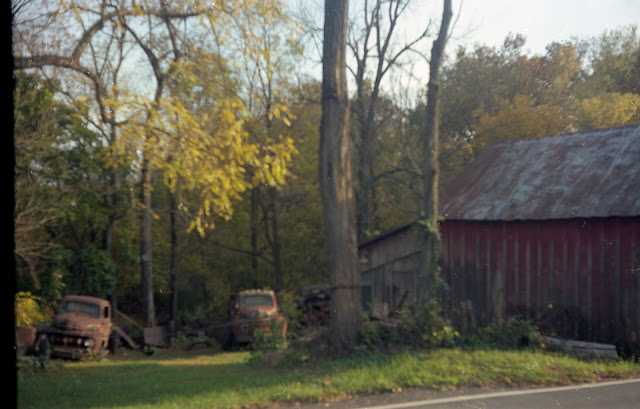 Shots set with a focusing distance at or near infinity were simply useless, such as this Maryland Fall scene. 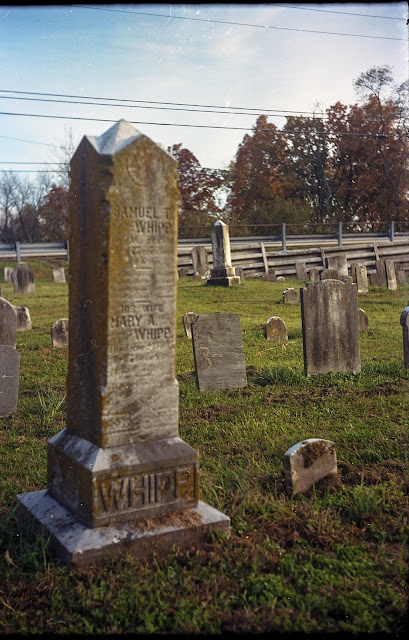 Yet again, the foreground element upon which focus was set is fuzzy, but better detail is noted in distant objects. 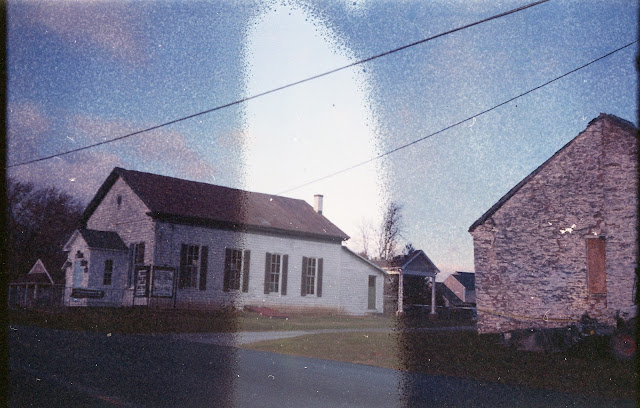 Interesting when a batch of photos leaves you both inspired and disappointed.  The focus problems seem to have been remedied by the care I was taking in these shots on Agfa Portrait, but it was tough to know for certain when most of the image appears as if it was shot behind shower glass. 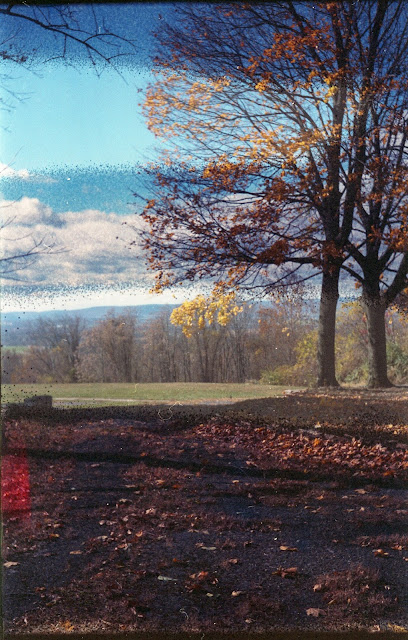 An image falling in line with what I'd hoped to see from this camera was so tantalizingly close here, and it seems this time, the camera isn't to blame. 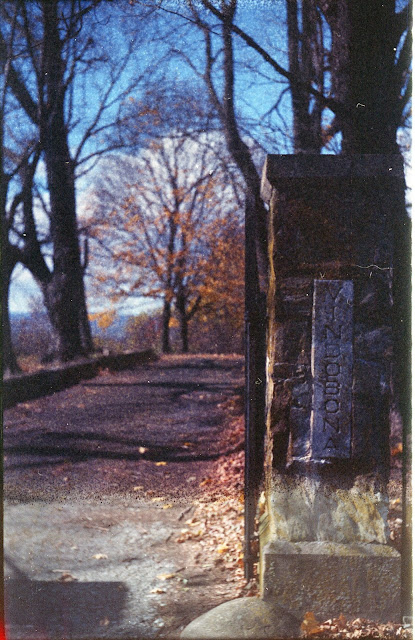 I focused upon the pillar at right, and despite the fogging in the film, I'm able to actually see crisp detail in the lettering to reassure me that the focus issues can be solved with some care. 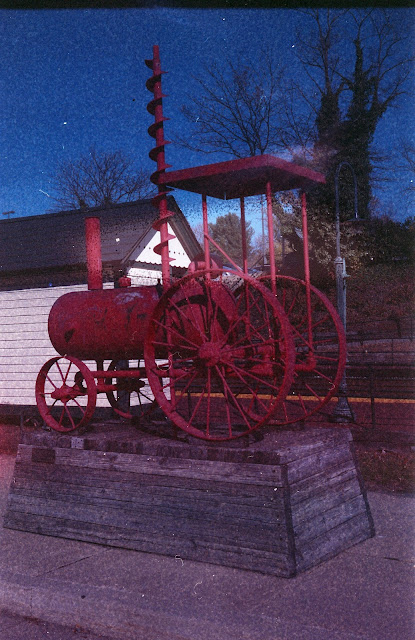 A bright sunny day is subdued by the cast permeating this bit of film, leaving only a small glimpse into what this camera and film combination would be capable of if the film was in better shape. 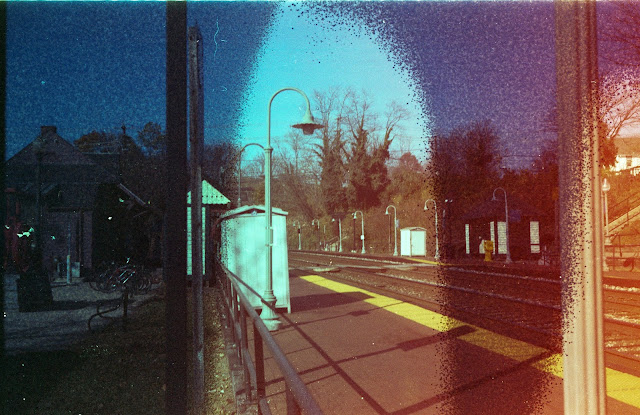 Another "porthole" type shot shows that the Auto Ultrix has some potential after all!

There is not much need to caption the following test photos taken on successive attempts to spool 135 film to 127 backing.  Each shows varying degrees of both success and failure, as I got decent sharpness near the edges of the frame, but distortion and blur in the center of the frame where the film bowed as slack allowed. 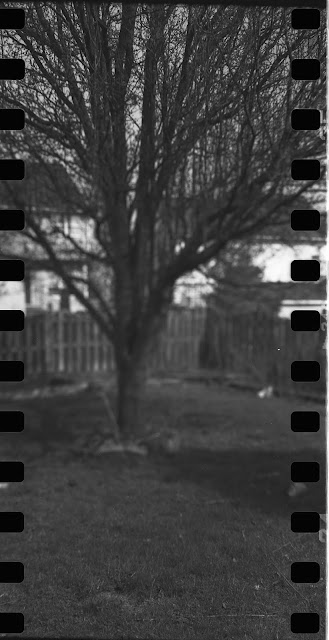 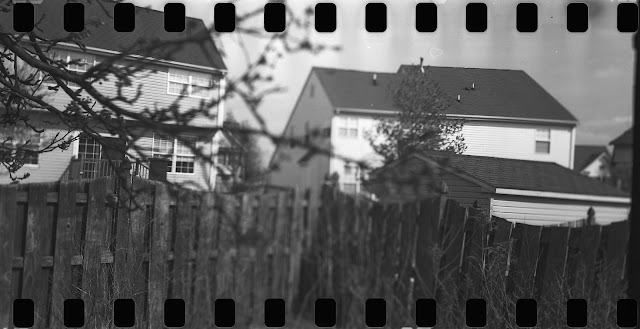 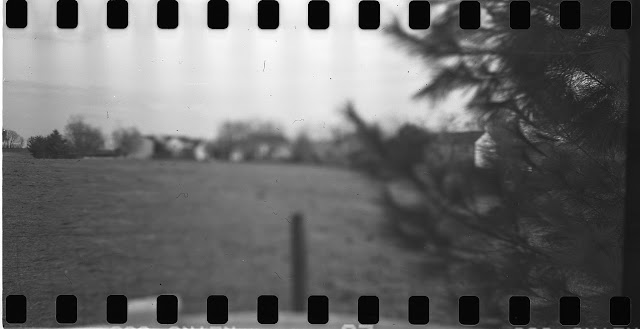 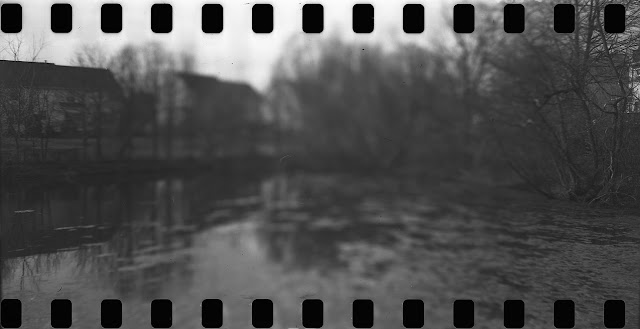 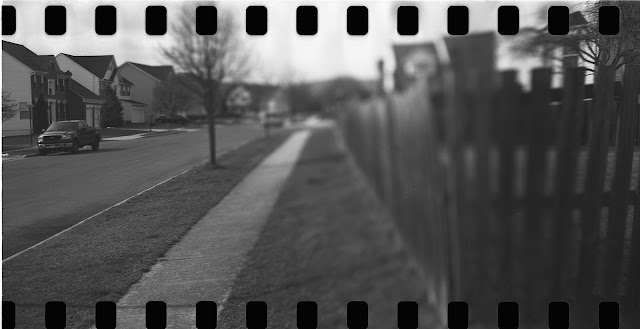 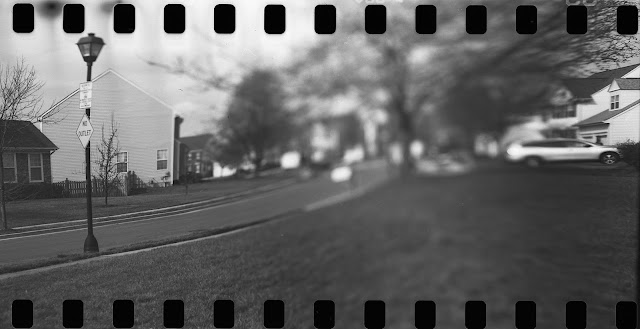 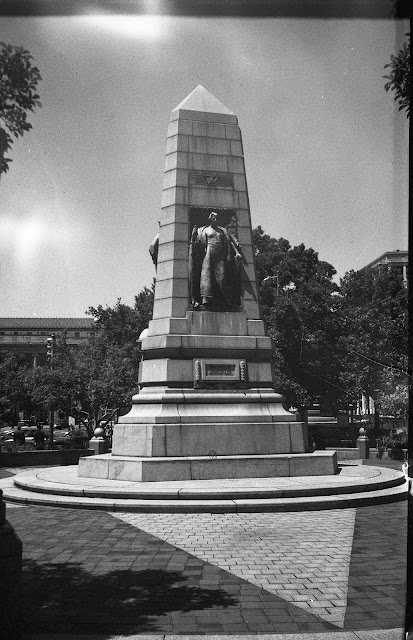 Finally, I bit the bullet and used one of my limited supply of rolls of Verichrome Pan to truly give this camera the proper vetting it needed.  In my first shot, I do notice some fogging in the film, but at pleased to see a vastly improved result compared to previous attempts to use this camera. 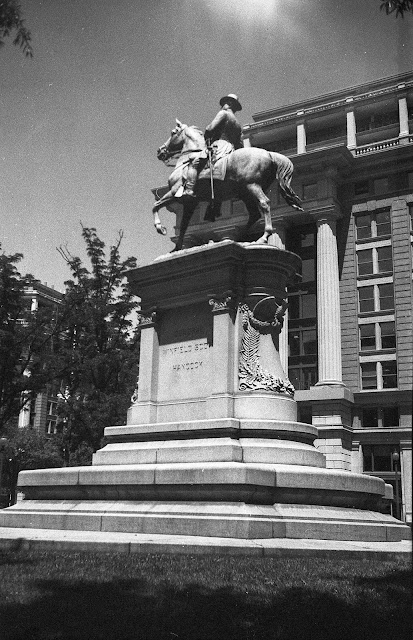 All told, the results were not always perfect.  Though this shot has acceptable sharpness, I do notice some fuzziness in the engraved lettering on the monument. 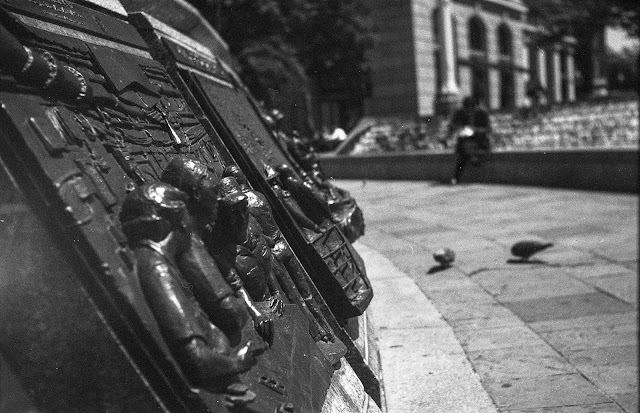 Focused at minimum distance, this shot shows the potential of the lens.  As with most Tessar lenses, the bokeh isn't terribly charismatic, but the sharpness is nice. 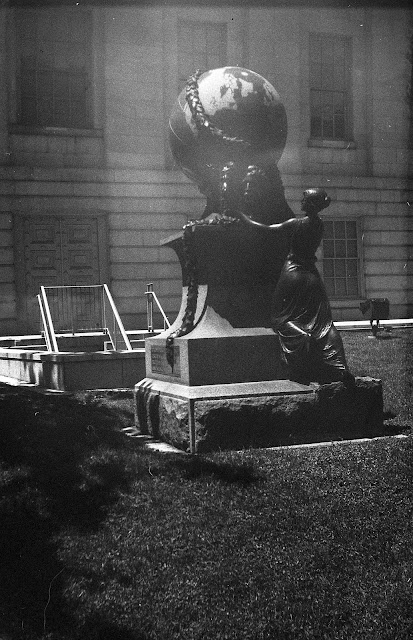 Despite some fogging and underexposure, this exposure returned a sufficiently sharp result. 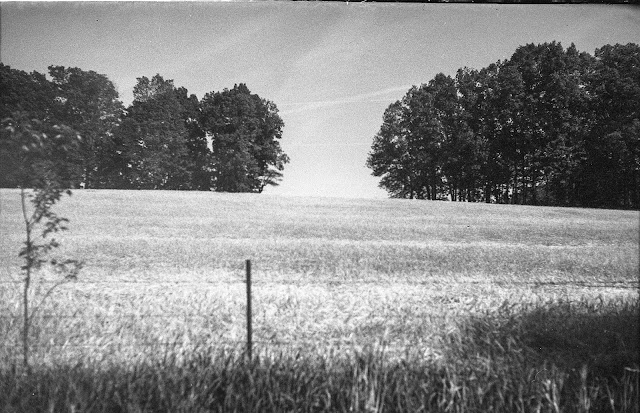 Focused distant and set close to wide open, this shot seems to accomplish more or less what I'd hoped.  At least, this camera is showing its true character. 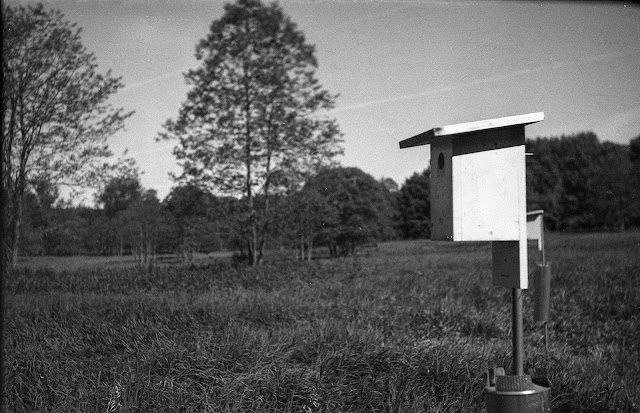 I carefully measured focusing distance on this one using an SLR lens and set that distance on the ring of the Auto Ultrix.  The camera nailed the focus more of less perfectly. 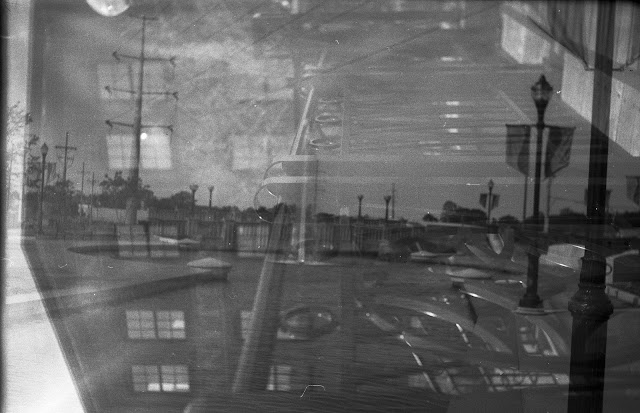 I can't really pass off double-exposures in which one is landscape orientation and one is portrait orientation as deliberate.  All I can say is Oops. 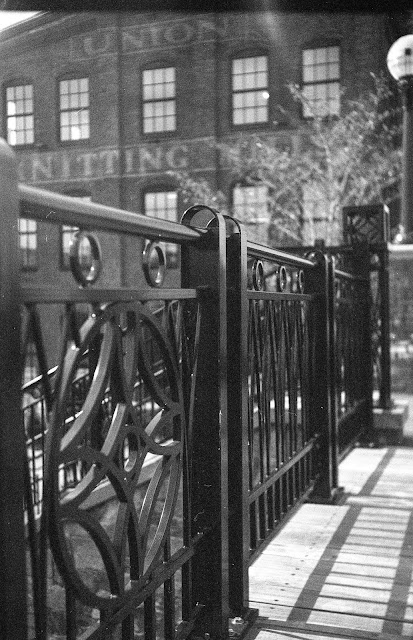 Let's try that second exposure again.  Here again, the Ultrix delivered a fine result to close out this roll of film, making me more eager to see what I can do with fresh film!

Though my Ultrix still needs some true attention to make it work properly without the delicate maneuvers I've had to employ to finally get decent results.  I plan to begin by carefully seeing if some tightening and careful attention to the struts and folding mechanism can make its operation a little less tricky.

The good news is I am finally getting good results from this amazingly compact little camera. In many ways, it is the epitome of a truly compact camera with high resolution results, and shows signs that it really can be every both of the pocketable camera with medium format sized negatives that I was hoping for!