From Russia with Lovely Bokeh: The Zorki 4

The camera sat on my shelf looking sort of lost among a handful of Japanese, American, and German counterparts, bedecked with its incongruous Cyrillic lettering on its face plate, and looking every bit the fish out of water.  It certainly didn't beckon to me, resulting in a feeling that was anything but love at first sight.

I picked it up and briefly peered through the combination viewfinder and rangefinder, and my eyes literally began to hurt to try to focus on a nearby object, as the entire field of view looked both bright and fuzzy to me.  I placed it back on the shelf, a tad overwhelmed by the operational nuances of this interesting but somewhat puzzling machine, but also confused as to why its benefactor thought I would appreciate it. 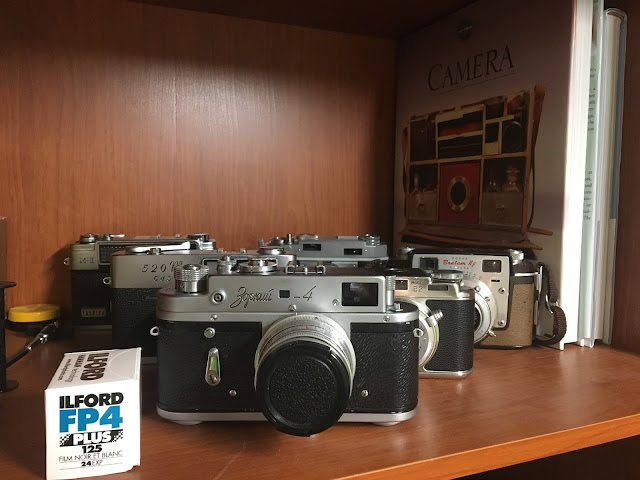 The camera in question was the Russian made Zorki 4, a generous loaner from Mike Eckman, who also runs a great site featuring vintage cameras.  Though I certainly appreciated the kindness of the gesture, I had yet to grasp just what was so enthralling about this Cold War relic that emerged in 1957 from behind the Iron Curtain.

It was certainly an attractive camera, one that certainly emulated the look of a Leica model, so much so that I would jokingly refer to it as a "Like-a." I know, really "original," eh?

It was clear that it was a well made camera, whose cloth shutter had a top speed advantage over the majority of my leaf-shutter cameras, save for the Yashica M-II.  Its Jupiter lens certainly had its fans for its bokeh, and my initial glances at the camera market for the Zorki showed it to really be an one of the most affordable screw mount rangefinder cameras out there.  Mike himself even referred to this model as being "90% of a Leica at 10% of the price." 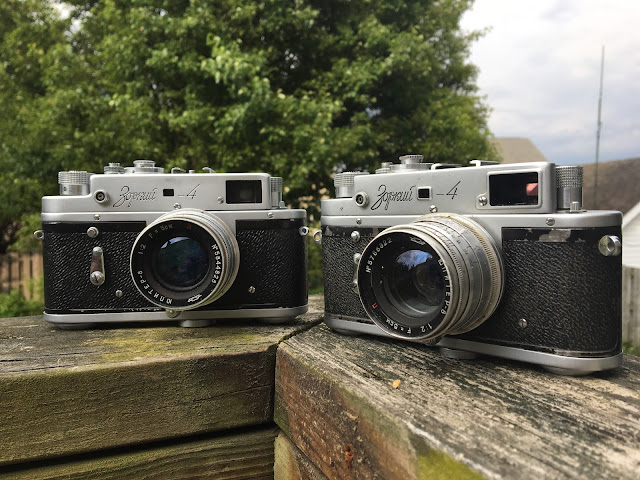 The Jupiter 50mm f/2 lens is typical fare to be equipped on the Zorki 4, regardless of its age.

So with all of this going for it, and the chance to have some fun with this camera without actually shelling out the money for one, why was I being so stubborn?  Part of it was that I was overwhelmed at the time, with a continually building queue of cameras to try out and write about, and this camera was certainly unique from anything I'd ever shot.  I determined that this was a camera that would offer me the most if I could find the time to focus on it individually rather than mixing it in with a few other cameras to take out shooting at once. Sure that rule applies to pretty much any camera, but this one seemed just a bit more needy to me than some others.

The other main part of my initial distaste was the fuzziness I saw in the viewfinder.  I certainly didn't want to get a migraine in the process of doing what is supposed to be an enjoyable hobby.  The solution for this turned out to be the simplest of things.  Turns out that Mike and I have different eyesight, and I didn't initially know that the Zorki had a diopter adjustment.  A quick move of the control knob and the viewfinder suddenly became crystal clear to me.  And with this, my realization of why Mike was such an enthusiastic fan of the Zorki 4 became crystal clear as well. 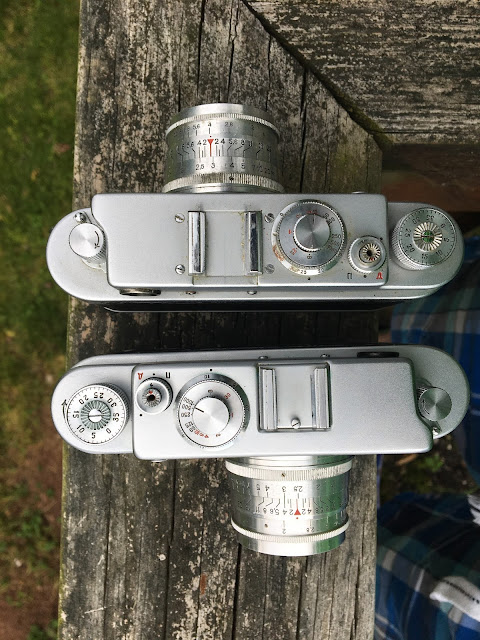 My impressions of the Zorki drastically improved, I was now at the point where I could approach exploring this camera properly.  Admittedly, I didn't set aside time to work exclusively with the Zorki as I'd initially thought I should, but this turned out to be a good thing in many ways, as I was able to instantly appreciate some aspects of the Zorki in comparison with other cameras of various eras.

There are some rules to follow when using a Zorki 4 that are atypical of the shooting style of other more recent rangefinders.  Rule #1 is to wind the film (thus tensioning the shutter) prior to changing the shutter speed.  Ideally, it would seem this should be done just prior to taking the next shot, as I figured it best not to have a tensioned shutter sprung for days or weeks, thus putting wear on the tensioning.  However, for this first rule to be followed in my initial tests with this camera, I found myself always winding the film immediately after shooting so that I didn't violate the greater rule of accidentally changing speeds on a shutter that hadn't been tensioned.

Most other quirks of the Zorki are more readily amenable.  For example, there are no detents in the aperture ring, so it tends to always require double checking.  Also, like the Exakta VX, the Zorki comes with a take up spool that can fall out if you are not careful.  Once you have the viewfinder properly "synced" with your eyesight, it is a terrific gem that far exceeds those of most later Japanese models. 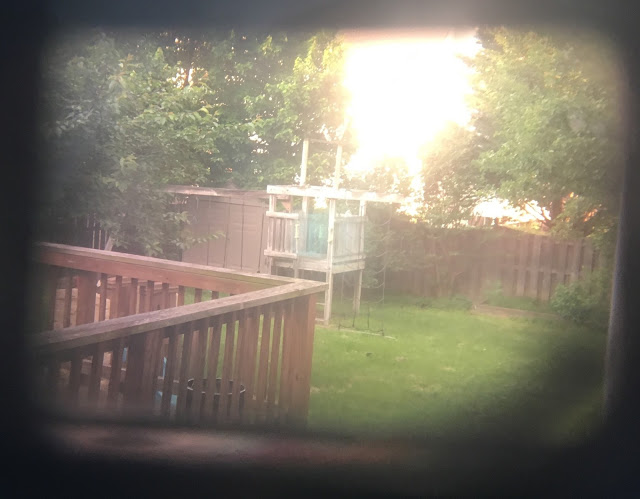 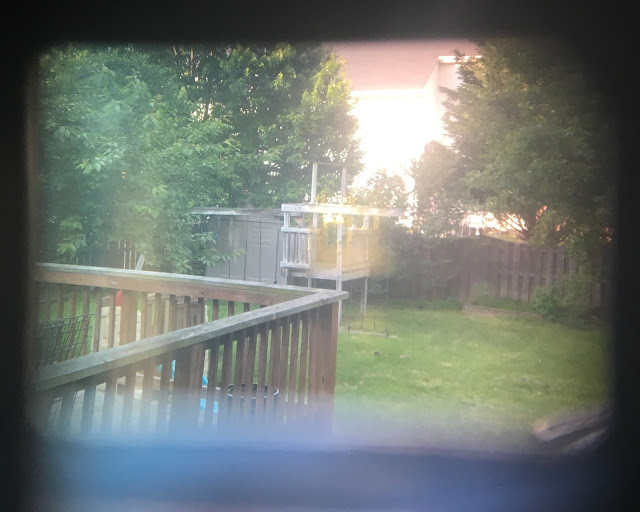 And shooting through a roll in the Zorki 4 feels surprisingly satisfying.  It makes for a photo taking experience that is willingly repeated again and again, and in seemingly no time, the roll of film is completed.

Results from the Zorki 4 only perpetuate this self-fueling prophecy even more.  With a properly collimated rangefinder, the Zorki will readily nail focus through the Jupiter-8 lens, leaving a well defined subject and, when opened up adequately, a really lovely amount of bokeh rendering.  A properly working Zorki 4 may well be one of the most satisfying "budget rangefinder" experiences to be had, and one that leaves the feeling that you're not settling. Reviewing the photos taken with the Zorki, the prevailing thought is "I can't wait to get back out with that camera again soon!" 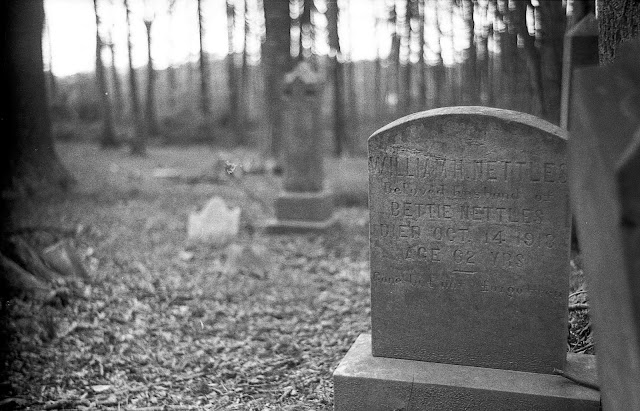 Seriously, what more could you ask for?  Good sharpness on the in-focus portion of the photo, outstanding bokeh in the distance, and the perfect amount of contrast on a classic film formula like Ilford's FP4. 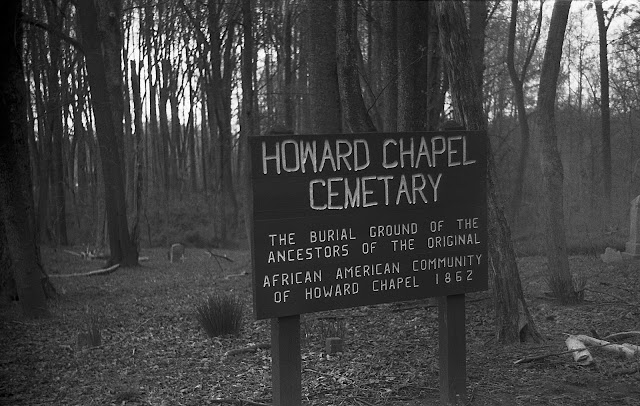 I found the rangefinder quite easy to focus in every lighting situation, and the Zorki rewarded me kindly. 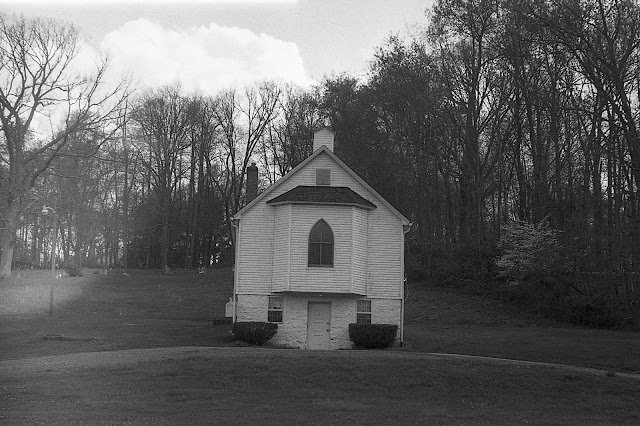 Stopped down a bit, the Zorki showed more or less outstanding sharpness across the frame. 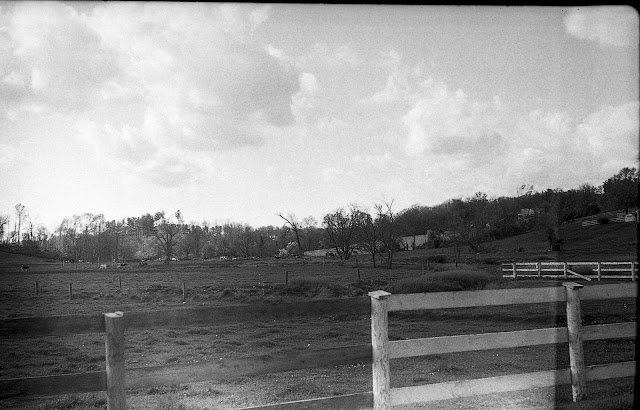 Contrast of photos varied, but was generally acceptable or far better. This shot was taken in somewhat tame light however. 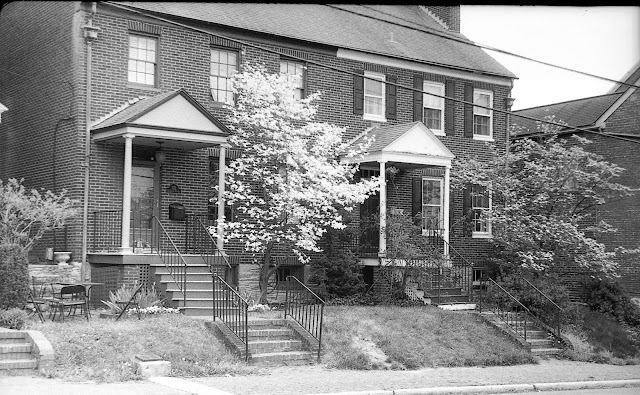 Distant subjects always rendered well, with none of the mushy tendencies sometimes seen in landscape photos. 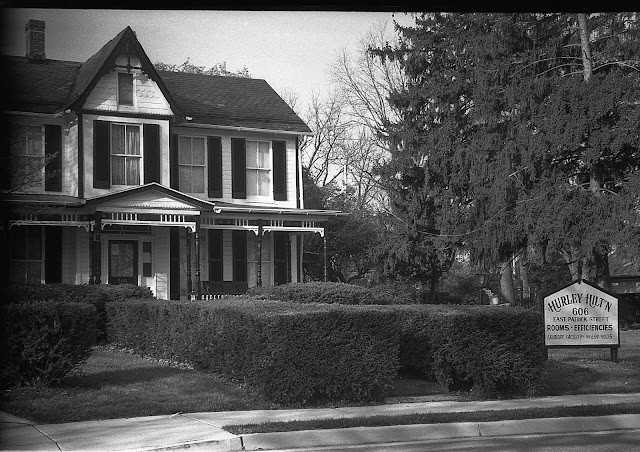 A nice crisp daylight shot, with a hint of vignetting evident on the corners. 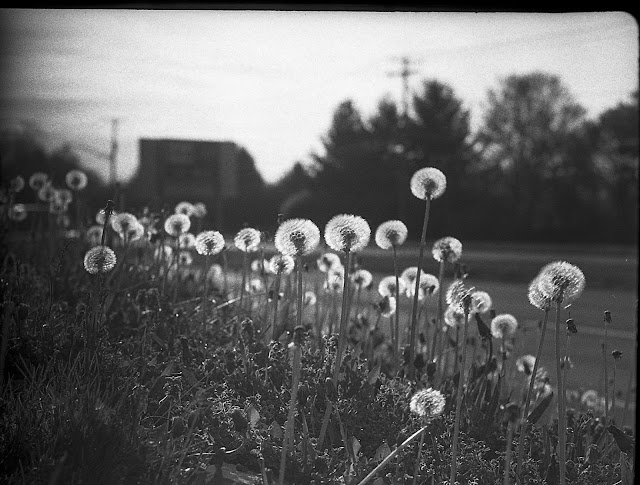 Backlight seemed to be no issue with the Jupiter-8 lens.  These dandelions render beautifully. 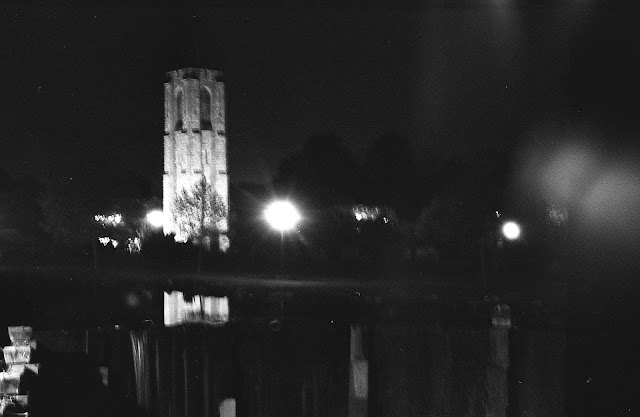 A little bit of motion blur in this "Zorki After Dark" image. 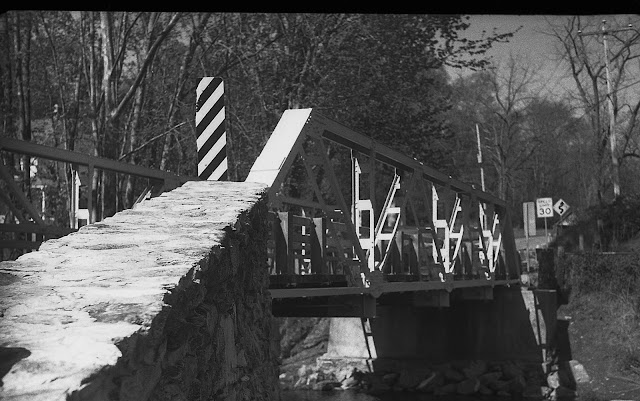 A slightly slow shutter resulted in some blowout of highlights in this shot. 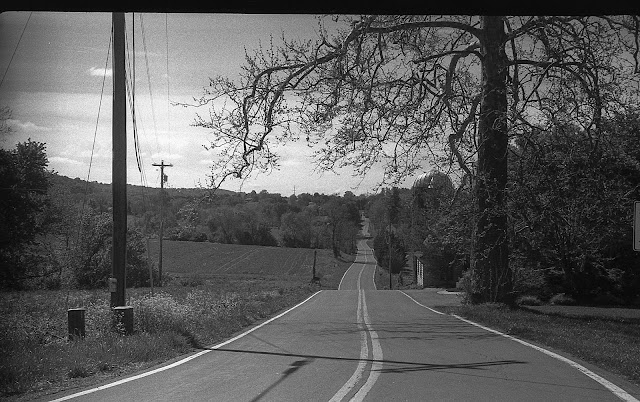 The Jupiter-8 lens is phenomenally sharp when stopped down.  Taken on a lovely day, the Zorki recorded a stellar result. 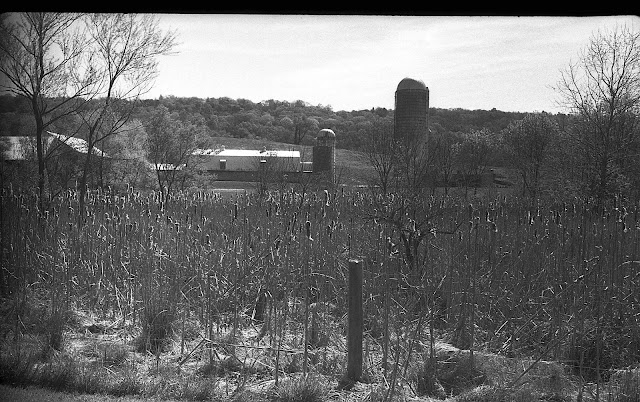 A quick shot with focus on the post in the foreground came out with great highlights on the mid-ground details. 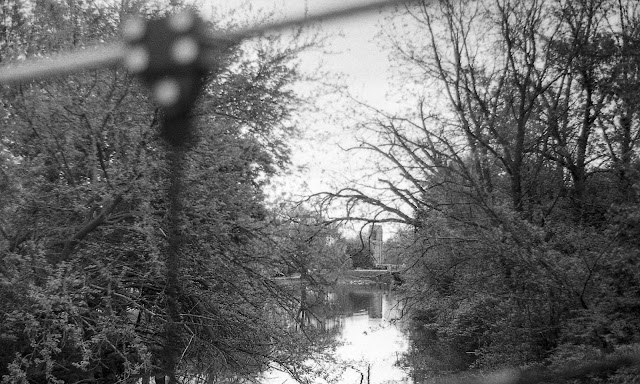 Occasionally, I like to try to reverse the bokeh effect and focus distant with a near object out of focus.  Never seems as effective as the other way around. 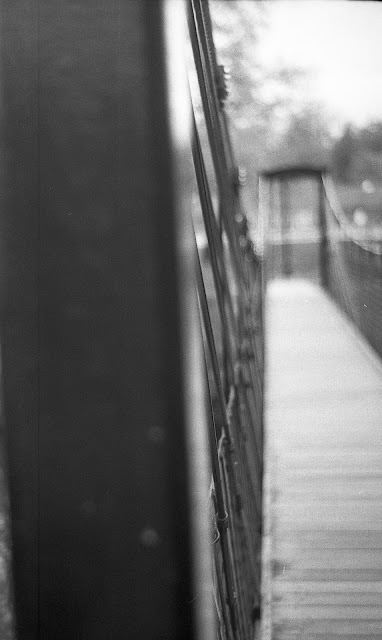 Shot with narrow depth of field, the bokeh is nice, but the composition doesn't work for the focusing point of the subject. 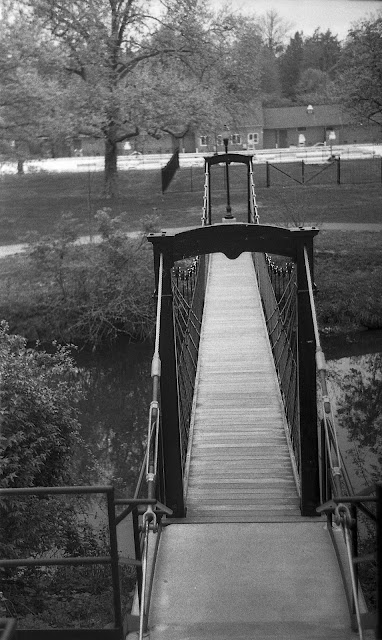 A more defined image works better, even if there isn't the oodles of bokeh. 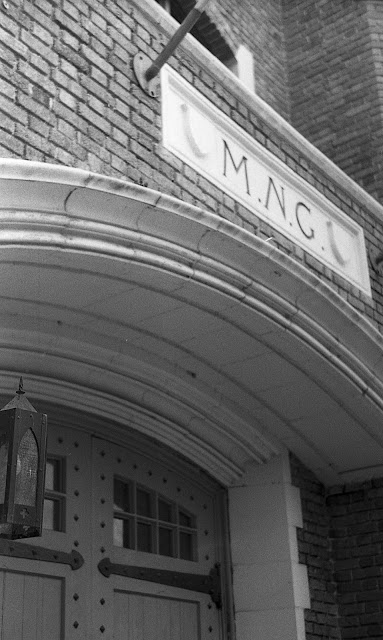 The 50mm focal length of the Jupiter lens was a bit limiting at points, as I found myself wanting a wider focal perspective here. 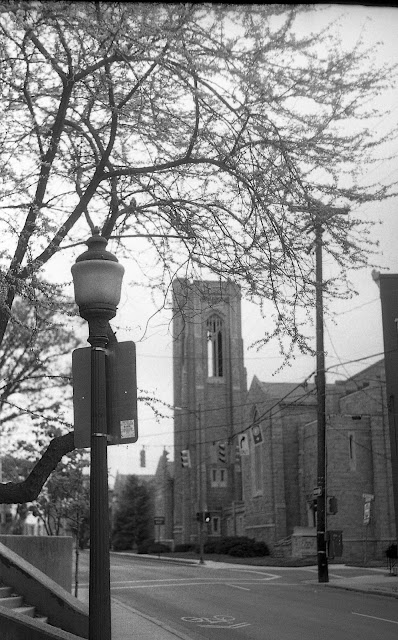 But largely, the focusing point was just perfect enough to enable some compression of perspective and achieve some differentiation between foreground elements in focus and the background. 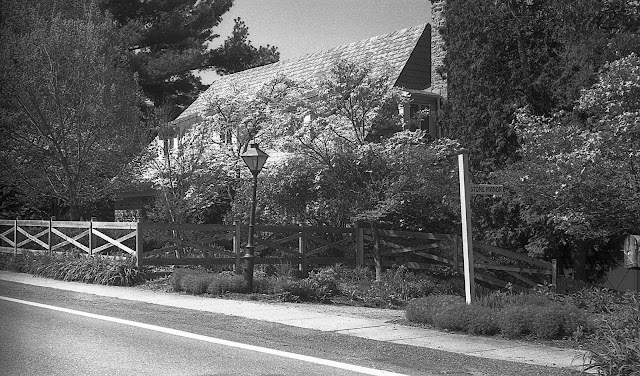 Yet again, the camera works amazingly when stopped down in bright light. 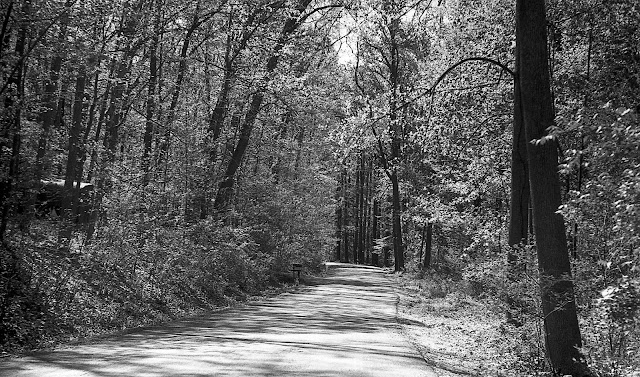 Spring blooms a canopy over one of my favorite wooded roads.  The highlights render wonderfully through this lens. 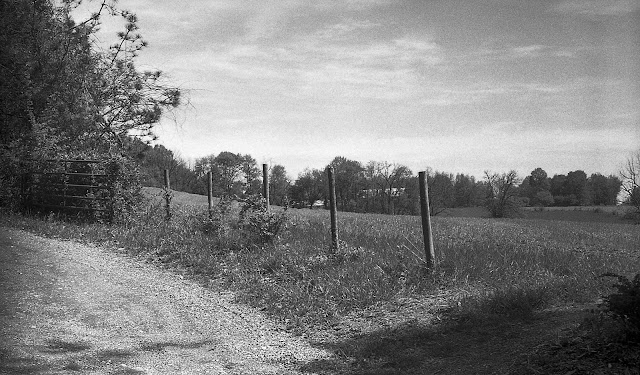 My haste in snapping this shot is evident.  Best not to rush the shots on the Zorki. 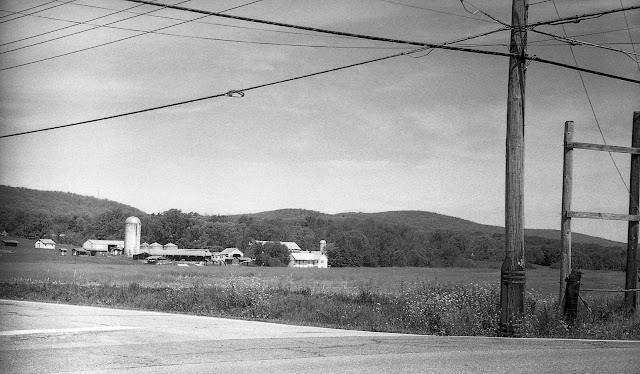 Is that vignetting or capping that is causing some darker tones on the left of the image? 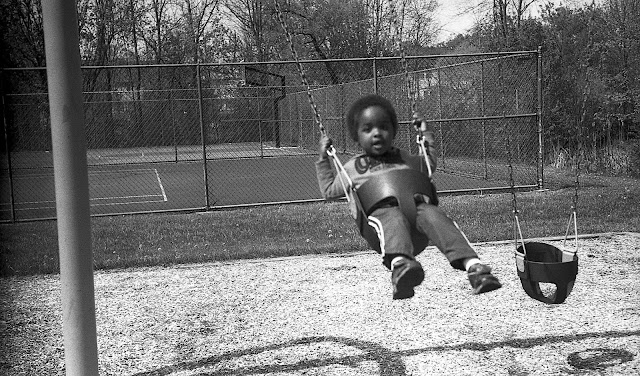 Despite all that it has going for it, the Zorki is not a fast action point and shoot.  It will stop action OK, but it's tough to keep a subject in focus when moving, even when you can predict a bit. 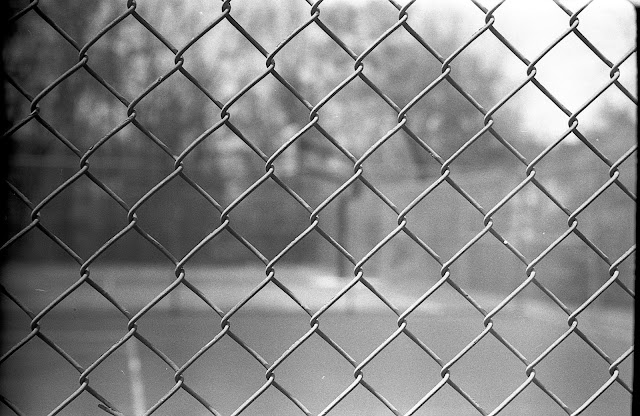 It likely doesn't give technically perfect images as readily as a Leica, but that doesn't stop me from being very happy with my results with the Zorki 4. 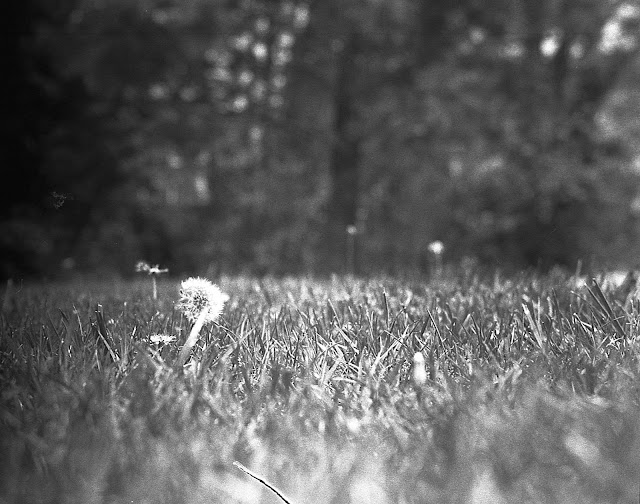 The closer, easily focused and snapped, and came out simply wonderfully.

If indeed the Zorki 4 is 90% of a Leica at 10% of the cost, does that make it worth it?  For me, that answer is easy.  Absolutely.  The Zorki 4 delivered some images that I was elated with, some others that were perfectly acceptable, and little to nothing that I didn't like.  The experience of shooting it was immensely rewarding, and the results were outstanding.  For some, any "sacrifices" from the Leica gold standard are not worth the savings.  I'm certainly not one of those people.

Sadly, the Zorki has to go back to its rightful owner.  But the story hardly has a sad ending.  I wasted little time in picking up a Zorki of my own, and look forward to a happy future ahead shooting roll after roll through its chambers.  And this camera has certainly been a gateway of sorts for me.  As of this writing, it is NOT the only camera with Cyrillic lettering among my collection!  ;-)