Some camera reviews are easier than others for me.  Give me an overlooked quirky model and I can readily reveal the fun aspects of shooting one of these unique models supplemented with what little bits of interesting information that I can discover about the model and its maker.  It's a fun process that makes for a fun to write review that I always feel proud to share.

But give me a well-known and well-loved model with oodles already written about it, and I will be crippled by a severe case of writer's block.  After all, what more can I add to a conversation that has already been so extensively covered from more or less every conceivable angle.  And that is just where I am in trying to pen a fitting review of the Olympus OM-2N. 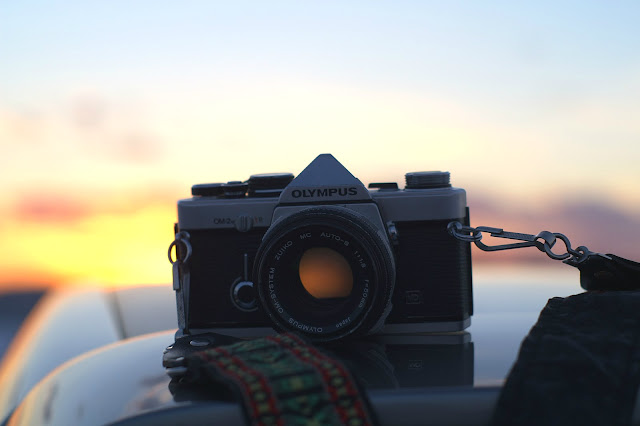 The Olympus OM-2 is perhaps the most well known camera for which I have in my stable and I've yet to write a post.  On its debut in the 1970's (arguably the prime period of manual focus SLRs), the OM-2 was very well received for its compact size and easy to use feature set. Forty years later, the OM-2 is still a darling of a camera for many of today's film shooters, and has any number of positive write-ups online.  Two of my film shooting buddies, Mike and James both have favorable reviews posted of the OM-2 that can relay more about the camera's history and attributes than I can ever hope to convey here.

So what can I possibly write about on the OM-2 given how much has already been mentioned about this cult classic?  Perhaps I should be perfectly content to just relay my experiences with this well-known camera, and take a side seat from "informing" you, the reader, about this fine machine.  After all, this isn't an obscure esoteric model like the Zenith Comet or the Ansco No. 2A Goodwin.

I stumbled across the OM-2 in the Spring of 2016 in a nearby Goodwill.  For the price of about $15 complete with lens, it was something I simply could not walk away from, even if it was a more "mainstream camera" from my usual fare.  Upon getting it home and replacing the battery, I was pleased to discover that the camera and meter seemed to work, even if I wasn't yet ready to delve into the world of 1970's SLR models.  At least the camera was there whenever I was ready to give it a try.

As it was, the camera was finally loaded with some long-expired Panatomic-X late in the Summer and then largely sat awaiting some use as other models with color film loaded continually jumped in front of the Oly in order to be included in my Summer film queue.  I finally shot the roll of Pan-X with a sense of detachment that was the direct result of my over-stimulation from shooting over a dozen different models in the weeks prior.

This was a travesty of sorts for two reasons.  First, I hadn't really given ample thought to the photos which I was taking with a beloved and long-discontinued film stock.  Second, I wasn't giving ample thought to the experience I was having with a beloved and long-discontinued film camera.  After a summer spent shooting an interesting hodge-podge of rangefinder cameras that all bore some base similarity to each other, one would think that the experience of using a metered camera with a direct "through the lens" view would be downright refreshing, but I was likely numb by this point.  I developed the film and could take pleasure in seeing that the decades old film stock had seemed to reap some rewards, but that was the extent of it.  The nimble OM-2 was spotted back on the shelf awaiting future assignment.

Each time I'd have the chance to pass by the mothballed SLR, a sense of guilt would pervade me.  As Fall gave way to Winter, and my interest in SLR cameras gradually grew, I contemplated giving the OM-2 a more attentive try.  And in an odd parallel that was sheer coincidence, I elected to load the Olympus with yet another slow black and white emulsion that hasn't been produced for years, and also has a devoted following: Agfapan 25!

On this second pass through the camera, I paid more attention to the most endearing features of the OM-2; from the compact size to the big and bright viewfinder that is a pleasure to compose images through. And while I don't typically wax poetic about things such as film advance levers, I couldn't help but be impressed at how fluid the lever on the OM-2 was in its winding.

Despite the level of attentiveness I was attempting to give the OM-2, and despite its easy to use nature, I just never quite got the feeling that this camera and I hit it off in the way that I'd hoped.  Was I being too "hipster" because this camera wasn't esoteric enough for my tastes, or was there actually something to the OM-2 that left me feeling a bit numb. 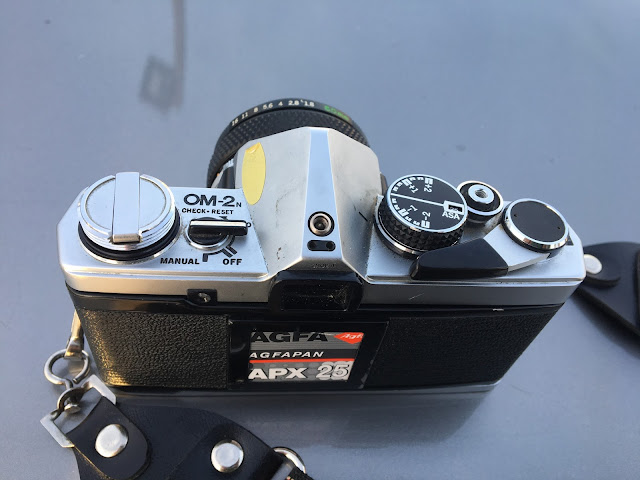 Top deck layout is easy to figure out on the OM-2.

It might actually have been a little bit of both.  The most quirky aspect of the OM-2 is one feature of the camera that I tended to find the most challenging to work with: the location of shutter speeds and apertures.  On most SLR cameras, the shutter speed is selected on the top of the camera while the the aperture is set using a ring on the lens mounted closely to the camera.  On Olympus models, the shutter speeds are set in a ring around the camera mount, making their location close to that of the aperture on other SLR models, while the aperture ring on the lenses is located far outward from here, adjacent to the focusing ring. The result to the uninitiated is that this camera tends to be a bit more complicated to use in manual exposure situations than other cameras with the more typical layout.  It often just seemed easiest to switch the camera over to its aperture-priority autoexposure mode and just enjoy the shooting experience, which is fine as well. 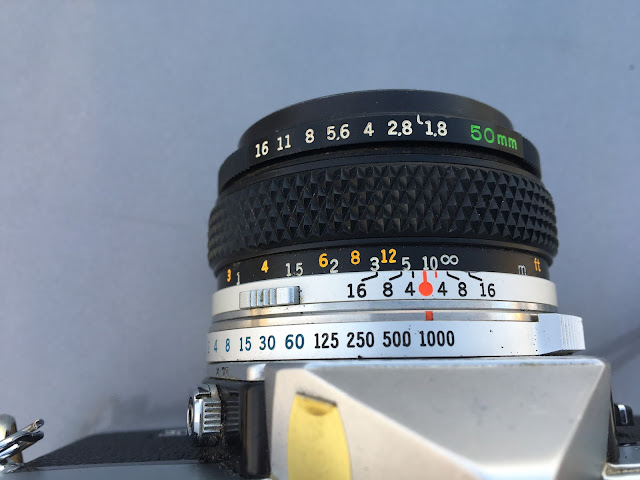 Above, the usual location of aperture rings on many SLR's is where the shutter speed settings can be found.  Further out near the filter mount is where the settings for apertures are found.  Below, the bright viewfinder of the OM-2 is certainly among the best in its class! The shutter speed array at far left cleverly moves out of the way when the camera is in manual mode. 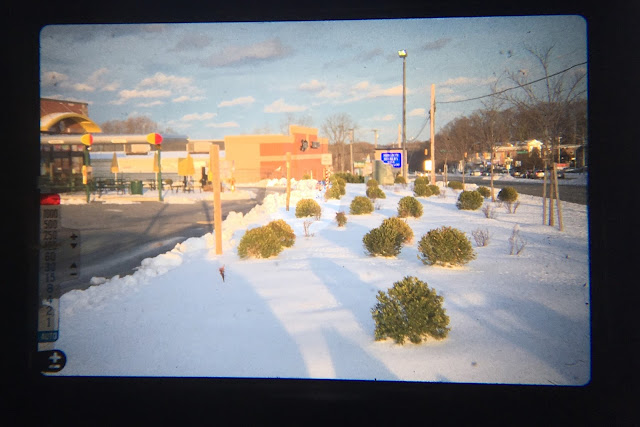 And in this manner, the OM-2 not only provides a very usable experience but also some excellent results.  In fact, this camera seems most at home leaving the exposure to the OM-2's CCD meter, letting the OTF meter take over once the shutter has been released.  Still, there is a bit of a feeling of disappointment that the rather unorthodox method of manual shooting on the Oly leaves a bit to be desired.

But let me be honest here.  When I'm given a camera with a reliable auto exposure system, I'll tend to leave it in the "A" mode anyway for at least 80% of my photos.  It's only those few that seem to scream as if they need adjustment that I may tweak.  So given this, the Oly is a great tag along camera in which one can simply choose their aperture as they go and shoot merrily for most shots, and since the manual exposure option exists, the shooter only needs to adjust to the rather unorthodox control dials periodically.  When shooting in AE mode, the location of the aperture dial requires a little recitation, but isn't at all a deal killer.

When all is said and done, the main value of a camera is the quality of photos it takes more than modest idiosyncrasies of the camera used to take said photos, and in this regard, the OM-2 did a really good job.  Olympus surely put forth a well built, well tailored, and well oiled machine with this camera, one that certainly befits the reputation of such a legendary model.  Though I wasn't in love with the OM-2 on account of my own quirks, I certainly did look forward to seeing what it could produce. 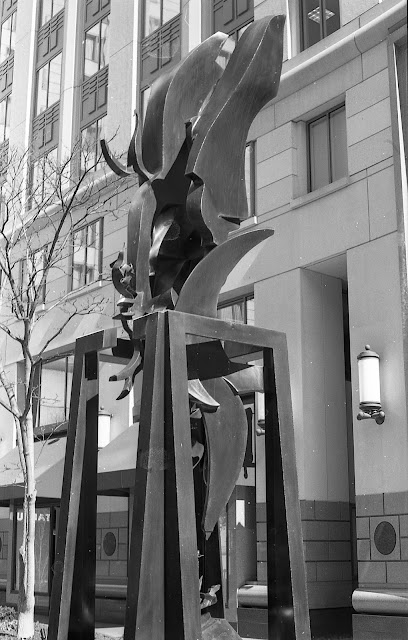 With Agfapan 25 in its film chamber, the OM-2 delivered some fine images through the Zuiko lens. 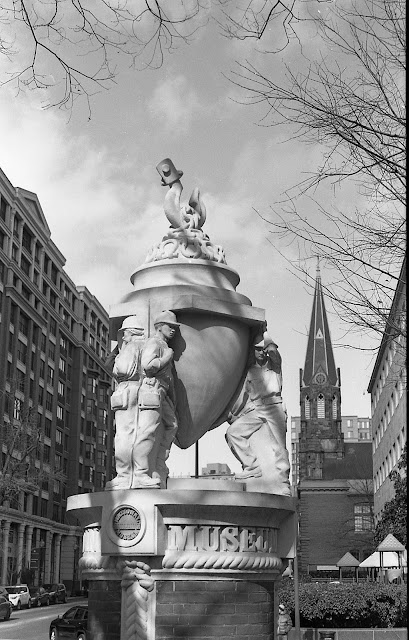 Framing on the OM-2 is pretty easy thanks in large part to the bright, over-sized viewfinder. 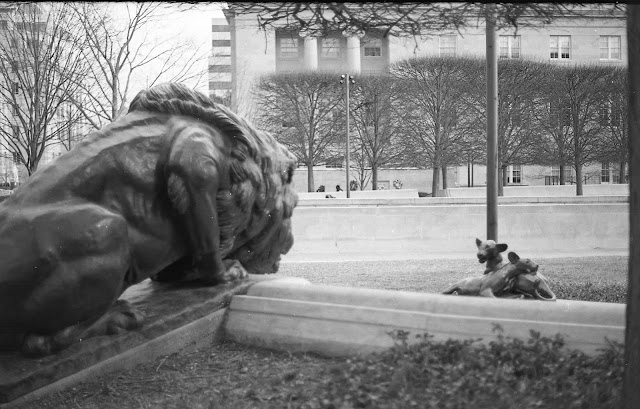 I did have a hiccup here and there with focusing, but these were the exception rather than the rule. 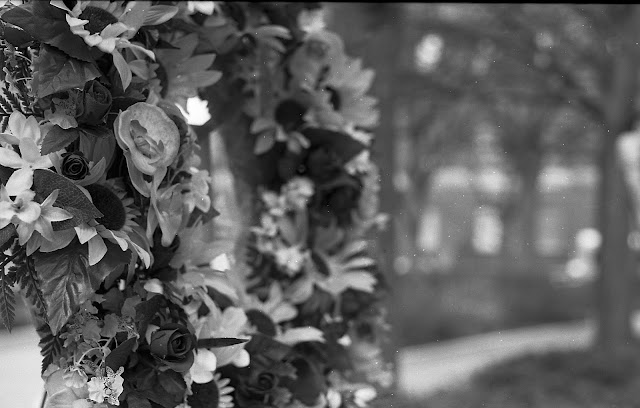 Closely focused shots on the Zuiko 50mm lens left a very pleasant bokeh to the out of focus objects in the distance. 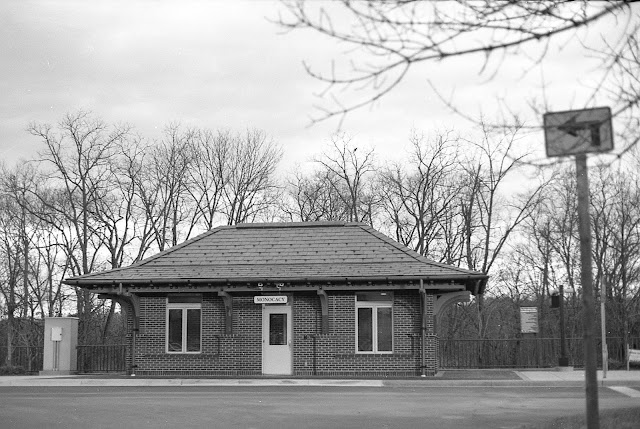 Shot at wider apertures for distant shots, the 50mm gave a nice sharpness as well as limited depth of field. 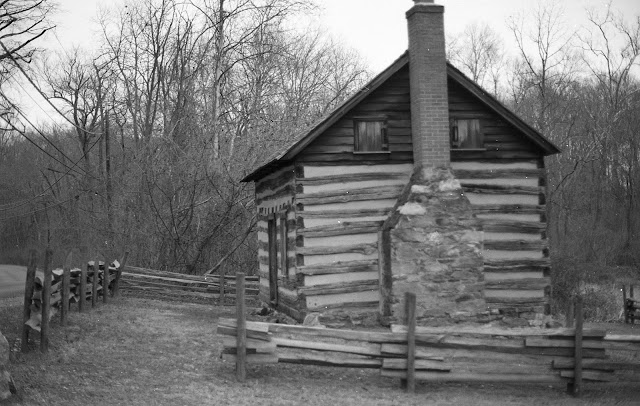 Despite the slow speed, Agfapan 25 is actually well suited for marginal light. 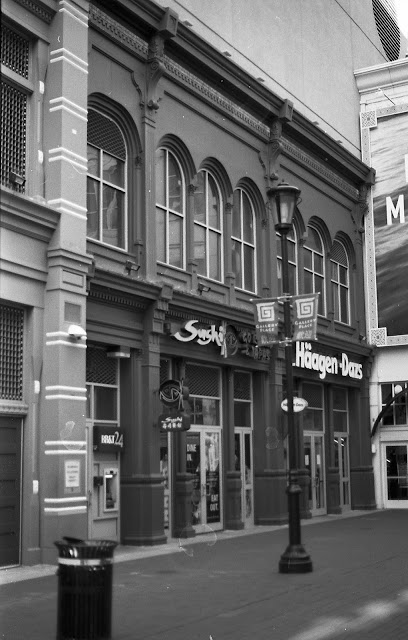 Some softness and perhaps a hint of motion blur on this image taken under strong overcast. 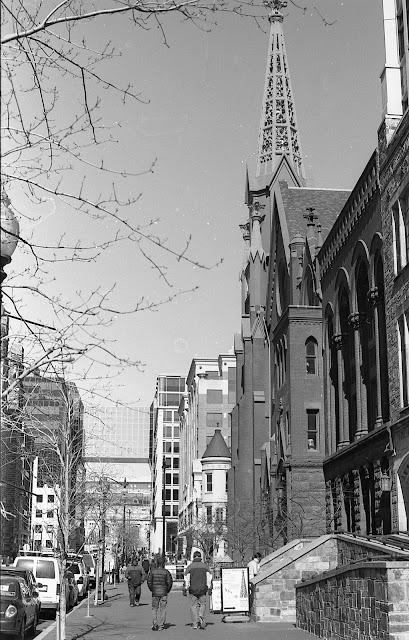 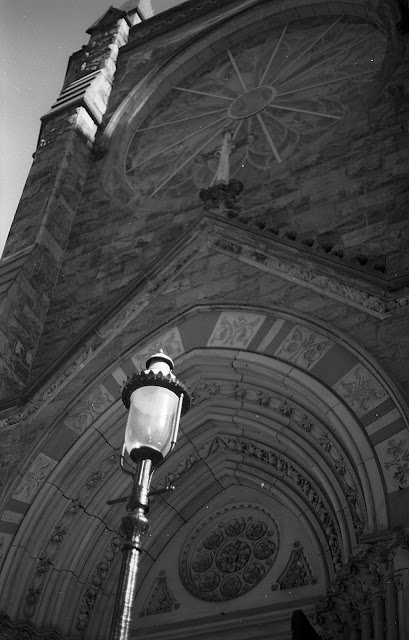 Even on an image like this with a decent distance to the subject and not a huge amount of comparative distance separation to the background, the 50mm lens manages to make the subject stand out. 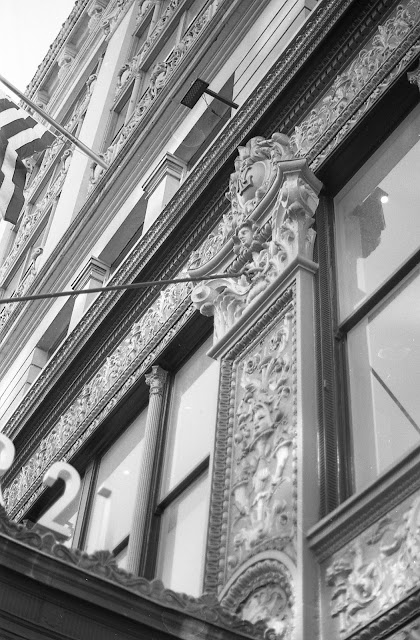 Again, some noticeably shallow depth of field in images shot on the Oly. 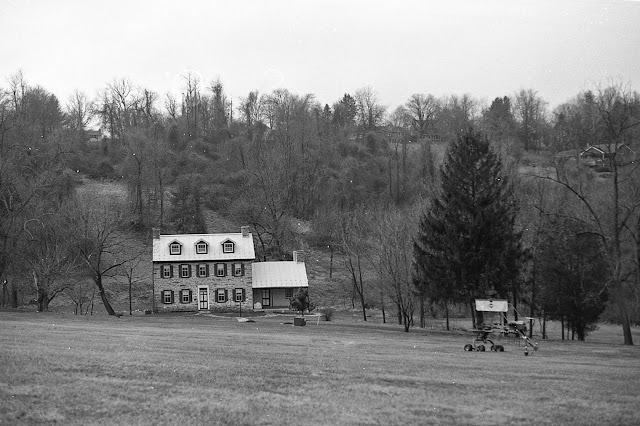 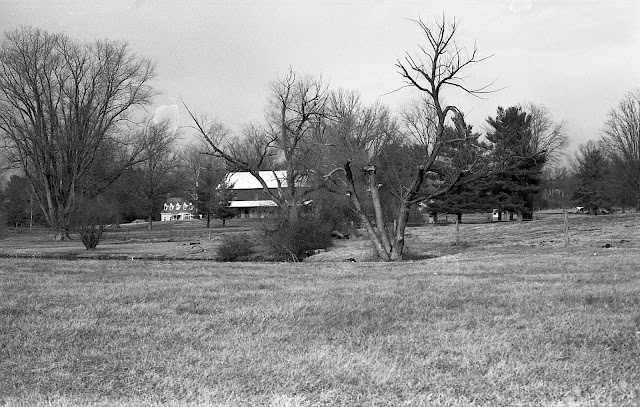 Some softness near the edges, but I still find the snap in the image to be outstanding. 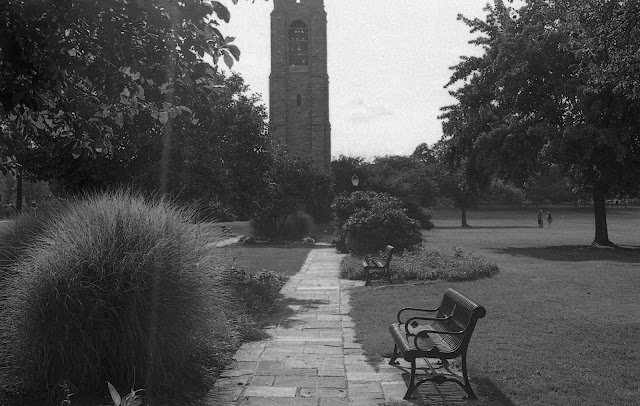 Using Pantomic-X that was older than the Agfapan, I encountered more base fog but still completely usable results. 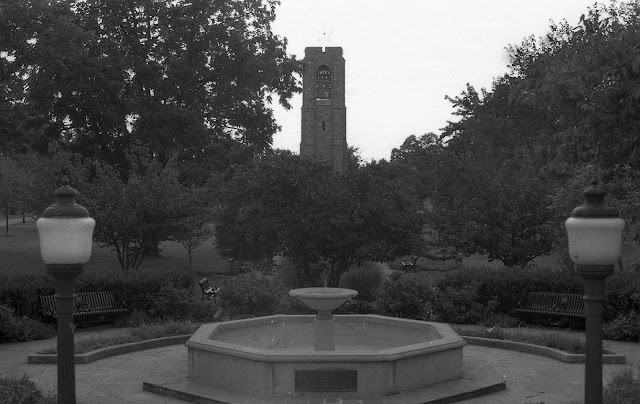 Some shadow details were muted with the Panataomic-X but this was more the conditions and the film rathern than anything specific to the camera. 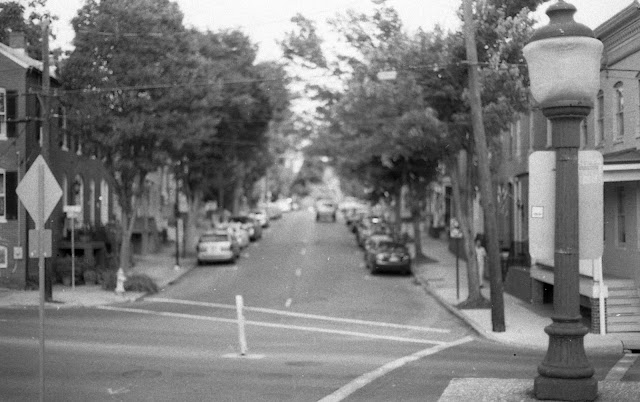 Rating the decades-old Pan-X at ISO 20, I was able to get particularly limited depth of field which worked well on the Oly. 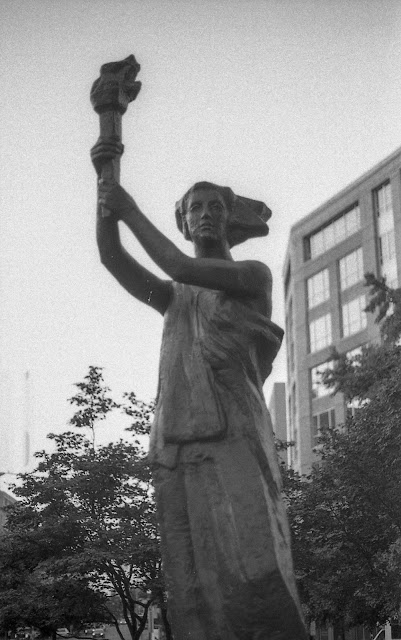 It seems haste was the main reason why I got a few shots like this that were not properly focused.  When I shot this, I was rather hurriedly walking to the train station to head home. 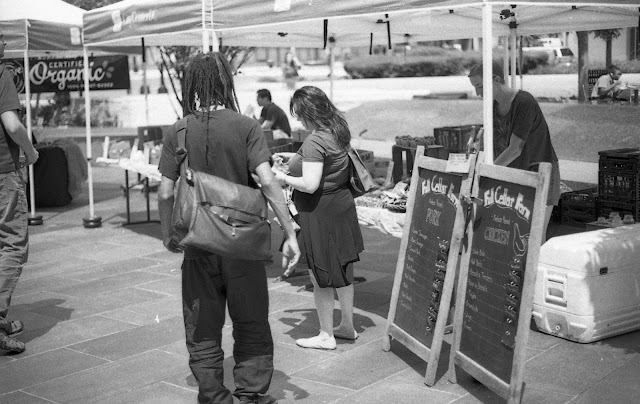 Under sunny skies in noon-day conditions, the Pan-X and Oly delivered some excellent results. 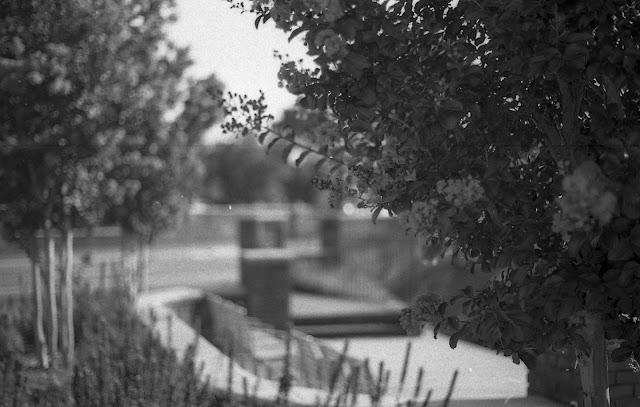 Focusing when wide open had its challenges that I didn't always master with the Oly despite the large and bright viewfinder. 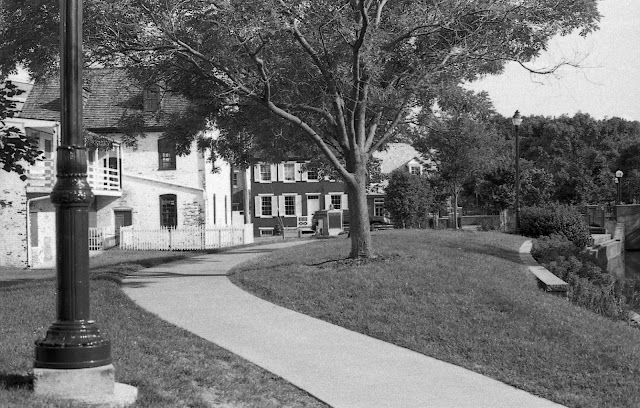 Stopped down a bit though, the camera and I worked well together. 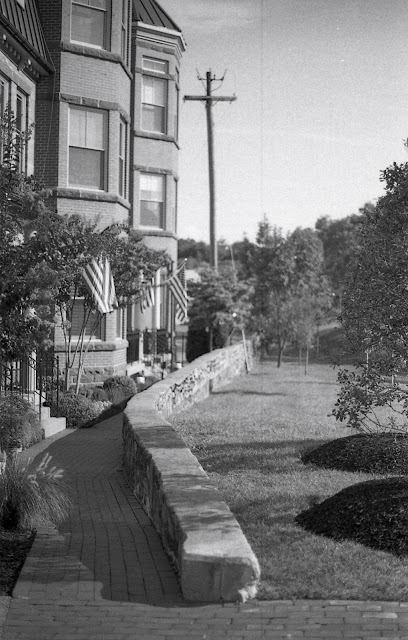 A nice capture of a warm summer afternoon. 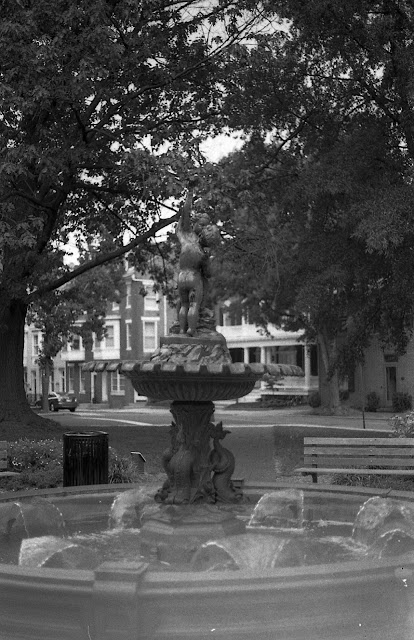 Some fogging at one end of this shot, but still a decent enough result.  Light was only marginal. 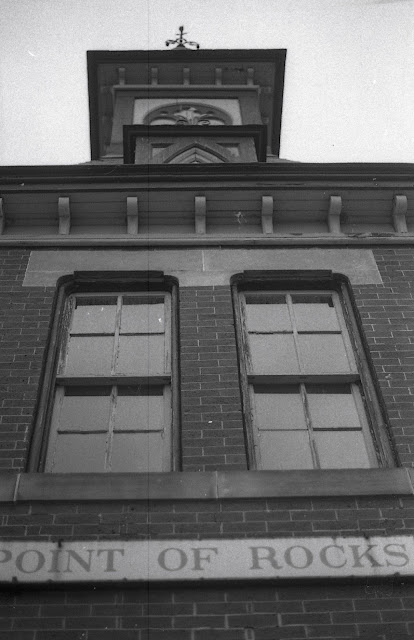 Another wide open shot - even with a distant point of focus, the depth of field is very limited. 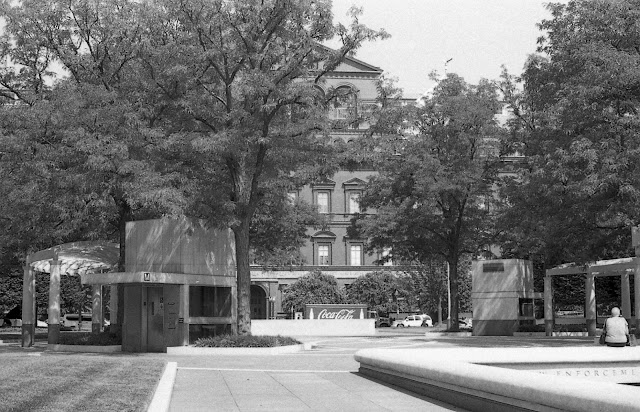 Another lunch hour shot that spotlights some of the best that the Pantatomic-X film has to offer.

Perhaps my recollections above don't tell you anything about the Olympus OM-2 that you did not already know of, but that was certainly not my goal.  Given how well covered this camera is in the modern world of the internet, it seems all I can simply say is that yes, the Olympus OM-2 is an excellent camera with a hint of unconventional layout issues that might deter, but not completely discourage the more rigid SLR junkies, given that the results it provides are certainly worth a bit of adaptation.

And with that, I've managed to pen a write-up for this well-covered camera.  Hooray!
at 09:00