How Low Can You Go? Mr Brown Low ISO 6 Speed Film from the Film Photography Project

Reading some of my postings, it doesn't take too long to realize that I'm a fan of slow speed films.  I rarely shoot 400 speed film, and actually like to stick below 100 if at all possible.

Still, there are times when even Rollei RPX 25 is too fast for me: when I'd like to open up the lens fully on a sunlit day and get some fun shots with limited depth of field.  I've managed to try a few super slow speed films with speeds near 1 and 3, but there are times when these are admittedly just a bit too slow.  I lamented that there was nothing in that middle ground between 6 and 12 speed.  Sure I could shoot 25 speed film with a polarizer to slow it down, but shooting with a quaint old camera that would require hand-holding an SLR-designed polarizer in front of the lens is admittedly something of a hassle.

So when I saw the Film Photography Project offering an affordable limited edition film with a speed of ISO 6, I just HAD to snap some up to try!

Mr. Brown Low ISO film comes in a 24 exposure roll for just under $3.00 a roll.  It is listed as being a thin based, high contrast film that develops well in most typical developers.  I had no idea just what to expect from this film, but elected to put it to work in one of my favorite "adapted" cameras: my Kodak Bantam RF with the 24mm square mask.

I took the camera along with me on a couple of errands, stopping for photos at the Rose Hill Manor in Frederick, as well as a few other locations around town.  I kept my expectations minimal, and they were exceeded.  GREATLY exceeded!

I "stuff" loaded the film into my FR tank reel (the really thin film base was a bit too tricky to try to load into steel reels (trust me, I tried), but the thin and pliant base curled obediantly into the channels of the FR reel when pushed in from the outside.  A 32 minute semi-stand in 1:99 HC-110, and voila: negatives!

True to the claims, the results were high in contrast, but with only the most modest of tweaks using the raw image filter in Photoshop, the results on most were exceptional.  Have a look! 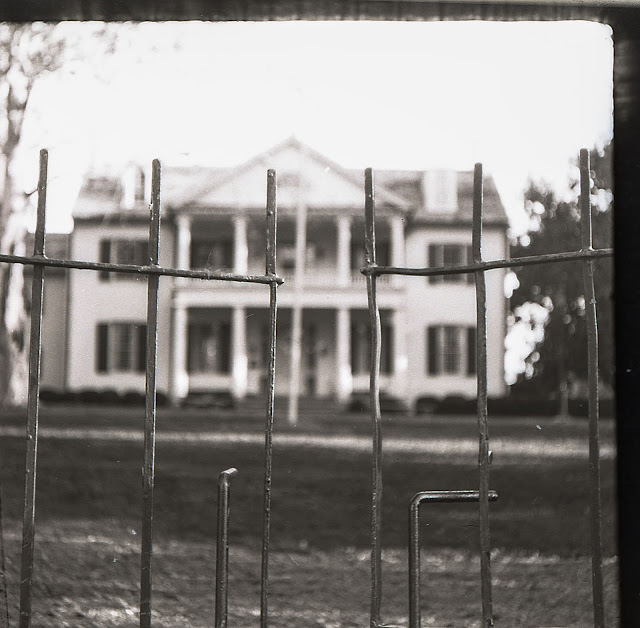 The Bantam RF has repeatedly been a go-to camera for me, and this image illustrates just why.  The rails of the grate rendered ever so sharp while the manor blurs in the backdrop to create a very nostalgic image. 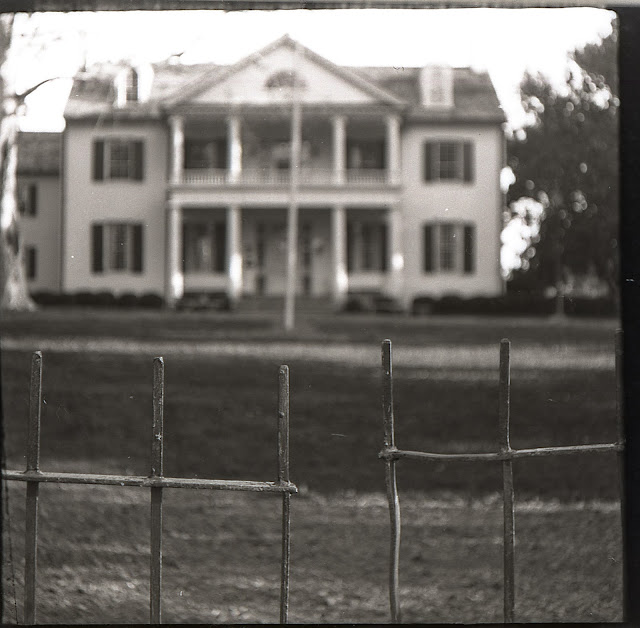 A one-stop under bracket with a different composition is not quite as good from the technical or creative side, to no fault of the film. 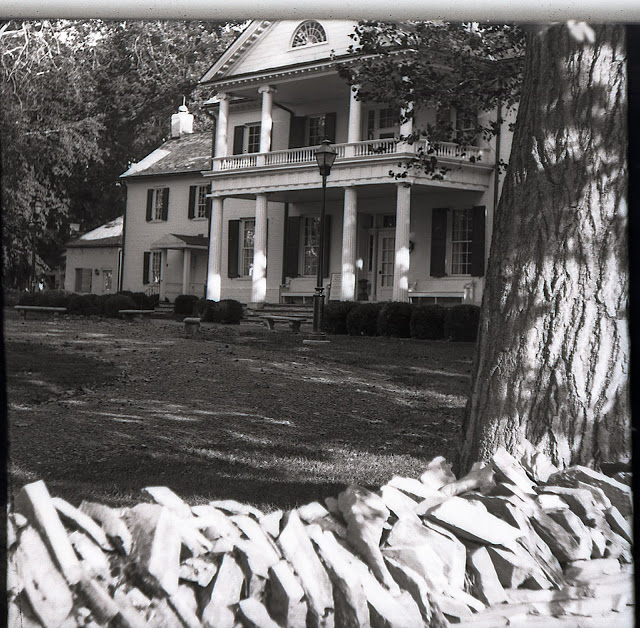 In varied light, the contrast of the film is pretty severe, resulting in blown highlights as seen in the foreground.  Fortunately, it still works well in this image, and the intended focal area is very well rendered. 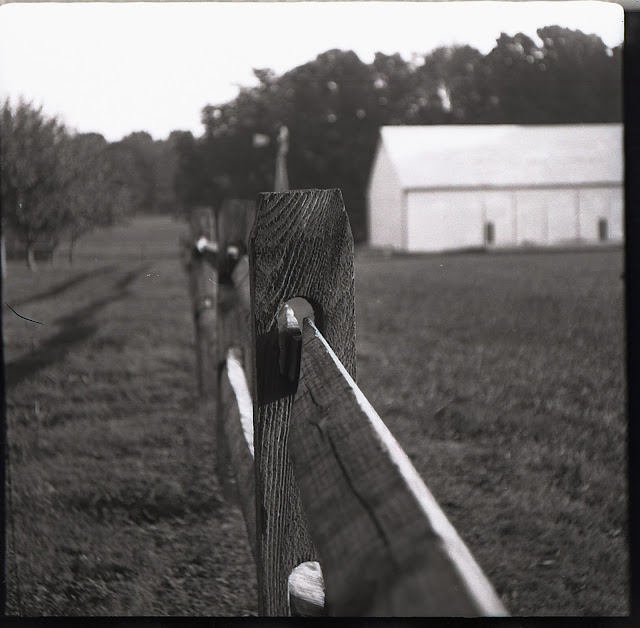 The Bantam nailed focus exactly where I wanted it for this shot taken at f/3.9, proving yet again why I love this rangefinder camera so much. 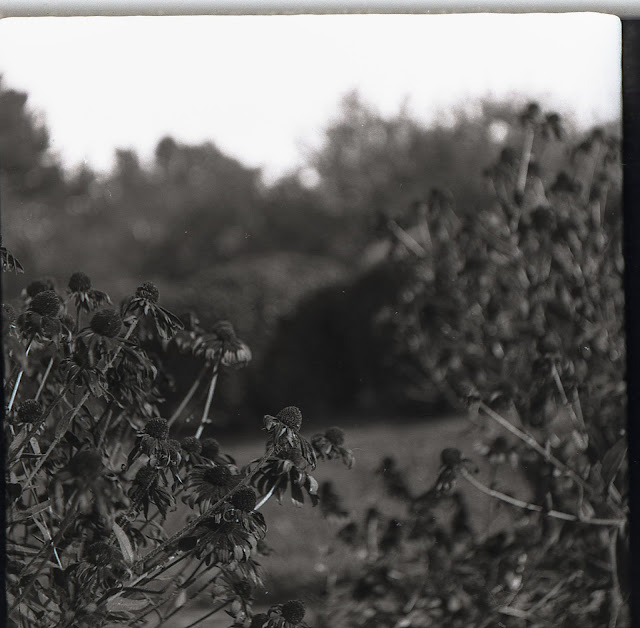 Withering Black-Eyed Susans portray in a tonality that is achievable with this film with certain colors and lighting conditions.  The spectral sensitivity of this film is likely a bit unique to other panchromatic films. 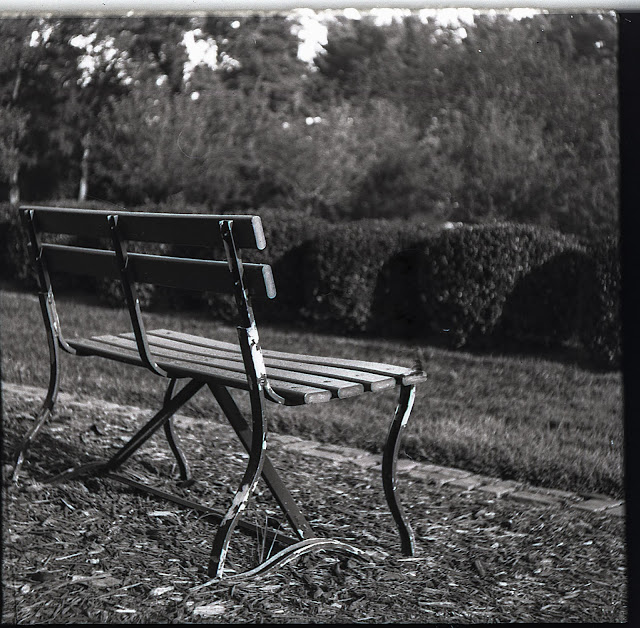 I seem to rely on empty benches a lot in some of my photos, but hey, this one works! 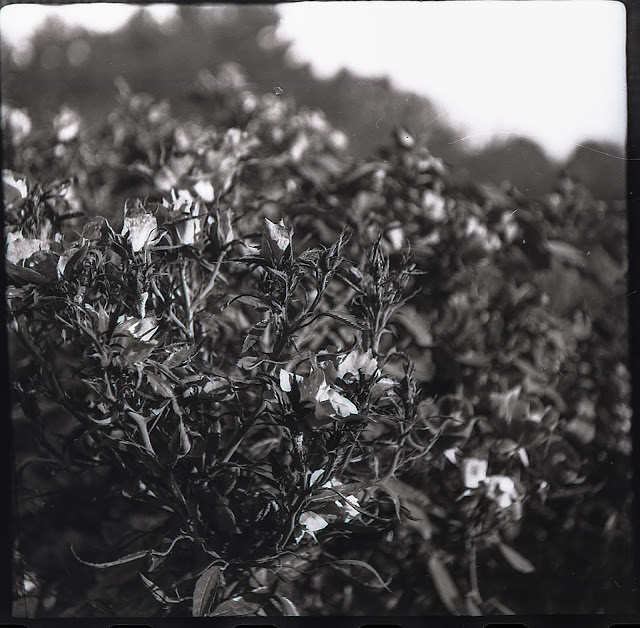 Another great example of the film's unique tonal rendering of some hues, and the great sharpness that the Bantam RF is capable of producing! 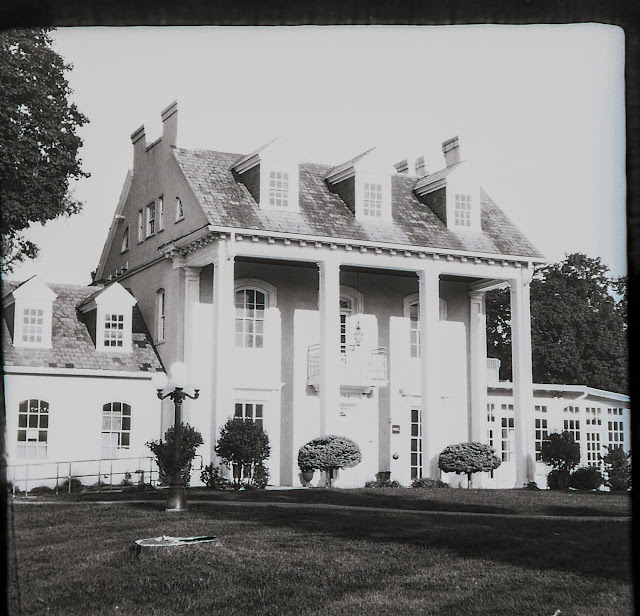 If there is one weak spot to the film, it is over-exposure.  This brightly lit scene was likely overexposed by about a stop, resulting in blowout to the front of the house. 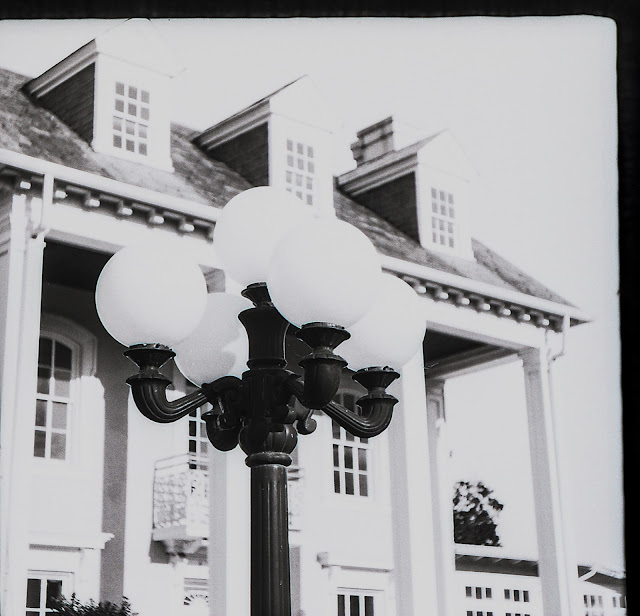 Despite some tweaking in the curves in Photoshop, the results still result in an abundance of white. 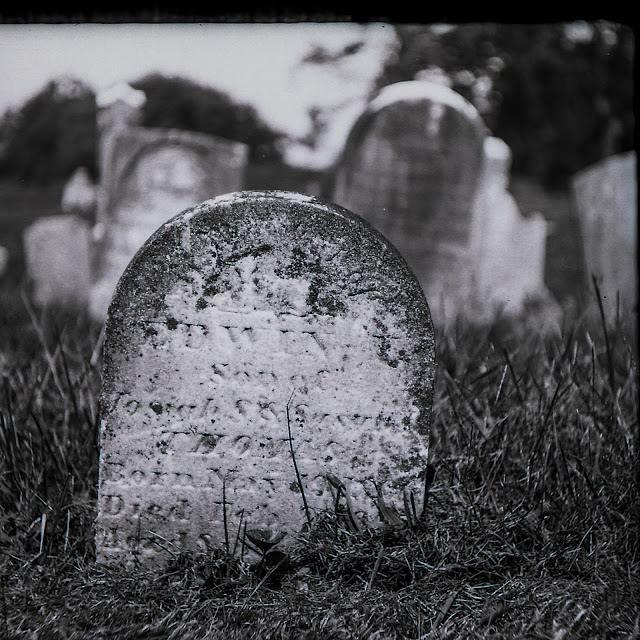 A cemetery shot shows just how effective having a film with a low speed to render limited depth of field shots can be.  Taken wide open at f/3.9. 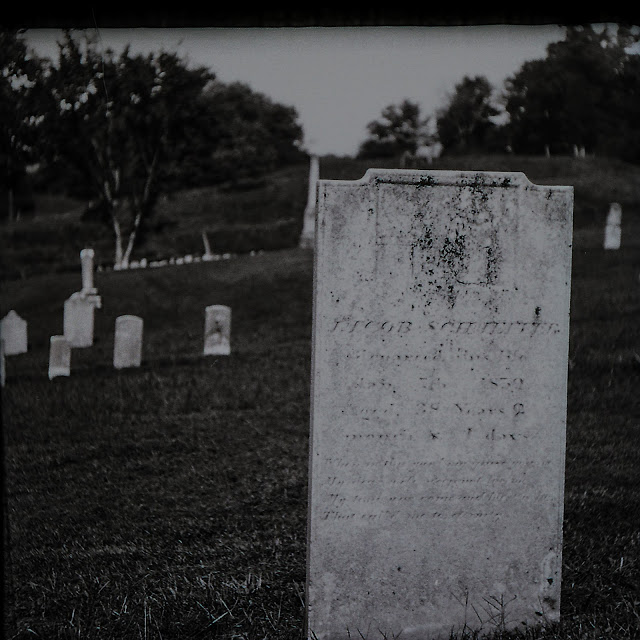 And yet the next shot taken in the same setting with the same light was badly washed out, leaving me to put a "cast" to it to make the headstone memorial readable. 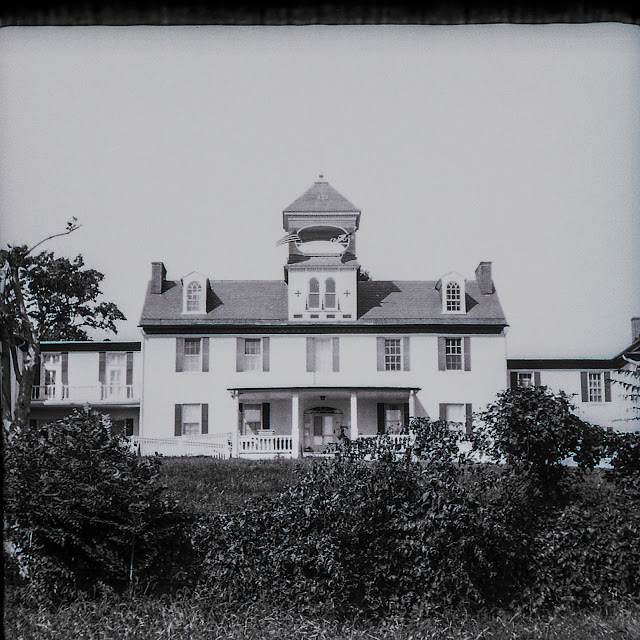 In some ways, and with some scenes, the contrast does make for some very nostalgic renderings that make for the look of period-era shots that evoke an earlier era. 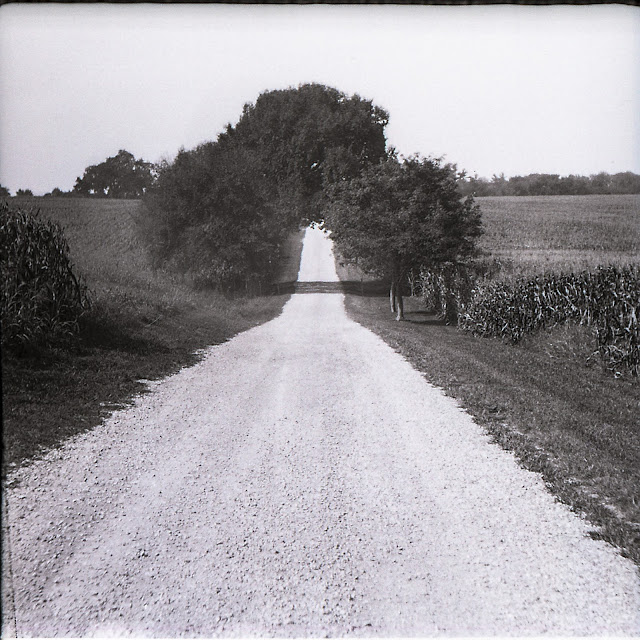 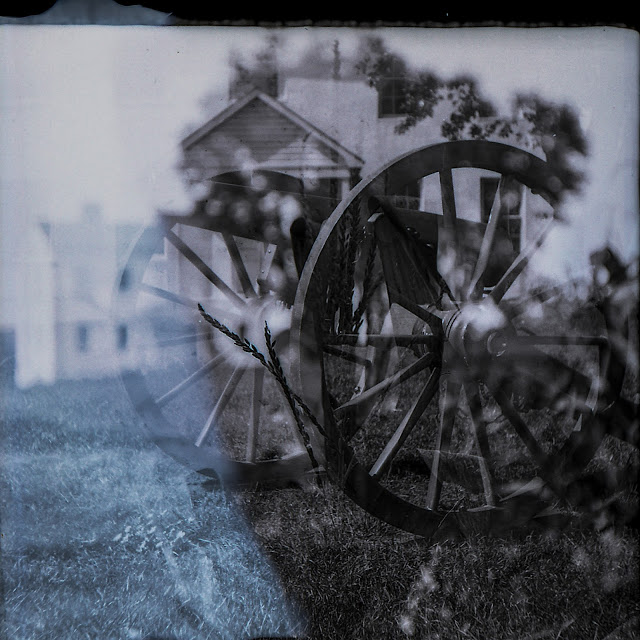 My last shot was an oopsie double exposure that shows some light piping from the loading process. Still, not bad.

Overall, I'm VERY elated with this film.  I've found a film that is readily affordable, has some fun rendering qualities, is capable of a period look, and whose speed works very well with some older cameras.  It is a great film to minimize depth of field, provided you are careful about not over-exposing it.