A Bolsey Move: The B2 Rangefinder

"Less Filling! Tastes Great!" was the tagline of one of the more memorable TV ads of the 1980's, meant to highlight the seeming impossibility that the same product (in this case beer) could achieve two things that couldn't really happen in conjunction with each other. I don't know if Jacques Bolsey was much of a beer drinker, but I'd like to think he would appreciate the tagline nonetheless.

Born in Kiev, Bolsey emigrated to the United States prior to the second World War, and had already established himself in the field by inventing the Bolsey movie camera and in assisting with the design of at least one still camera.  During the War, he developed a combat still camera, and upon the war's conclusion, adapted that design to a consumer model that would become the "Bolsey B" line. Bolsey's objective was to create a quality camera with sought after features at an affordable price. 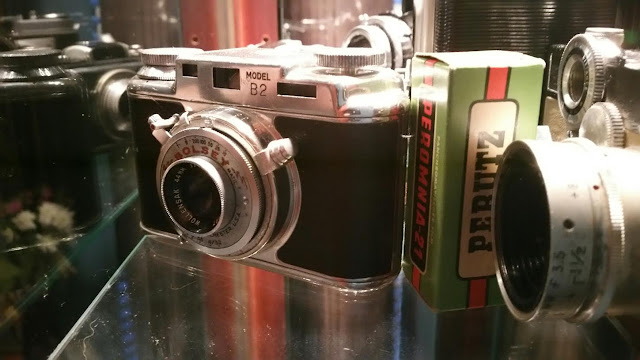 The Bolsey B2 is a pretty capable camera with a modest form factor, seemingly ideal on the surface for portable on-the-go shooting.

The Bolsey "B" was released in 1947, and was followed not too long after by the nearly identical "B2" model in 1949.  The cameras seemed to aimed not towards the general "snapshooter" but instead somewhat serious photographers in search of a more affordable option to the top end of the range, that still had a respectable feature set.  Pricewise, the cameras were roughly between that of an Argus C3 Rangefinder camera and the early type Kodak Retina viewfinder models.  Their appeal would be that of a camera that was compact in nature like the Retina, but giving rangefinder features of the Argus.  In an increasingly competitive postwar market that was gradually becoming more global, it was a gutsy move of sorts for the American camera manufacturer.

Ads on the early stretch of the B2's production run show what seems to be a pretty impressive camera for the price.  In the ad below, the svelte B2 can be had for a few dollars less than an Argus C-III kit with a flash. 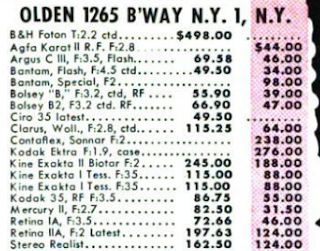 Near the end of the run of the B2 in the mid-1950's, competition was increasing, and one could get a Certo Super 35 for less than a Bolsey.

The "B" and its iterations were not the only still camera products that were produced by Bosley, but others such as the quirky C22 and the Jubilee were largely based upon the platform of the B.  Seemingly, the most common Bolsey variant seen for sale is the B2, one of which I was given by a friend who had one surplus.  Given its tendency towards the portable, I eagerly snapped it up, in hopes that it could be a great 35mm takealong on work days.

It seemed from the surface to be a really ideal camera, small and lightweight with enough range of shutter speeds and a Wollensak 44mm, f/3.2 lens that had a pretty nice reputation, and a lovely blue coating color that just made me curious what sort of images it would render.  From what I could read, the most common flaw found on old Bolsey cameras, namely inoperative shutters, was not an issue with this example, and with a quick cleaning of the glass, it was ready to go. 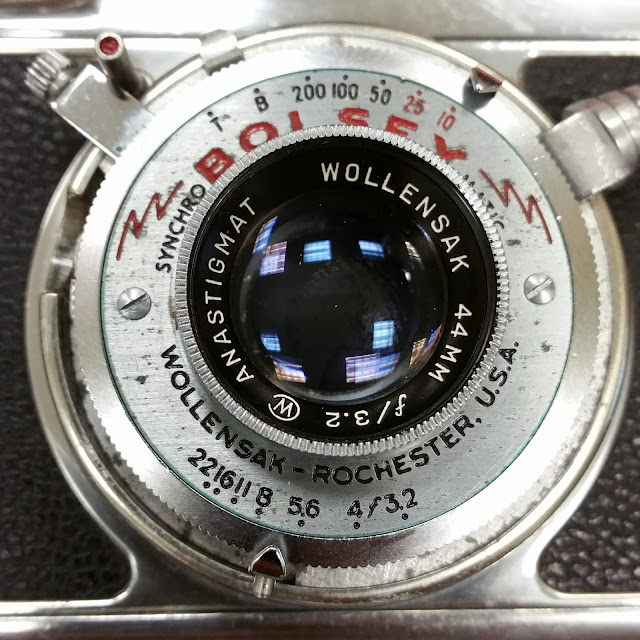 Despite a diminutive appearance, the Bolsey presents some pretty respectable specs. Besides the lens, the camera comes with 5 shutter speeds ranging up to 1/200 of a second, plus a bulb exposure setting.  The camera also provides focus confirmation by means of a rangefinder separate from the viewfinder, as well as a means of double-exposure prevention. There is no form of metering.

The first impression a new user gets when first trying out a working Bolsey B2 are in many ways dictated by the most recent 35mm cameras they have used.  Personally, I started using the Bolsey just after using the Kodak Retina 1A and the Konica Auto S2.  I loved the portability of the Retina, but often wished I would be more precisionate with focus with it. As well, I loved the ability to perform precise focus on the Auto S2, but so wished it was more pocket friendly than it was.  With the Bolsey, I had really hoped that I had discovered the ideal middle ground between the two models.

Aesthetically from a visual standpoint, the B2 is something of a glittering marvel, though some have posited that the camera seems more like a 1930's camera that was introduced much later.  There is truth in this, as the Bolsey has its share of dated idiosyncracies, some of which are dealable, but some of which grow tiresome after using the B2 for an extended period, even for a guy who likes more than his share of quirk. 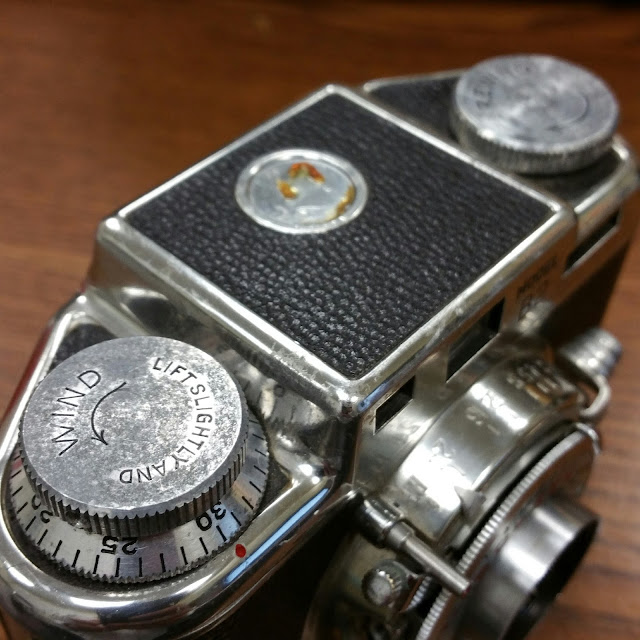 Though the Lift and twist wind lever is designed for use with one hand, the user's other hand still needs to hold the Bolsey steady to activate the advance.

The separate viewfinder and rangefinder will certainly get tiring in short time for anyone who shoots anything other than the most static of scenes.  The camera's set up will require you to often attempt to pre-set focus before taking photos with motion that can be predicted. Another tedious feature is the film advance that requires you to lift it up as you begin your advance, in order to reset the shutter pin.  In an age where more and more cameras were being released with winding cranks, this lift and turn knob system grows to be a chore sooner than you expect. 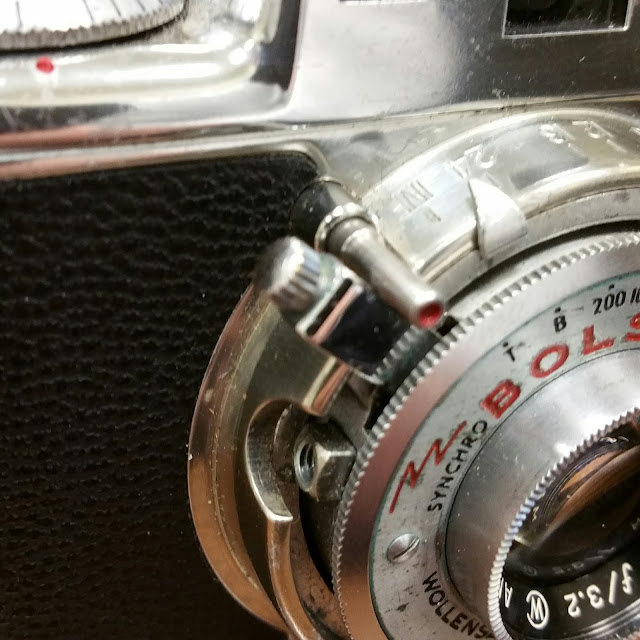 My main gripe with the Bolsey B2's operation more than any other was the shutter release that always seemed to involve me lurching a bit in the process and shaking the camera as a result.

However, the real item that seems to butcher more shots than any other is the lens mounted shutter release. Depressing this with one's eyes to the viewfinder requires a bit too much in the way of forward momentum, and I took shots that I instantly expected to be bad as I felt such a noticeable lurch in myself at the time I took the photograph.   I only hoped that my shutter speeds of 1/100 and 1/200 were ample enough to counter any such sway. 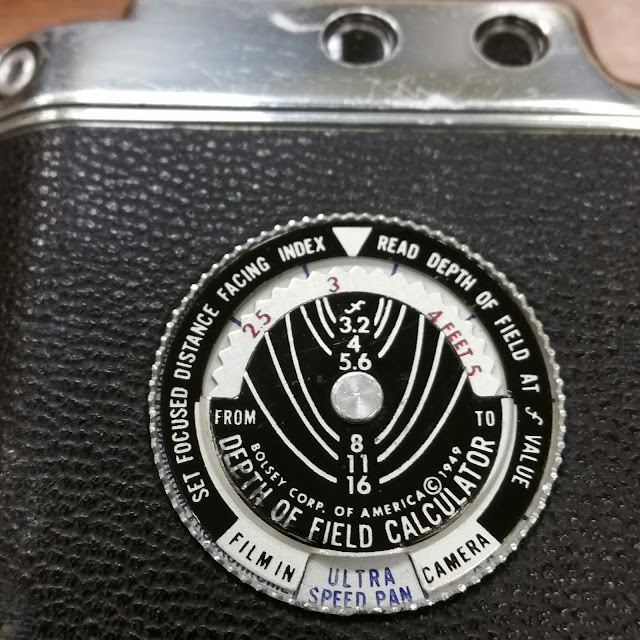 Note the separate rangefinder and viewfinder windows at top.  The depth of field calculator is neat, as is the "film reminder," which, unlike Kodak products, does not discriminate by brand.

And despite my initial enthusiasm for using the Bolsey, and for the hopes of it becoming a regular staple in my regimen, it took me weeks to finally make it through the roll of Velvia 100F I had loaded.  The feeling I got when concluding this roll was less the typical feeling of exuberance to see my results, and more elation from finally not having to shoot any more photos in this camera for a while.  Despite this, I was certainly curious to see what Jacques Bolsey's little camera had done for this roll of slides. 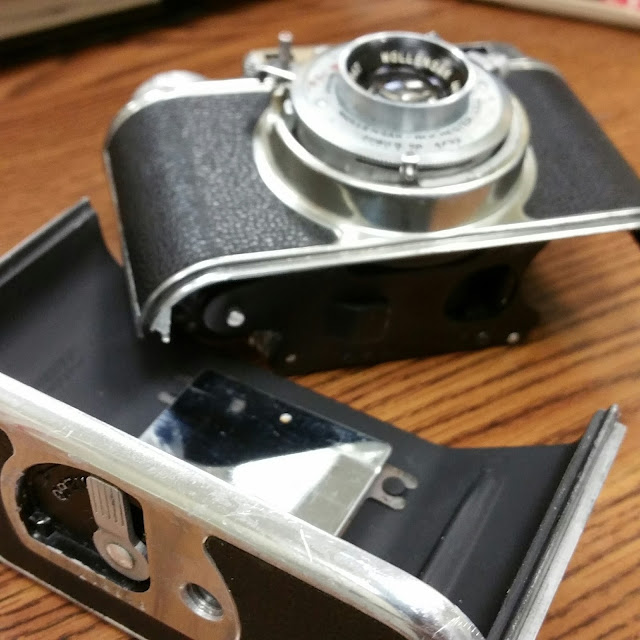 The Bolsey pretty easily disassembles for loading and unloading of film.  The lens also screws off easily to make cleaning and servicing the shutter easier.  This definitely got points in my book.  Note the reflective film pressure plate.

The results that returned were a mixed bag.  On the positive side, the camera seemed to expose the images properly for the most part, and there were a number of very vivid slides to be seen from the postwar mini.  However, as suspected, the lens mounted release was every bit of the challenge I thought it might be, as a number of images, even those of static scenes, rendered with a noticeable blur.  For scenes of moving objects, only the most well planned of the images rendered properly.  Others, well, you'll see...

Behold, the results of the Bolsey B2: 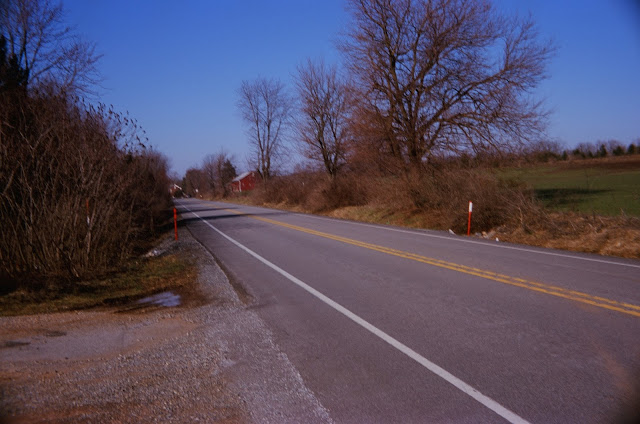 The Bolsey's first shot was taken at a random stopping point in Pennsylvania on a family drive.  With a few moments to spare, I figured this would be a good time to get a test snap in.  All in all, a bit of mushinesss in the trees, but some pretty good color! 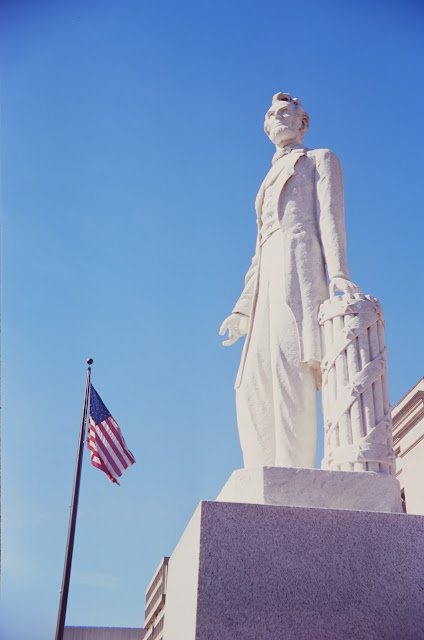 Abraham Lincoln is slightly overexposed in this view, but that may be more of me not double checking the aperture setting on taking this photo.  The aperture needle on my example moved quite easily between shots. 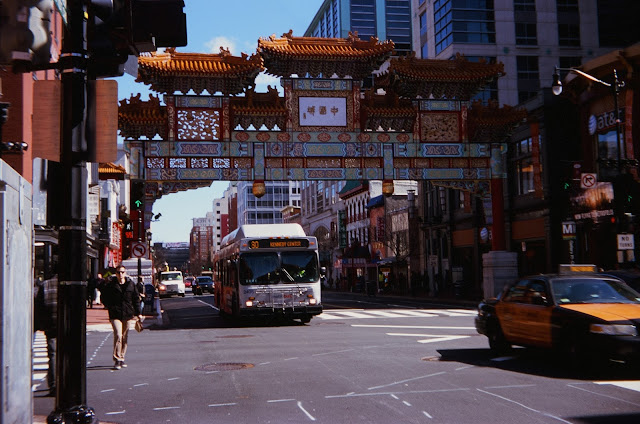 A contrasty street scene rendered nicely, though shadow detail is lost.  Note the blur in the taxicab resulting from a pretty meager top speed. 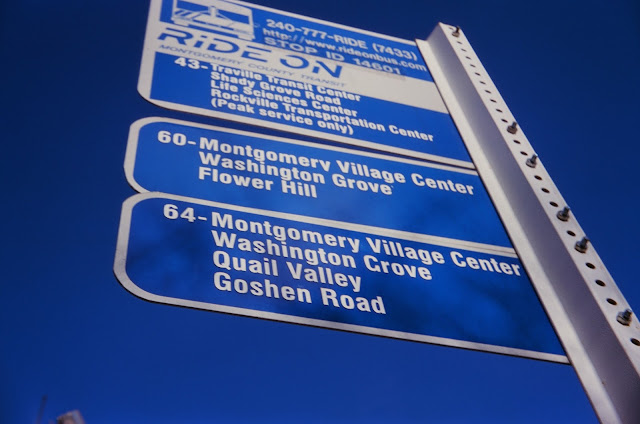 A close-focus test at the Bolsey's 2.5 foot minimum shows a particularly good result.  Excellent rendering of the blue end of the palette through the Wollensak lens. 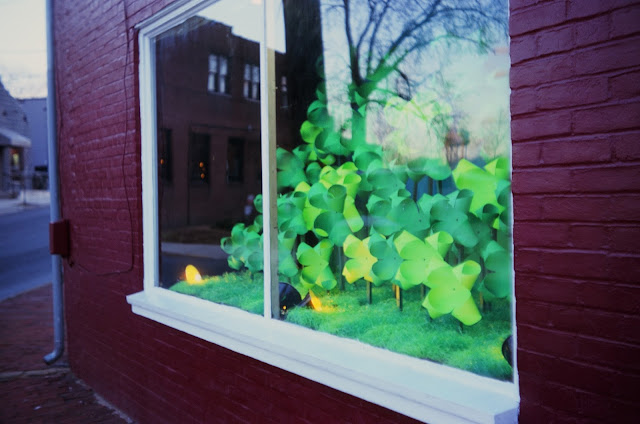 Shot wide open at f/3.2 in waning light, the camera rendered the backdrop with a pleasing soft focus while delivering a crisp foreground. 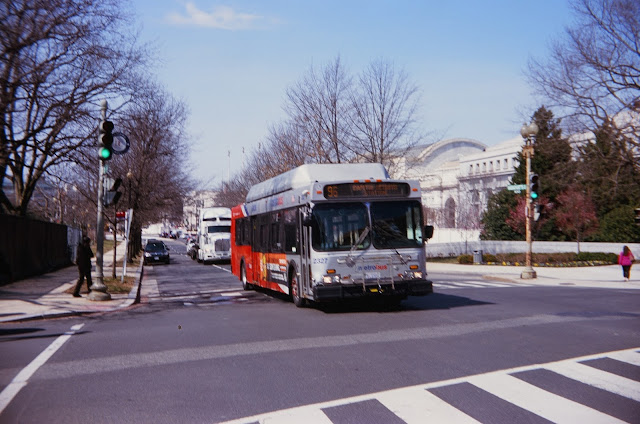 The Bolsey is not a "spontaneous shooter."  I attempted this shot with a guessed pre-focus of about 25 feet and even at top shutter, I got motion and camera shake from trying to rush the shot. 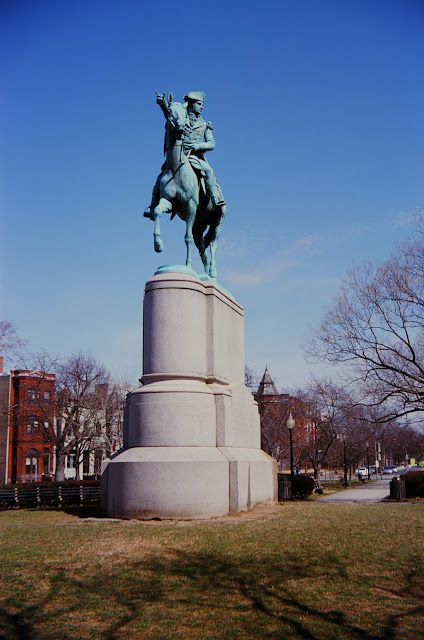 For static items that one can gradually focus and compose, the Bolsey does pretty well.  The color rendering leaves nothing to be desired at all. 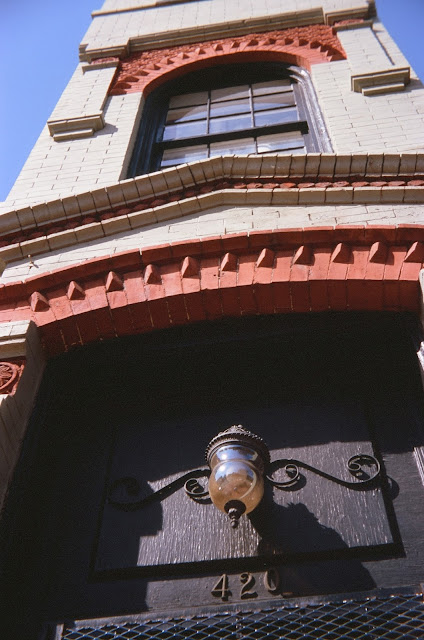 I focused upon the lumiere in foreground, and the Bolsey delivered.   While the separate rangefinder and viewfinder leave much to be desired, when used well, they could deliver superb images. 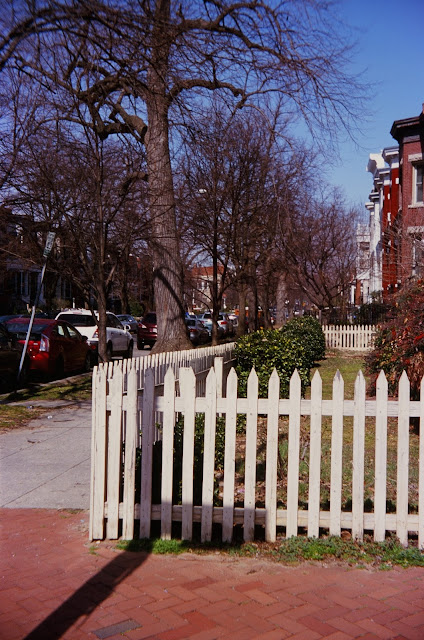 One thing I did like about the Bolsey was a seeming ability to distinguish the subject matter and put just enough out of focus render on the backdrop to draw the attention forward. 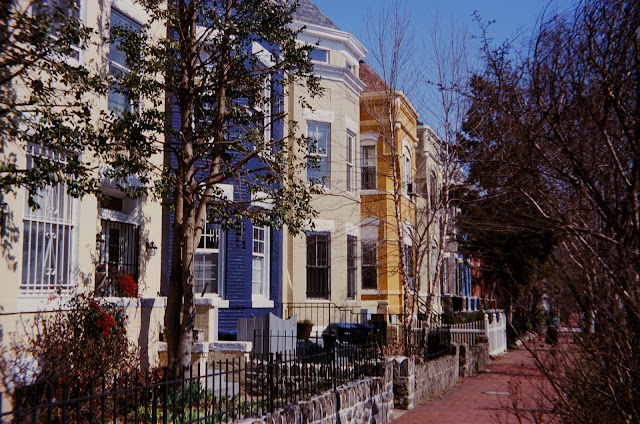 Varying hues were rendered in a contrasty manner on the Velvia 100F on the Bolsey's coated lens. 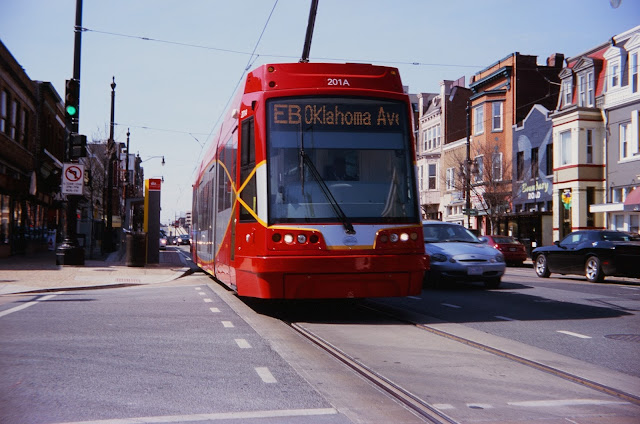 An "action" shot made possible only through pre-planning of the focus point and a steady hold of the camera.  The Bolsey B2 requires a healthy amount of guidance to deliver upon its respectable specifications. 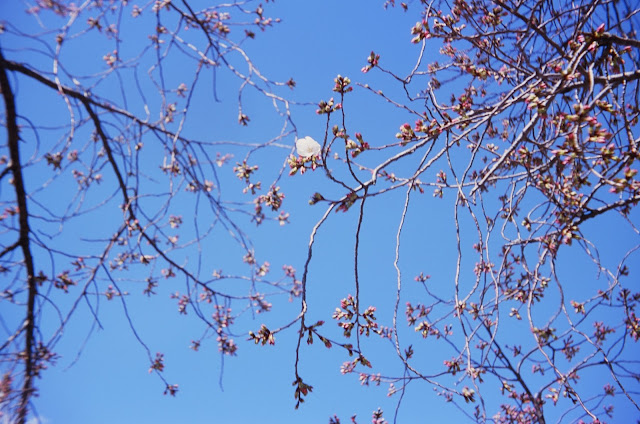 In some ways, the B2 has a very pictorial rendering nature, thanks to the slight vignetting around the corners.  This can lead to some very pleasing shots. 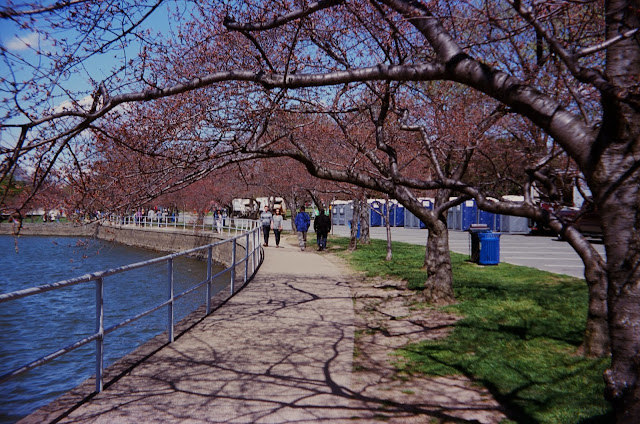 In scenes of many hues, the Bolsey tends to lean towards the cooler end of the spectrum in its contrasty renderings. 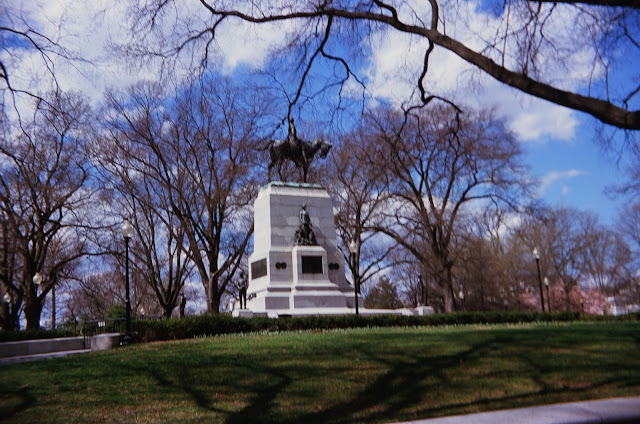 Despite a static scene and a good shutter speed, too many shots on the Bolsey rendered like this, with notable deficiencies in sharpness on the corners and detectable blur from the shutter release location. 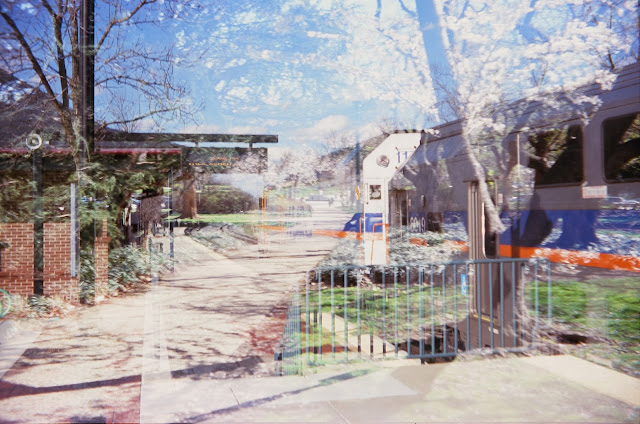 Despite having a measure intended to prevent double exposures, the less than intuitive advance and shutter linkage still resulted in accidents like this - an unintended double exposure.

All in all, the Bolsey put forth some decent images for the most part, and I was able to observe some strengths in its small form factor and feature set.  However, the camera is actually a bit less versatile than other small cameras I have which lack a rangefinder. All told, I'll certainly use the Bolsey again, but it may be a while.  And I doubt I have the patience to run a full 36 shot roll through its chambers.  It's a nice enough camera, but it won't make the list of my favorites in the way I had hoped.
at 08:00