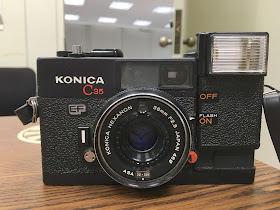 
At the time I snapped it up, this camera was not one that I specifically coveted. Rather, it was more an extra bonus tucked amid a bulk camera lot.  It was a camera that I was admittedly glad to have, yet felt no need to quickly rush out and use. I had given it only a cursory look consisting of a quick wipe of the Hexanon lens, a swabbing of the battery contacts, and a brief check of the meter and shutter to come away with the impression that this camera "seemed to work," after which I shelved it for a future occasion, the advent of which I expected to occur months later than this October day.My ambivalence towards this Konica stemmed from a number of factors. First, it is a complete auto-exposure camera. There is no choosing aperture or shutter speed on the C35EF. One simply points and clicks, entrusting the (now several decades old) mechanics to get the exposure right. The only control one has is setting the film speed, and the only indication that the camera may be doing what it should is a match needle in the viewfinder denoting the aperture. In addition to the somewhat blind faith of the exposure system, this camera comes with an obvious enhancement at the time it was made, that serves mostly as a bulky nuisance today: an electronic flash unit. The result is a camera that is blocky and inelegant, exuding all the aesthetic charm of the "Family Truckster" of Vacation fame. This feature would be great if only I was looking to take some film photos at my child's birthday party, but is superfluous for the vast majority of my hobby shooting.  Finally, in integrating the built-in flash to this variant, Konica squeezed out one of the handier features of the original C35 camera from which it descended: the rangefinder. The C35EF offers us only a "guess focus" ring with particularly short throw with which to focus.  This focus dial is aided by a foursome of click stops embellished with symbols for typical snapshot distances for portrait, group photos, and landscape photos. Thus, a C35EF is just like a C35, minus both the compact form factor and convenient rangefinder, but with a bulky flash. 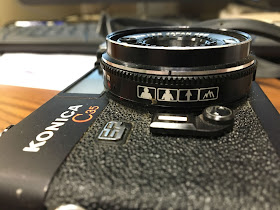 Focusing the C35EF is done by guesswork, using either "cheats" via the icons above, or using the distance scale, with a whopping 3/4" of throw for the entire range. 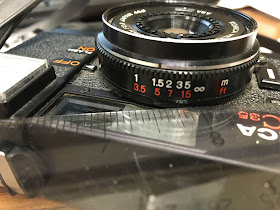 Once you overcome it's awkward looks and get cozy with its limited functionality and short focus throw, the C35EF actually isn't all that bad of a camera.  In fact, it is actually an excellent camera at its core.  At each of my handful of stops in varied light, I was at least impressed to see the viewfinder needle pointing more or less where I would likely have it if using the "Sunny 16" rule.  Sure, the camera doesn't exude the superlatives that many camera junkies love to rave about. The shutter release doesn't feel "refreshingly nimble," nor does the film advance feel "amazingly fluid," but given that this is a camera designed for Aunt Clara's Retirement Dinner or the like, I really can't complain about it. It simply does what it does in a rather utilitarian fashion, which at the time I'm shooting it, is more than I can say for the German import sitting at home. 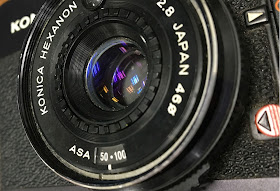 Even on a basic camera like this, I can find some quirk.  There is only ONE available "dot" setting for ASA between the main settings like 50, 100, 200, etc. Thus, if you shoot film rated at 64 or 80, you either choose this single "75" mid-setting, or elect the 50 or 100 settings.   Note the filter threads available on this camera.
And of course, even if a camera looks and feels good when shooting, it is hardly much use if it returns poorly exposed or badly focused images.  Having good photographic results is, after all, one's main objective in this hobby, and if there is one thing that would make or break this chunky camera, it would be the results.  I was certainly curious to see what would result from this camera, particularly given that I was shooting with a mysterious film. 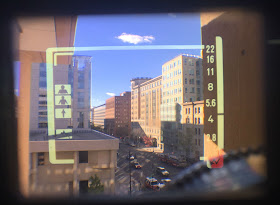 Viewfinder of the C35EF is nice and bright, offering a clear view of focusing distance as well as aperture (note the tick between 4 and 5.6) along each side.  The red indicator at bottom indicates needed use of flash when light levels do not support shooting in existing light.
So how did this chip off the old block do? Impressively! While my shooting environment admittedly wasn't the most demanding, the Konica still gave me a roll of generally well exposed images that were focused perfectly. A few of the more brightly lit scenes were a bit overexposed, but only slightly.  Still, I do feel confident that I can pick up this camera and use it with confidence. And in the few times where I might actually need a flash, there is certainly no forgetting it is there.As to the mystery film, my suspicions were confirmed that this is indeed Imation (Ferrania) film, which scanned in quite well. I look forward to snapping up some more of this 2010 vintage film and putting it to good use!  And meanwhile, the lovely little German camera still sits sidelined despite further attempts to get the film advance spool to catch!  I kind of get the feeling the C35EF will see some additional action before it does. 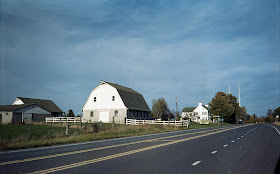 Focused at infinity for a landscape, the C35EF returns a sharp image with a bit of light fall off around the corners.  The focal length is certainly evident as a departure from the feel of a standard 50mm length. 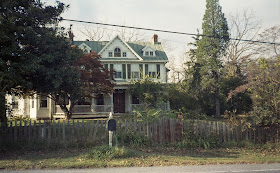 Under soft lighting, the camera and film combined to create an image that was rather warm in tone, with a slightly green hue, but still bitingly sharp. 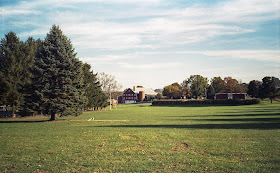 The wide focal length does prove problematic in pulling some distant details into prominence.  This barn was certainly far closer than this photo conveys. 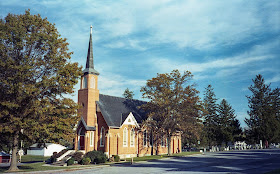 For other scenes, the wide angle had some advantage, such as getting a photo of this church without the foliage obscuring it. 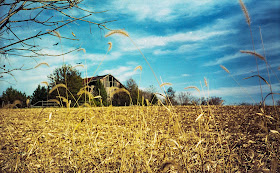 Two shots of about the same scene.  The photo above taken to focus on the foreground, while the photo below focused on infinity.  Both rendered well, but the near focused scene tends to carry too much depth of field to obscure the background as desired, an example of the limitations of this camera and its lack of settings. 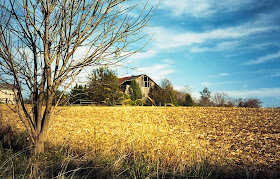 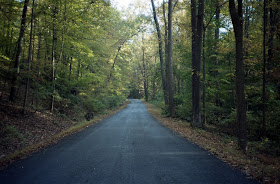 Under lower light and wider aperture, the sharpness is still good, but not as good as under full sun. 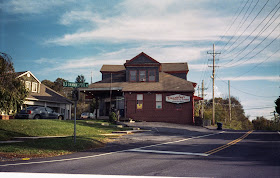 The Konica and Imation film combined to give decent shadow detail in scenes with varied lighting such as this shot of the old Braddock Heights Station. 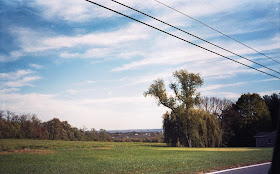 Peering into distant scenes, the wide angle again comes up short in conveying the sense of scale evident here. 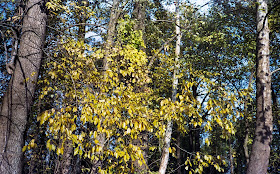 I set the focus on this between click stops, at roughly 15 feet.  It seems that the lens does a very good job of giving accurate focusing. 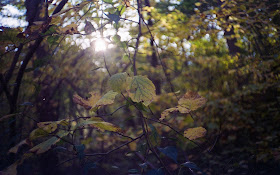 At the closest focus setting of about 3.5 feet, and in a darker environment requiring a wider aperture, the Hexanon lens did a very impressive job, giving excellent sharpness to the leaves in foreground, as well as a magical bokeh to the backdrop behind. 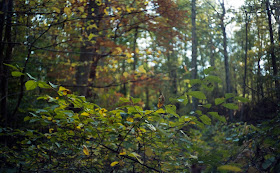 At about a 5 foot focusing distance the results aren't quite as nice as the photo above, but they still are a nice surprise from this otherwise pedestrian looking camera.