The Zenith of Quirk - The Comet Camera

Beginning in the late 1940's, Bencini of Milan Italy produced a number of uniquely designed 127 cameras under the "Comet" name, culminating with the very distinctive vertically situated Comet III of 1953 that remains today as a highly distinctive and desirable camera among collectors, fetching prices of over $100 on the collector market.

This review is however not of the Bencini Comet.  I may be a quirky guy with a camera but I am also a frugal guy with a family, so my likelihood of picking up a Bencini Comet are pretty slim.

However, I was fortunate enough to pick up a very distinctive 127 camera from the same era, also vertically oriented, and also bearing the Comet name, but made half a world away in the United States by Zenith Camera Corporation. 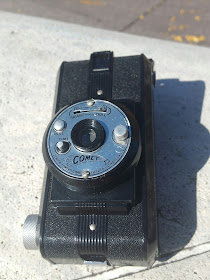 While a significant amount of American 127 cameras sold in the post war era tend to be of a nearly identical design consisting of using the "half-frame" 127 format and a fixed focus lens, the design of the Zenith Comet is completely distinct from these cameras, and features:

When I spotted the Comet for sale at every camera collector's most beloved and reviled auction website, I just knew I had to partake of it.  I'm not even sure that I was aware of its full "feature set," but I was smitten by its novel design, and lured by its cheap acquisition cost.  On it's arrival, I was really intrigued by the novel design, and honestly could not wait to get acquainted with it, and run some film through it. 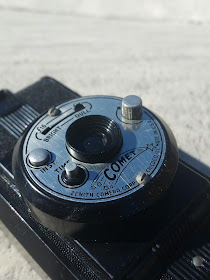 Unlike most base level 127 cameras of the era, the Comet requires pre-tensioning of the shutter by turning the knob to the right.  In pre-testing of the camera, I found it best to rotate the dial back to its original position after cocking to ensure the lens is not obstructed.  Different buttons allow for normal and time exposure shooting, while an aperture switch at top changes the diaphragm opening. 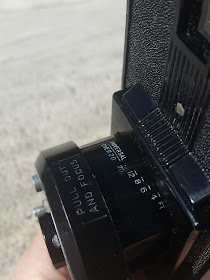 The most interesting feature of the Comet is the ability to set a focusing distance, based upon marking on the slide out lens barrel.  This feature made it easy for me to remember to extend the lens in the first place (unlike my early tries with the Univex Iris) though I found that the lens barrel was prone to uneven extension that would likely impact image quality. 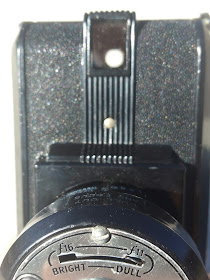 While the Comet can be used in either a vertical or horizontal orientation, it is situated more for the portrait layout.  Above the lens barrel is the viewfinder that oddly peers through the camera body itself, making me worry about the possibility of light leaks. 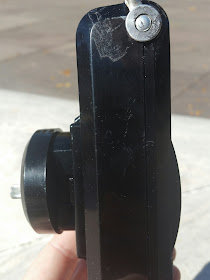 Side profile of the Comet shows the curved film plane, an attempt to extract as much sharpness as possible from the small simple lens.

Upon its arrival, I wasted very little time slitting a roll of TMAX 100 down to 127, and took the opportunities that a unscheduled leave day provided to put the camera through its paces. I really didn't know too much of what to expect of such a cheap but adjustable camera, but figured it all to be part of the fun.

And shooting the Comet was, for the most part, just that. The camera provides just enough crude control to make you feel like you have some input into the final result of your pictures, but enough limitations to cause you to plan your use of the camera accordingly.  With the 100 speed film loaded, I was fortunate to have a mostly sunny day at my disposal to test the camera, so I never felt like I was trying to do too much with the Comet and push it beyond its capabilities.

After developing the first roll, I was actually somewhat impressed when looking at the negatives, but discovered after scanning that my initial impressions were a bit premature. This is after all a very rudimentary camera trying to coerce its capabilities well beyond its hardware, so tempered expectations for the results are a must. 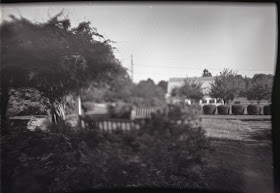 Right off the bat, my first photo taken with the Comet was a disaster.  Despite trying to focus on the bushes in the mid-ground, the result looks far more impressionistic.  The film may not have been situated properly on the film plane. 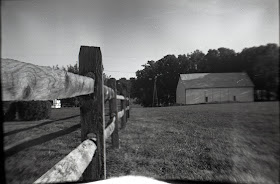 By the second image however, I'm seeing a little bit of potential to this odd camera.  The focus on the first fence post is actually pretty close. 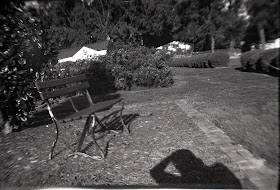 It's not quite what I pictured when taking this photo, but there are some sharp elemens in the bushes in the center of the image.  Shame I set the focusing distance to about where the bench is situated. 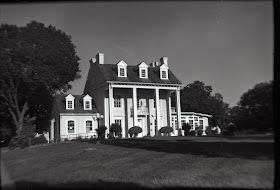 Wow, this one actually isn't bad! With focus set on the "Universal 20 Feet" line, I snagged this image in strong morning light. 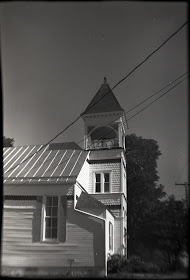 Again, decent image sharpness in the center of the image, though some marked fall off by the sides and corners.  Still, an interesting result. 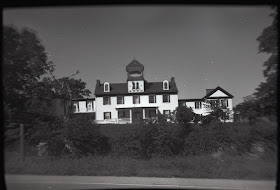 Film plan flatness seems to be a definite issue with the Comet.  Here, the right side of the image actually appears to render a bit more sharply than the center. 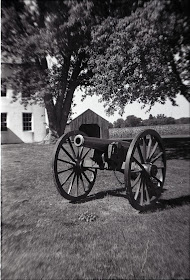 My favorite shot of the first roll, focused perfectly on my subject while adding a muted foreground and background at the edges to provide great separation. 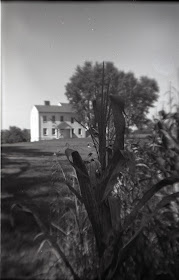 Naturally, I had to test the focusing distance in practice.  The above was focused at about 6 feet while the below was focused for infinity.  The corn stalk appears nicely focused in the first image while the tree, indistinct in the first image, appears in sharper focus below.  Oddly, the farm house doesn't look particularly sharp in either image.  These two images also bring to light a very interesting trait of images taken on the Comet: those taken at closer distances actually give off larger images on the negative than ones taken at infinity.  The above image measures roughly 40mm x 60mm while the below image sizes up at about 40mm x 55mm. 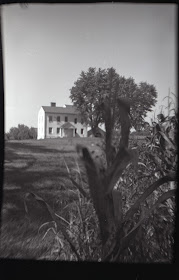 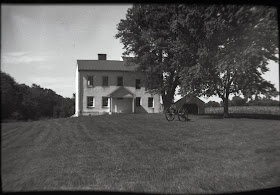 One final shot on my impromptu day off.  Still, not the best result, but very nostalgic in nature.

Armed with a good stash of Portra 160 and having enjoyed my rambles with the Comet, I could not resist giving it another try in color, as I tried to exploit some of Portra's nice tendencies when overexposed.    Developing this extended length 127 film was a particular challenge given that my 127 steel reels are designed for normal 127 length film, leaving me to have to attempt color developing in a particularly tricky "FR" plastic tank. 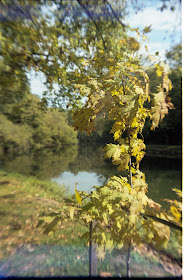 Terrible image sharpness along the sides, light leaks evident as well, and yet I really like how well the leaves on the small tree were rendered in this photo. 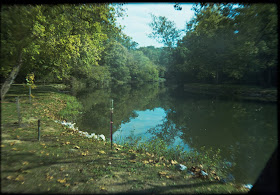 Another distant shot taken at the same location doesn't render quite as well.  Yes, the sharpness is overall better, but the color rendition isn't as nice as the image above. 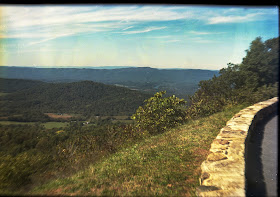 A shot taken from Skyline Drive shows some parts of the image and focus and others not so much.  I don't care for the color rendering of the stone work to the right. 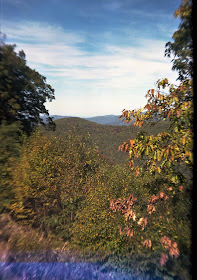 Another shot taken in the same vicinity tends to render a bit better, given the meager lens attached to the Comet camera. 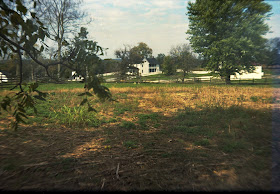 Two images taken at Antietam National Battlefield show how color can seem to be often be rendered in murky tones on the Comet, even with good film, when light is not perfect in a given scene. 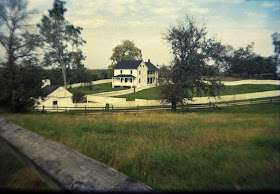 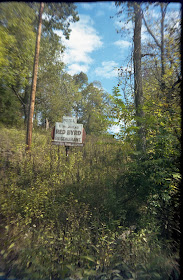 In hindsight, I wished I could have been closer for this capture, but with a toddler in the car on the shoulder of the road, I didn't have a lot of time to spare to perfect this one. 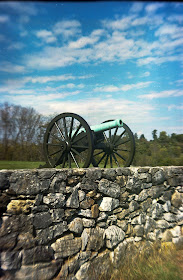 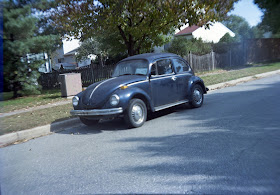 A classic VW should have provided a better result than this, but in hindsight, I should have taken more time with the set up of the capture as well. 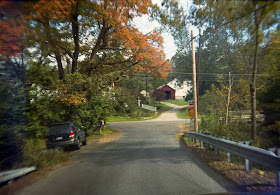 I'm not sure if camera movement or poor focus are the culprit to the blurry look to this image. 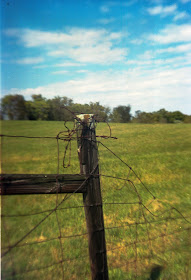 Not the most stirring subject matter perhaps, but a good chance to test focus and color rendition under full sun.  All in all, not too shabby. 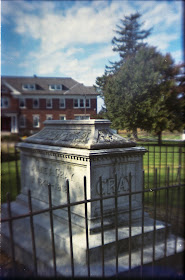 Seems that scenes of about 10-15 feet away tend to render with the best center sharpness, though that sharpness is not perfectly centered.  Still, given the subject, I tend to like how this interesting scene taken in Mapleville MD rendered.

The Comet is a camera that tries to use nearly every trick in its limited employ to give the user the chance to control and coerce their image to every extent possible given its limitations.  The results of this limited flexibility aren't always predictable even after using the camera multiple times, but in many way, this unpredictability can be fun, provided you are simply using the camera as a means to have fun.

Many of the film cameras available today as part of the Lomography movement are very similar in principle to the rather obscure Zenith Comet of 1947, employing a minimal amount of controls on focus or exposure to create an experience that provides a mix of control and experimentation to create a fun photo taking experience.  And this is precisely the feeling one gets when shooting a Zenith Comet, accompanied by a interesting sense of reverence that this odd camera may well have been an innovator of sorts that has since been mostly forgotten.

One thing I do know is that I will certainly remember this camera is in my collection when I simply want to go out and have a bit of fun enjoying my hobby.
at 09:00
Share