The Peculiar Paradox of the Perplexing Pickwik

To ponder and postulate the perils of my predicament was particularly problematic.  Phooey!

Sure I'm a "camera collector," but not in the most literal sense.  I like to limit myself to working examples of everything I might acquire and I most certainly seek to run at least one roll of film through everything I may have the fortune to pick up.

A few weeks ago, I happened on a bargain of a lot containing 7 cameras that I snagged for just over $20.  While it was just one camera of this batch that really drew me in, I hoped that at least some of the other more basic cameras were in operable condition to be able to use a time or two as well.  Who knows?  Maybe I would discover a new favorite from the motley assortment.  In a marked departure from my usual luck, it turned out that all 7 cameras had fully working shutters and appeared to need just cleaning to be ready to try out.

One of the more interesting cameras in the batch was an unusual little guy branded as a "Pickwik." It is a true pseudo-TLR complete with two lenses and a small flip up screen designed to frame fixed focus shots in the 3x4 format on 127 film.  Armed with only settings for "Time" and "Inst," it is a particularly simple if interesting little camera.  I gave it a quick look over to get an idea of its operation and put it in the queue for eventual usage. 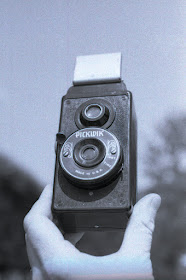 A unique and certainly oddball among 127 cameras of the era, the Pickwik "TLR" was an interesting pickup for me.

As it turns out, the odd little camera would be the first of this group to be pressed into service.  As I worked my way through my 21 roll assortment of D-i-Y color films, I had some headaches in advancing a roll of 127 film through my Foth Derby.  I realized only later that this turned out to be that I'd used a single ended spool on the take up side of the camera and it was facing the wrong way. Still, I looked forward to the chance to get a few snaps with the Pickwik, and since I had to open the camera in the dark to re-situate the take up spool anyway, I figured I may as well complete the rest of the roll in the Pickwik instead.  I gave it a quick cleaning with cotton swabs, loaded the film and shot the last 6 shots in this unusual little "TLR" camera of sorts. 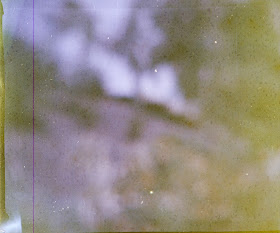 "Measure twice, cut once," they say, and I ignored that sage advice.  In my haste to run through the roll, I'd never taken a minute to ensure that the camera was putting forth an in-focus image to the film plane.   And upon later inspection, it definitely wasn't.  I noticed that the only time I'd get something resembling an in-focus image on a matte screen was when the camera was about 6 inches away from the subject.  Macro 127 anyone?

Was perchance the Pickwik's prevailing penchant to portray the puny?

Not hardly - the manual states an optimal subject distance of 8 feet for best results.  It seemed as though the distance between lens and film needed to be measurably less than what it was, yet I had no idea how to accomplish this. And I certainly had no idea how this seemingly simple fixed focus camera had gotten such a significant disparity in this distance in the first place.

So is the Pickwik's pratfall perturbing or potentially positive? And perhaps despite my persisting pessimism, should I pick a pragmatic position to prevail?

Depends really.  All I did know however, is that before I went through the trouble of trying to fix this camera, it seemed only fitting that I give it a try in its odd little focus sweet spot with part of a roll of Ilford Pan F 50.  It made for a fun little exercise, but certainly one which offered little in the way of framing assistance thanks to the extreme parallax error between the "viewing lens" and the "taking lens."  Such was fine anyway, as the amount of dust on the camera's mirror made looking through the viewing lens a challenge in the first place.

Prefer to proffer some photographic proceeds and put a stop to the playful prose in this petulant post?

Gladly!  Below are the results from my close focusing test of the Pickwik.  As you can see, I did get some surprisingly decent results from this test.  Since then, I've tried disassembling the lens assembly and reassembling the whole thing with the lens reversed, only to see the same sort of results.  It seems this odd little Pickwick may have to find a spot as a whimsical and peculiar macro camera in my collection! 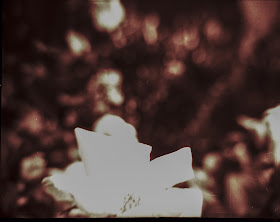 My first attempt seems to get the correct focus, but the long exposure time results in a blow out of highlights on the "fast" film. 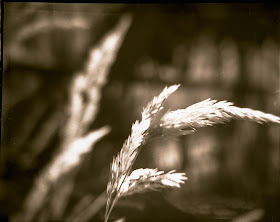 Another stab in the proverbial dark shows that one CAN achieve a close macro focus on this camera in the center, with its simple lens. 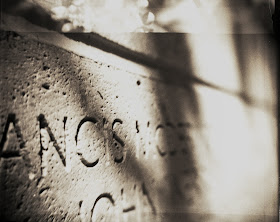 On yet another try, I elected to shoot towards a wall that moved away in the distance from the camera, ensuring something would be in focus.  Despite that point being a bit off center, the lens still rendered the shot with an almost ethereal glow. 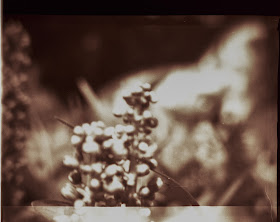 Other tries were not as fruitful.  Take for instance this macro of a flower.  Good framing, but the focusing distance is a miss. 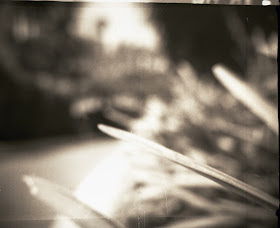 And sometimes that didn't wholly matter.  The whimsical bokeh creates a very surreal landscape on pretty much anything beyond 6 inches from the lens. 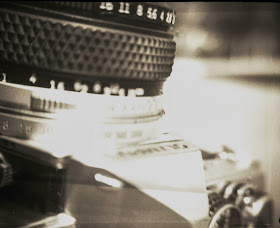 Holding the camera steady was sometimes a challenge, and in this case, there seems to be some motion blur further throwing off the image.  Still, the numbers on top of the lens are easily readable despite being on the edge of the frame. 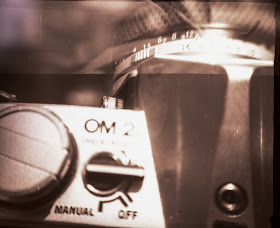 Another try, another result that I can't say I dislike in the grand scheme of things. 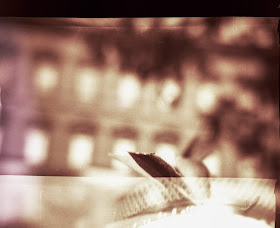 Finally, an unintended composite of the last image plus a leaf macro.  Winding the Pickwick according to instructions causes overlap of frames.  Definitely a lesson to keep in mind if I mess with this camera again.